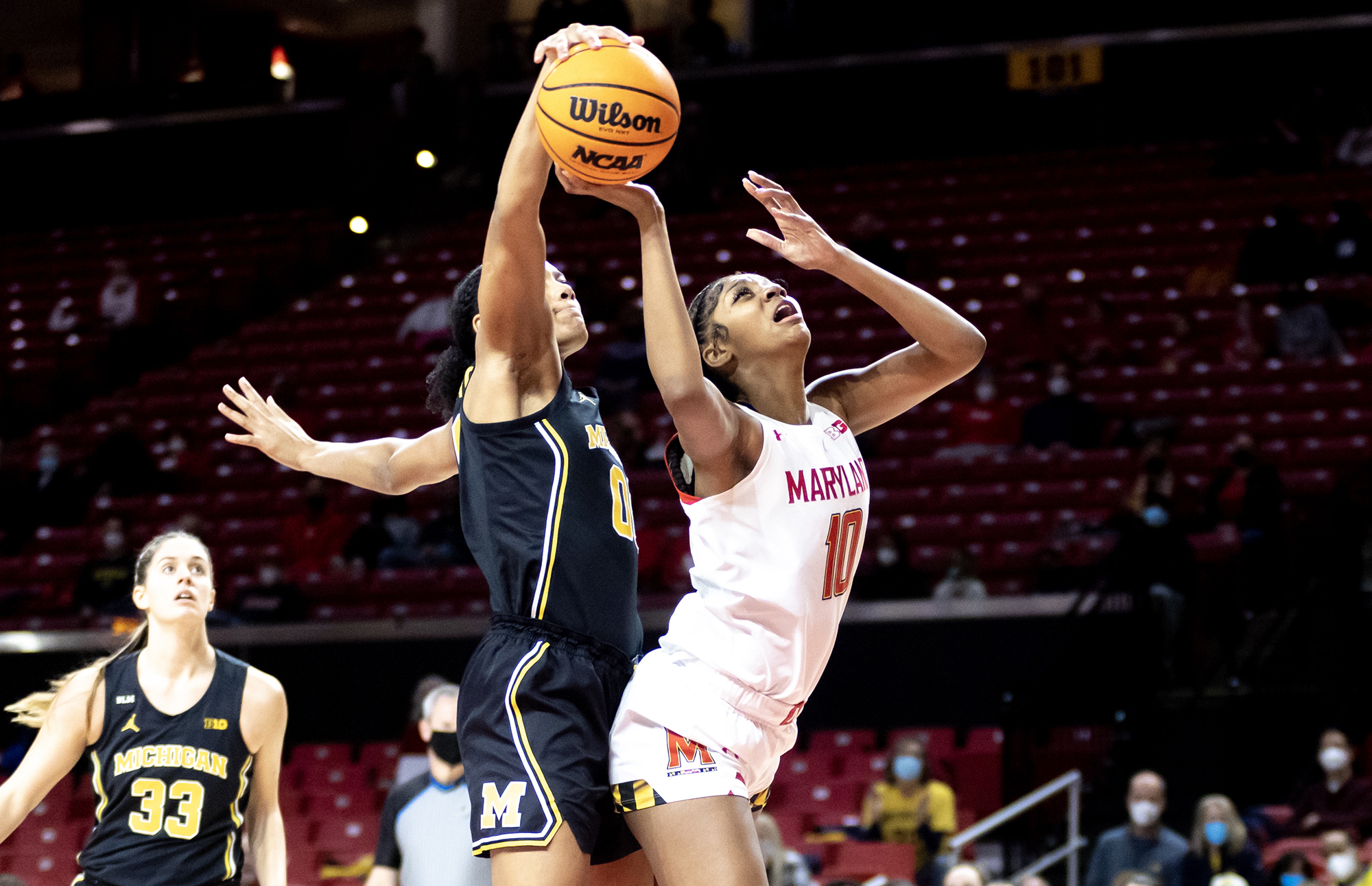 During the No. 13 Maryland women’s basketball team’s eight-game win streak, the team had bought into a more cohesive defensive approach.

The Terps excelled at translating their defense into offense over the recent stretch. But in a rematch against Michigan on Sunday, the defense couldn’t contain the Wolverines’ offense.

After Michigan took control of the contest in the third quarter, Naz Hillmon kicked off the fourth with a crucial and-one, sending Angel Reese to the bench after she picked up her fourth foul.

A 48-43 lead was built on the rugged inside play by Michigan, but the lead grew to eight on the next possession thanks to its quiet, yet lethal outside game.

Danielle Rauch hit a thunderous three-pointer at the 7:51 mark, causing coach Brenda Frese to call a 30-second timeout. The three brought back haunting memories of the last meeting between the two squads — a game in which the Wolverines hit twice as many threes as the Terps.

It was this variability from the first place Wolverines that had Maryland out of sync throughout the contest, resulting in its first loss since Jan. 20. The Terps fell in a tough road outing, 71-59.

“You saw the physicality, it takes a lot of work with the style of play that was being played,” Frese said. “I thought we got tired. Our shots [were] not falling, missing point-blank layups, free throws — things that we typically are very good at.”

The Terps found themselves in a position to seek revenge after losing to Michigan at home on Jan. 16, 69-49 — their lowest offensive output of the season.

A cold start from Maryland prompted Frese to substitute in Ashley Owusu. The junior guard had been out of action with a sprained ankle since Feb. 3, and offered the slumping offense with an extra dimension.

Owusu was merely a smokescreen, however, as Maryland found offense elsewhere. Mimi Collins drilled a pair of midrange jumpers on back-to-back possessions to bring some life to the offense after the team started 0-for-5.

Another drought ended after a smooth Katie Benzan three tied the game at 11. Reese then put her team ahead before the period ended.

The streaking Terps found a way to enter the second quarter with a leg up on the Wolverines. In the last meeting, Maryland had to wait until the fourth quarter for its lone advantage.

While the Terps weren’t blowing the doors off of the Big Ten’s second-ranked defense, Michigan’s share of struggles gave them the early lead. The Wolverines committed 15 turnovers by halftime which kept their offense out of its rhythm.

Frese’s squad also hit the bonus with just under three minutes having passed by in the second quarter. This gave Maryland a plus-11 free throw attempt margin, which was a key factor in its latest victory against Ohio State.

Despite the plethora of advantages and having drawn three Michigan starters into two fouls apiece, the Terps entered halftime tied at 24 due to a 16.7 field goal percentage in the second quarter and 28.6 percent clip overall.

“It was just one of those days,” Shyanne Sellers said. “I feel like we were getting open looks and we were getting good shots, but they just weren’t falling. We started attacking a little bit too much and we didn’t kick the ball out.”

The timid pace continued into the second half. Shyanne Sellers and Benzan kicked off the third with a pair of threes, giving Maryland its largest lead of the game. But Michigan responded with a 9-2 run through the middle portion of the quarter.

Maryland chased the home team off of the three-point line after conceding 10 triples in the teams’ last meeting. At the 4:44 mark of the third, Michigan had hit just three threes.

However, after dealing with deep threats Caitlin Clark and Taylor Mikesell in its last two outings, Maryland struggled to adjust to the proficient inside game from the Wolverines.

Hillmon was unstoppable — she finished with 29 points on 10-of-15 shooting. Additionally, Michigan dominated on the boards, collecting 18 more rebounds than the Terps.
“She makes you work for the entire shot clock and she did all game,” Frese said. “That’s what an All-American is supposed to do.”


Hillmon converted on an and-one with 3:15 remaining in the third period to give Michigan a slim lead. Emily Kiser then punctuated a tremendous 10 minutes with another crucial and-one.

While Maryland’s defense had been its strong suit in recent matches, the offensive diversity from the home team had put it into a four-point hole after three quarters of action.

Reese picked up her fourth foul on another and-one opportunity from Hillmon after 1:30 in the fourth quarter. After Michigan committed most of the fouls in the second quarter, the Terps returned the favor down the stretch.

Reese was the main victim to the team’s foul issues in this one as she fouled out with 2:53 remaining. She struggled the last time she took the floor against Michigan and added onto her struggles tonight — Reese has shot a combined 4-for-20 over the two meetings.

Maryland gathered some momentum late to cut it to a five-point deficit with under a minute to play. But a blown layup by Owusu that could’ve cut the deficit to four highlighted a difficult afternoon for the Terps.

With the loss, Maryland falls behind Michigan in the Big Ten standings.

“As disappointing as it is, I think we can learn from this and everything that we’ve gone through this season in playing as competitive teams as we have and take those skills into the Big Ten tournament,” Chloe Bibby said.