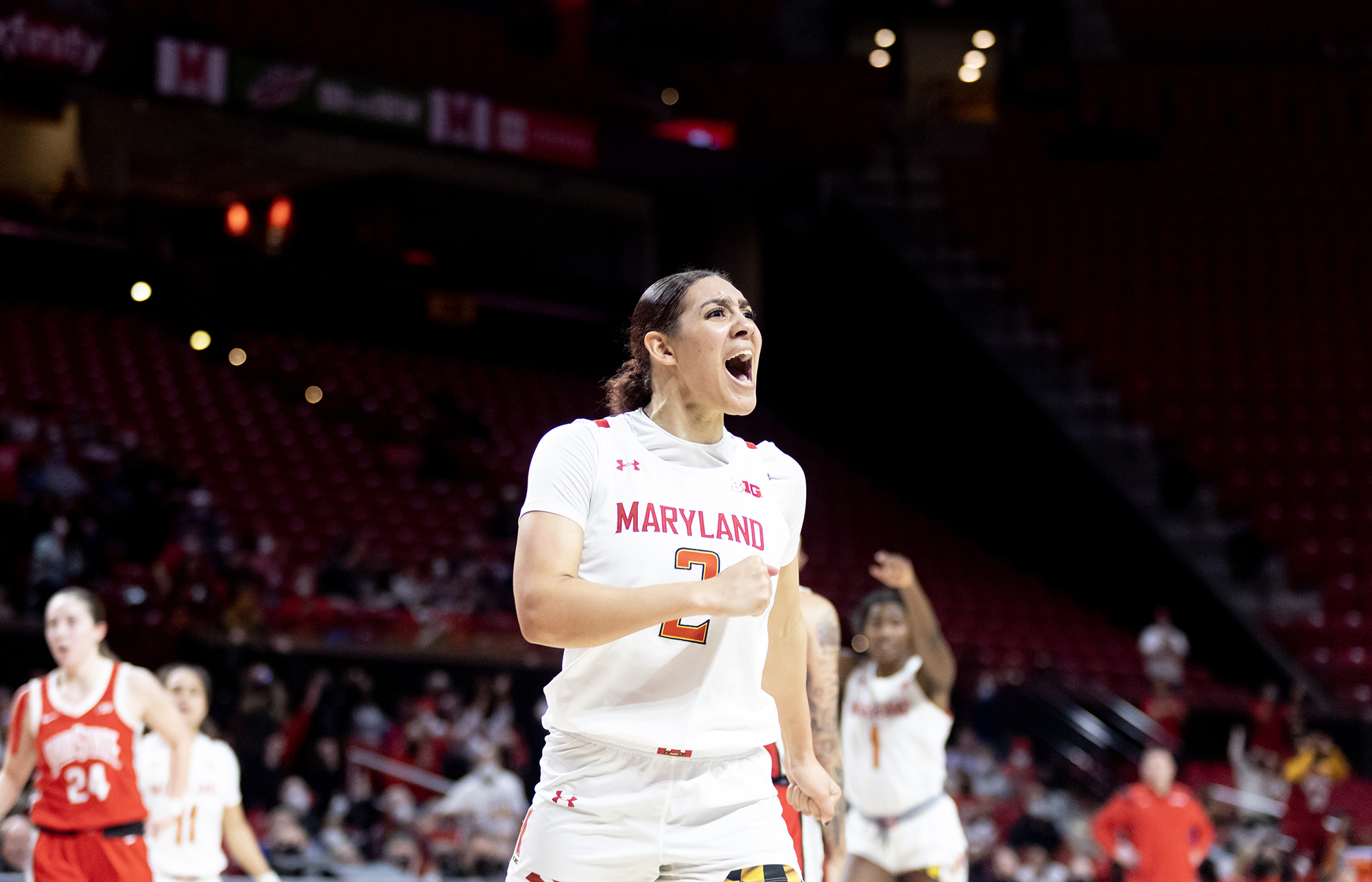 Mimi Collins stood defiantly in the foreground, fresh off scoring a left-handed layup through contact for an and-one. She turned and bellowed at the Xfinity Center crowd, overflowing with emotion after a key basket in the fourth quarter.

Angel Reese celebrated in the background, sprinting from her seat on the bench to the baseline. In the process, she ran into Keith Pough, the team’s Assistant Director of Basketball Performance, and sent the former fringe NFL linebacker careening into the baseline table.

“I don’t know if you guys saw, I knocked Keith down today,” Reese said. “So if I can knock Keith down, you guys know what’s going on inside.”

What went on inside was domination.

Maryland women’s basketball showcased the strength borne out of grueling training sessions with Pough along with its size, smothering Ohio State with length and physicality in a 77-72 home victory Friday night.

With two or three of Collins, Reese, and Chloe Bibby on the floor at all times against a smaller Ohio State squad, the Terps feasted in the crimson paint. Maryland outrebounded the Buckeyes by 14, outshot them from the free-throw line by 13, and outscored them in the paint by 14 points.

“This team is kind of starting to understand that rhythm, where it needs to go,” coach Brenda Frese said. “But again, for us to go up to the free throw line, 19 out of 21 free throws… those are the easy points we’ve got to be able to get.”

Collins finished with 12 points in just 19 minutes, six of them coming from a pair of and-ones. The first came late in the third quarter, when she corralled a Diamond Miller missed 3-pointer before turning and launching a push shot that spinned along the rim before dropping in.

Reese, who had also been tussling with her matchup to gain position for the rebound, stomped in glee before greeting her teammate with a hearty chest bump. The offensive rebound was one of 13 the Terps would grab, six of them coming from Reese.

The sophomore, who didn’t start the game because she was late to the team’s shootaround and only played 26 minutes, still led the team in points and rebounds. She scored 21 points and grabbed 15 rebounds for her 15th double-double of the year.

“Angel does what Angel does,” Frese said. “Getting to the free throw line, making free throws, getting on the glass for us, huge presence for us inside.”

After a first half where Maryland only shot five free-throws and turned the ball over 10 times, Frese implored her team to bring more energy.

The Terps answered Frese’s call with a 6-0 run to open the quarter.

Reese struck again on the next offensive possession, getting good post positioning before taking a hard dribble and finishing in the paint.

Later in the quarter, Reese was fouled, and a technical foul called on Ohio State coach Kevin McGuff along with a loose-ball foul against Diamond Miller gave the Terps six free throw attempts in just a minute-long span.

They made five of their six attempts, part of a 12-0 run that let Maryland leave the third quarter with a five point lead that it maintained until the final buzzer.

The win made eight in a row for Frese’s squad, one that faded into the background earlier in the season after multiple losses — including one to this Ohio State team.

But now the Terps are back in the foreground, whether they’re bullying their opponents in the paint or knocking coaches over on the sideline.

They’re also playing an impressively versatile brand of basketball, one that pairs sharpshooting and dynamic offense with a rugged group of rebounders that get extra possessions and high-percentage points that are anything but easy to get.

Now second in the Big Ten with two games to go, Maryland is playing its best stretch of basketball and still has a chance to clinch the regular season conference title with a pair of massive tournaments just weeks away.

“Whoever has to go against us, it’s just a scary sight,” Collins said. “We’re just peaking at the right time… we’re just rolling at this point.”