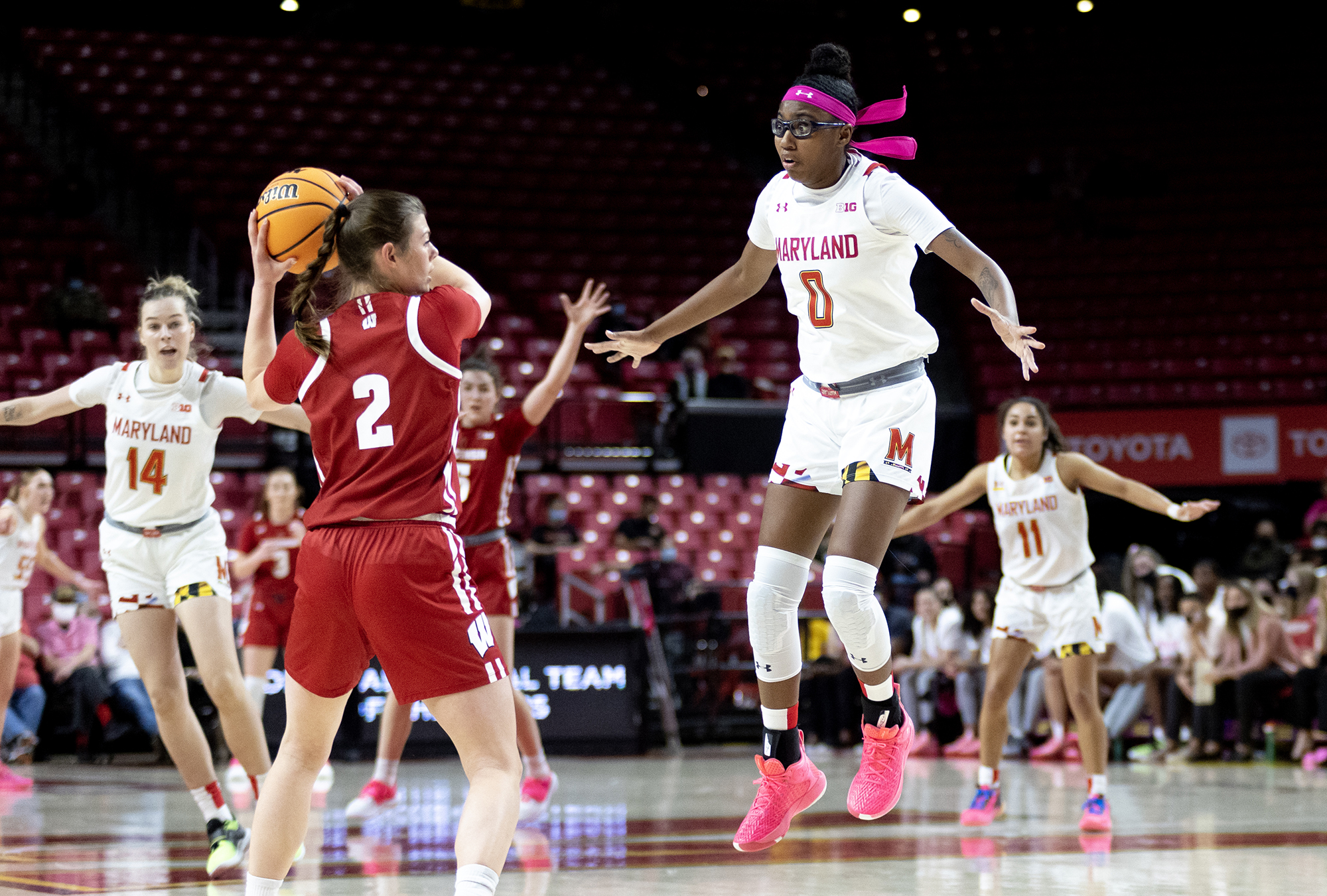 Shyanne Sellers started playing defense at the opposing free-throw line, guarding the inbounds pass before jogging backward and settling into her defensive stance at halfcourt.

Her matchup, Iowa’s Caitlin Clark, tried to abruptly change pace and drive forward, but the Maryland women’s basketball freshman slid there before her, absorbing Clark’s left forearm and shoulder and sliding backwards on the hardwood to draw a charge.

That play — on the first Terps defensive possession in Monday night’s road win — began a stellar defensive performance for Maryland, which married game plan and execution to force the National Player of the Year candidate into 10 turnovers.

“I mean our defense … holding them to 69 points, that’s huge with the number one scoring team in the country,” coach Brenda Frese said.

The Terps’ defense has vastly improved in their seven-game win streak as key tweaks and heightened engagement have helped them limit teams under 40 percent field-goal shooting in five of those games and another to 41 percent.

“I feel we have a group of athletes that are long and positionless on both ends of the floor, and so it’s a seamless transition on both ends to just be able to switch things,” assistant coach Kaitlynn Fratz told The Diamondback. “It makes it easier from a transition standpoint where you can matchup and guard anybody and do the same in the halfcourt.”

Fratz, who focuses heavily on the defense and was one of the primary reasons Maryland adopted its switch-heavy scheme in 2019, said the Terps focused on keeping either Sellers or Diamond Miller on Clark throughout the game.

They picked her up early and consciously devoted more resources to limiting Iowa’s transition attack. Because Clark likes to make plays with the ball in her hand, Maryland found her quickly from the tipoff.

“There’s not a lot of switching involved because she’s making plays fast,” Fratz said. “And so that’s why you were able to see Diamond and [Sellers] being able to stay on her longer because there wasn’t a lot of offense being run, it was just Clark with the ball.”

Clark scored 19 points but went 9-of-19 from the floor and shot a dismal 3-of-13 from three-point range.

While they wanted to avoid the switch and keep the original matchups on the night, the Terps’ defense has embraced that as their game plan. The Terps have simplified their rules for switching screens, allowing them to play hard and avoid thinking, something that plagued them during their early season struggles.

“When you don’t have energy and effort, you’re left to think. And thinking makes you a step slow,” Fratz said. “And when you’re reactive to everything that teams are doing, players are going to get to their spots because the offense needs you to react. And if you’re late to react, they already have their shot off.”

Fratz said the disadvantageous matchups that stem from that strategy only result in an average of 6-to-8 points per game, points Maryland is willing to give up if it means it can play fast.

That’s also helped by the Terps’ personnel. Sellers, Miller, Angel Reese, Ashley Owusu, Chloe Bibby and Mimi Collins are all at or above six feet tall, and their similar sizes give them the versatility to trade off defensive assignments.

Katie Benzan — who’s 5-foot-6 — is the only player who doesn’t meet that criteria. But Maryland has ways to get around that. When the guard fronts larger players in the post, help comes from her teammates or she uses her lack of size to her advantage to come over and strip the ball from post players.

“Katie can prove that size doesn’t matter because she gives it her all,” Fratz said.

The Terps are also being intentional about switching aggressively. They’re switching with purpose, with the aim to deny post passes, steal the ball, prevent swings from one side of the floor to the other, trying to force turnovers and turn that aggressiveness into turnovers that can feed their offense.

The redoubled defensive effort is visible in the Maryland film sessions, where Fratz sees a greater level of involvement than before. It started Jan. 21, when the team reviewed film after its Ohio State loss. Since then, the Terps have been more purposeful in those meetings, with players taking the ownership.

“I just remember them really not wanting to be embarrassed again,” Fratz said.

That collective team mentality carries over onto the court.

With just seconds left in the first quarter against the Hawkeyes, Reese lunged for a steal and fouled Clark, who went to the line and made both free throws for the first points of her night.

Reese immediately apologized to her teammates in the next huddle for giving up the two points. She didn’t want to let the other Terps down — even if it was just two points — because of the collective responsibility they feels for their individual jobs and the way they fit together within the team.

“The ownership for her was great … it was mature,” Fratz said. “I think that’s one of the things it’s like you can see us growing up day by day, and it is not just this one film session, this one practice, it’s little moments like that that have added up and are super positive across the board.”

Next up on the schedule is the last team to beat Maryland, the Buckeyes. In the game, arguably the lowest point of the Terps’ season, they gave up a season-high 95 points. Thirty-three of those came from former Maryland guard Taylor Mikesell, who transferred from College Park two years ago.

The Terps are ready for another crack at their old teammate.

“They’re pretty pumped,” Fratz said about the rematch. “You don’t ever want to make it about one player and ultimately it is about us, I think we’re the only people that can beat ourselves right now. I don’t think that’s going to happen. But we’re excited. Home revenge is the best kind of revenge, especially right now where we’re playing our best basketball, I think, of the year.”