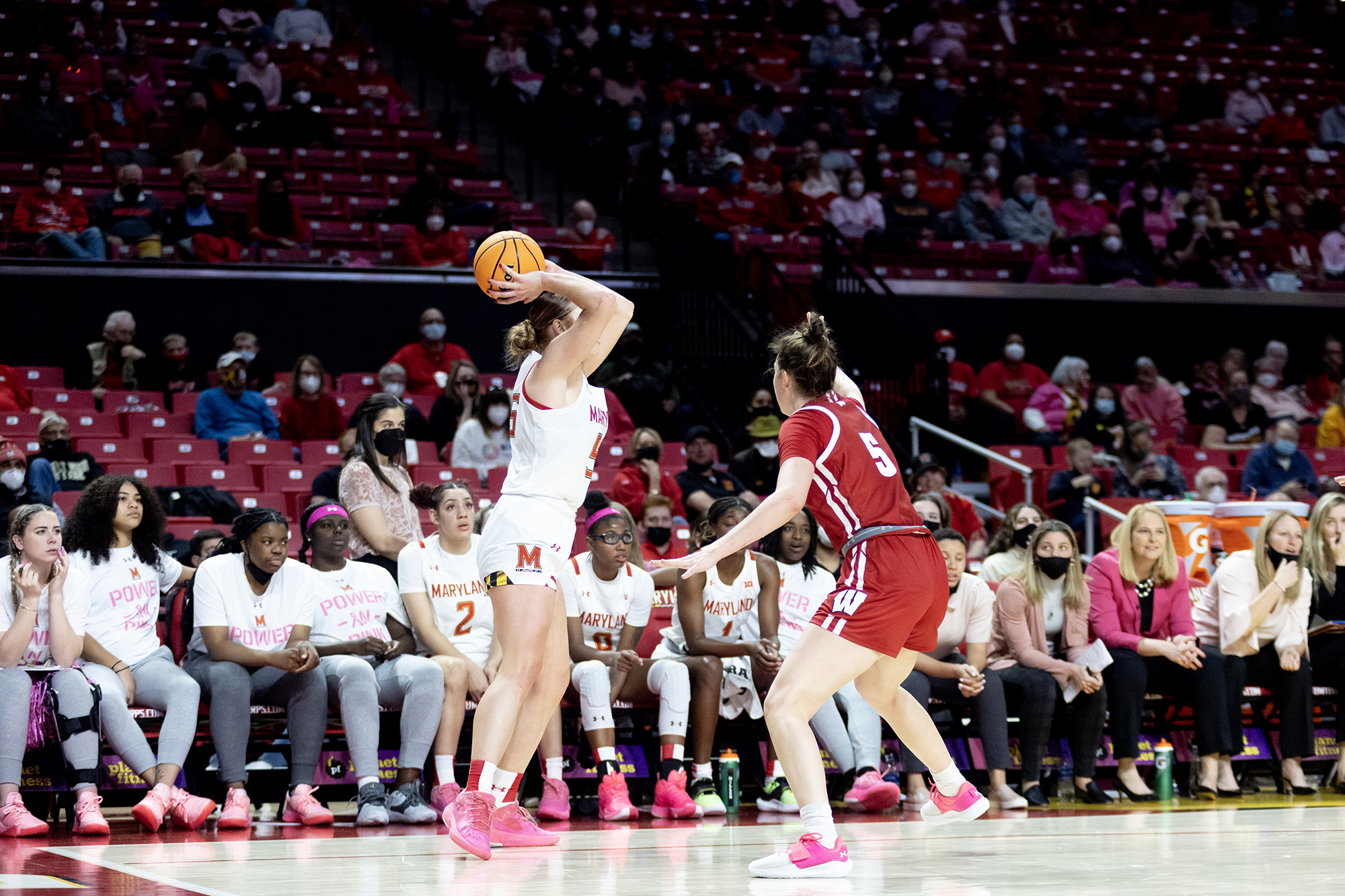 “That crowd was loud,” Frese said.

While it took some time to awaken the crowd, the Hawkeyes battled back from a 20-point deficit to ignite the arena.

The shift took place in the third quarter as Caitlin Clark and company began to find their rhythm. A three by Diamond Miller with eight seconds left in the quarter curtailed a 10-2 closing run for Iowa, but Clark’s heave from just past half court nearly blew the roof off the place.

With the pendulum having swung into Iowa’s corner, Maryland had to lock in the rest of the way to escape with a huge top-25 road victory. Luckily for the Terps, they are no stranger to adversity.

“She’s so good it didn’t surprise me,” Frese said. “But most importantly was just calming us down going into [the fourth] knowing that was a big play for them, but we were going to continue to make big plays.”

Throughout the season, the Terps have dealt with losses, injuries and COVID-19. In Monday’s case, it was foul trouble.

Already short-handed due to Ashley Owusu’s sprained ankle, fouls played a key role in Iowa’s comeback. Angel Reese sat out for a majority of the run, while Katie Benzan, Shyanne Sellers and Mimi Collins entered halftime with two fouls apiece.

Benzan ended up fouling out of the contest. Additionally, Diamond Miller, who logged 40 minutes in the crucial win, collected four fouls of her own.

This made the Terps play more conservative defense in the second half, giving way to Clark’s surge. With nine third-quarter points, Clark had surpassed her first half output — Maryland’s 11-point lead continued to dwindle.

Despite letting the Hawkeyes pull within five points with 6:47 to go, the Terps scraped together key defensive stops and timely buckets to prevail in the hostile environment.

“I thought tonight as we’ve grown in this stretch, we’ve just really started trusting each other and just continuing to keep making plays for each other,” Frese said.

[With Iowa on the horizon, Maryland women’s basketball is fixed on slowing Caitlin Clark]

The noise and adrenaline from Iowa’s fans had been absorbed, playing right into Maryland’s favor.

The road the Terps have built for themselves — a gauntlet of a nonconference schedule, “February Frenzy ” and the ever-so-difficult Big Ten conference — has allowed them to hit their stride at the perfect time.

“It’s really great that it’s coming together within the games, and man, it gives us that energy,” Bibby said. “We’re just so connected. We obviously have that offensive chemistry, so to get it on the defense, it’s just so much fun to play.”

There’s still work to be done, but how the team has handled the latest set of obstacles thrown in its direction shows just how dangerous the battle-tested Terps can be come March.

“We’re all excited for the battles and the good games that are coming our way,” Benzan said. “We all believe each one we can win and we can succeed.”

By securing its second top-25 win of the season, Maryland has jumped into the top-16 seeds in ESPN’s latest Bracketology. This would ensure, at most, two home postseason matches.