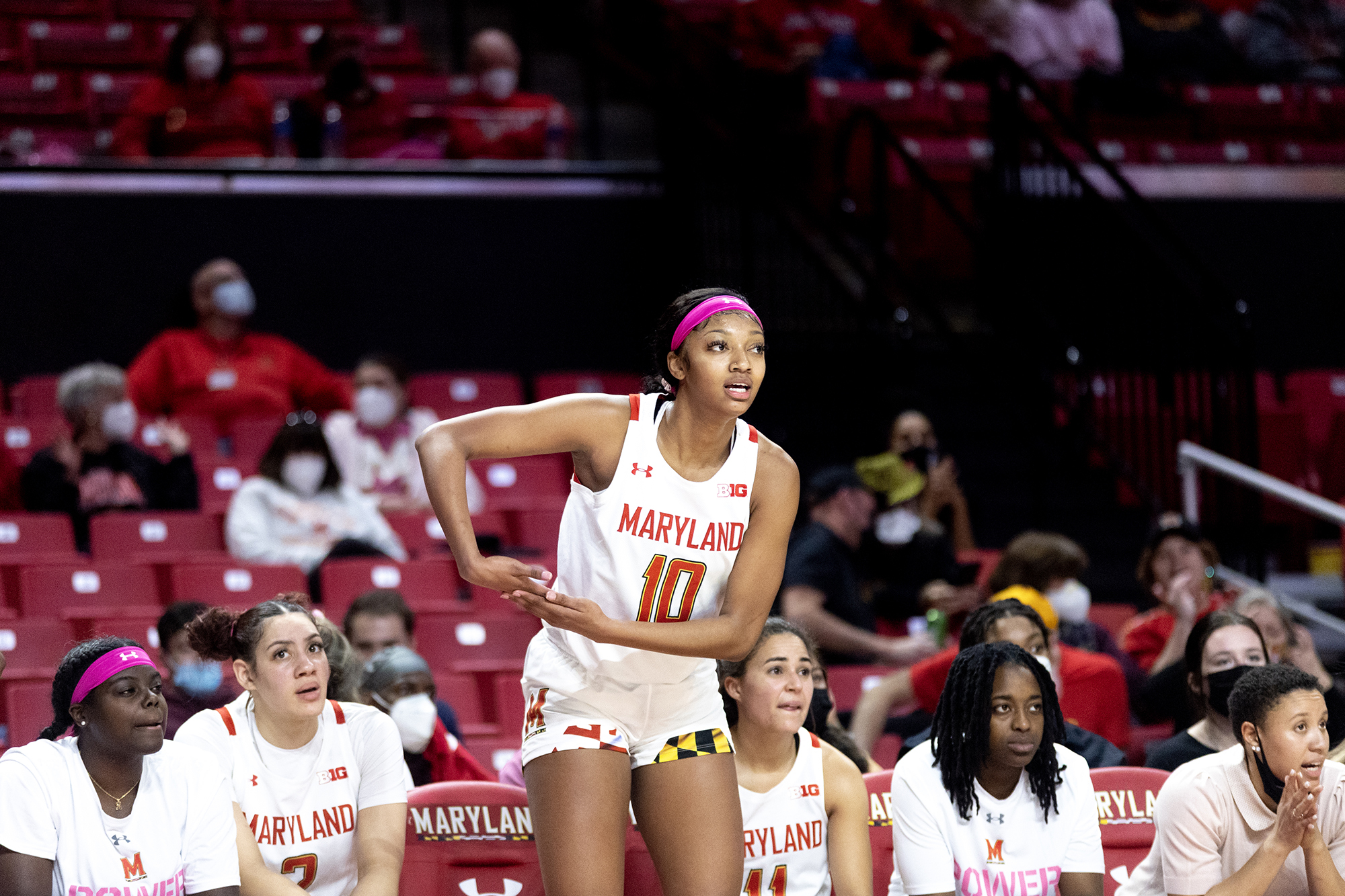 Angel Reese rocks the baby on the bench during Maryland women's basketball's 70-43 win over Wisconsin on Wednesday, Feb. 9 (Julia Nikhinson/ The Diamondback)

Maryland women’s basketball entered the first of four top-25 matchups to end its regular season with one focus in mind: neutralizing Caitlin Clark.

The national player of the year candidate was the main emphasis of the defensive game plan. While the Terps limited Clark to just eight points in the first half, they fell apart at the seams down the stretch, watching its once 20-point lead shrink down to five points.

A turnover from Addison O’Grady at the 6:06 mark would be the beginning of the end of Maryland’s late game collapse, however.

Following the errant pass by O’Grady, Angel Reese and Katie Benzan scored five huge points. O’Grady broke the quick run with a second-chance layup, but Chloe Bibby silenced the Carver-Hawkeye Arena with an emphatic three, set up by an extra swing pass from Benzan.

The ensuing possession from Iowa saw Clark commit her ninth turnover of the evening. Bibby telegraphed the pass perfectly and coasted to a wide open layup, bookending a crucial 10-2 run to ultimately seal a Maryland victory, 81-69.

“When you look at our schedule, it’s prepared us now to be resilient,” coach Brenda Frese said. “You knew they were going to make a run … We were able to withstand that and pull it out for a really nice win on the road.”

[With Iowa on the horizon, Maryland women’s basketball is fixed on slowing Caitlin Clark]

Iowa got off to a fast start, but it wasn’t Clark doing the damage. Gabbie Marshall and Monika Czinano supplied nine of the first 11 points for the home team, while Clark missed her five attempts of the quarter. She finished the first with two points — both from the free throw line.

However, it didn’t take long for Maryland to get back into the game. After falling behind 11-4, a 20-8 run to end the quarter was spearheaded by a balanced offensive approach and early pressure on Clark.

Toward the end of the first, Diamond Miller picked the pocket of Clark on a drive from the elbow, kicking off a fast break that would end with a Mimi Collins finish at the rim. Albeit a small sample size, the play by Miller encapsulated a terrific opening ten minutes for the Terps.

“I think our team gets really hype playing against top players, top competitors, and we like to shut things down,” Reese said. “We’re happy with what we’re doing and we’re moving the needle.”

From the first whistle of the second quarter, Angel Reese began to take over. The standout sophomore scored the first six points of the frame for Maryland, getting to the rack with authority.

The highlight of her mini-run was a dish from Chloe Bibby out of the post. At the 8:43 mark, with her back to the basket, Bibby found a cutting Reese for the easy finish, allowing the Terps to carry over their momentum.

Reese continued her productive quarter, tallying 10 points. This pushed her total to a game-high 18 points as she asserted her dominance in the opening half.

The Terps entered the half with a commanding 48-33 advantage. But the dangerous Hawkeyes still had another half left to awaken against an already shorthanded opponent seeing three of its rotation players commit two fouls.

Taisiya Kozlova saw some extended minutes as a result, playing some masterful defense at times on Clark. But the nation’s leading scorer was able to hint at a second half explosion by scoring four of her eight first half points in the closing two minutes.

A brief run from Iowa — which coincided with Reese picking up her third foul — segued into a massive 15-4 stretch to start the third. The tides had turned, bringing the Hawkeyes within single digits after trailing by as much as 20 just prior to their run.

As Reese continued to occupy a spot on the bench, Maryland’s offense grew cold. Five quick points by the Terps in the final minutes seemed to reestablish their pace, but a midcourt heave by Clark banked in to make it a 66-55 game.

“There was a lot of adversity in this game and I thought we didn’t flinch,” Frese said. “When they made runs, when we were in some foul trouble, [we] stayed very even keel.”

After scoring eight points in the entire first half, Clark tallied nine points in a crucial third quarter for Iowa. The pendulum continued to swing into Iowa’s corner as the home team cut its deficit to five — the lowest it had been since the middle of the second quarter.

Rather than Clark continuing her hot shooting, the supporting cast were the main beneficiaries of her playmaking. Marshall’s lay-in at the 6:47 mark rewarded Clark with her sixth assist, but that would be the peak of Iowa’s late-game surge.