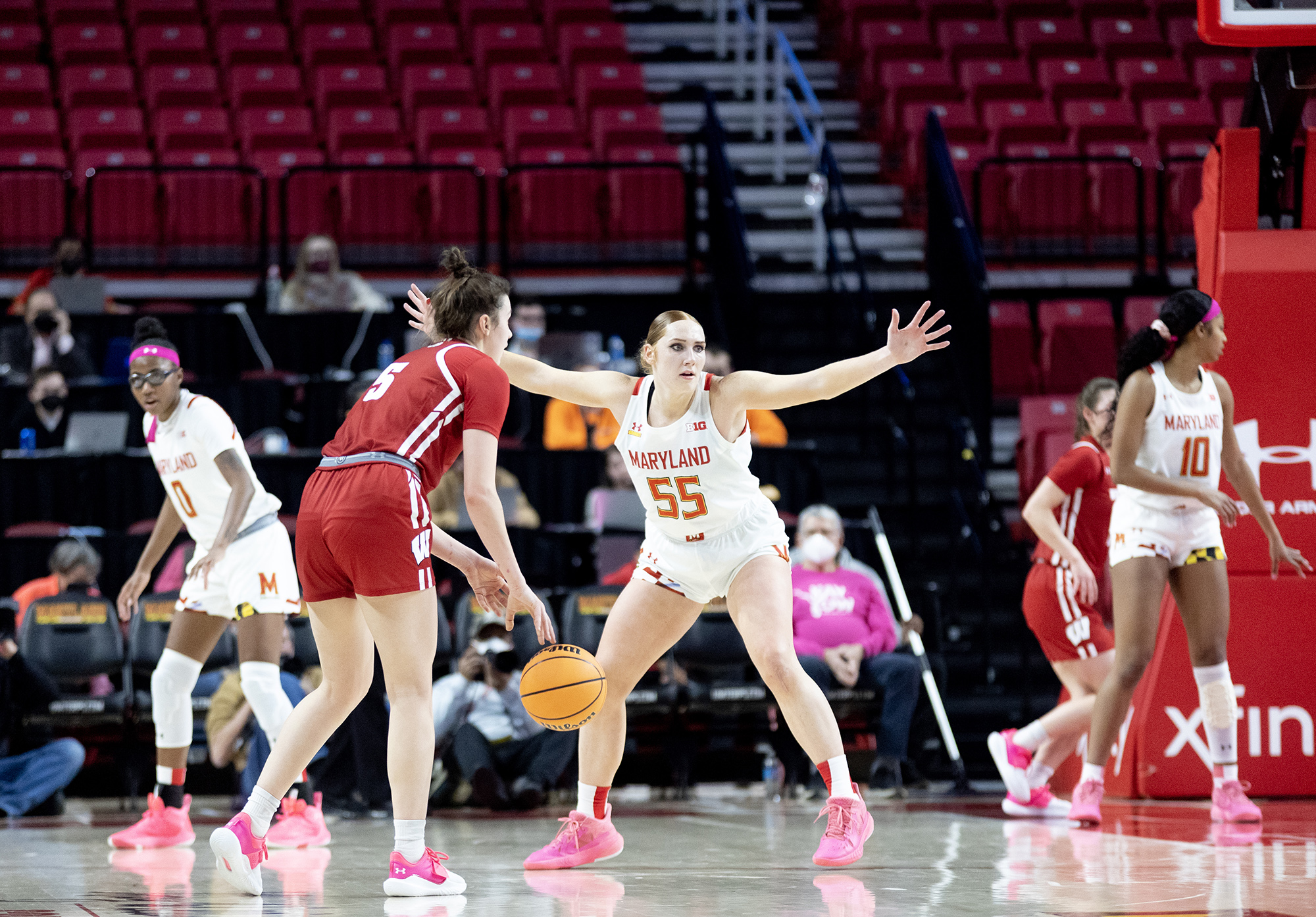 Chloe Bibby gets into her defensive stance during Maryland women's basketball's 70-43 win over Wisconsin on Wednesday, Feb. 9, 2022. (Julia Nikhinson/The Diamondback)

Just 30 seconds into the game, Chloe Bibby sent a Wisconsin player down to the hardwood.

Badgers guard Krystyna Ellew tried to thread a bounce pass past Bibby to fellow Wisconsin player Brooke Schramek, but the Maryland forward stuck her hand in the way to deflect the ball.

With the loose ball on the floor, Bibby sealed off Schramek, eventually knocking her down with a subtle push that gave her the opportunity to secure the ball and start an offensive possession. On the other end of the floor, Bibby corralled an offensive rebound and converted a bucket to cap off an impressive sequence.

That physical play was a hallmark of Maryland women’s basketball’s effort in Wednesday night’s dominant 70-43 home win over Wisconsin.

The Terps held their opponent to a season low in points and limited the Badgers to just 34 percent shooting from the field. They also forced 26 turnovers and outrebounded Wisconsin by 12.

“We got a little overwhelmed tonight I think with the pressure,” Wisconsin head coach Marisa Moseley said.

Every Terp who played registered at least one steal, including Emma Chardon, who did so despite only playing seven minutes. Hers came late in the fourth quarter when she denied a post entry feed for her second steal of the season.

“Woohoo!” Bibby said when she heard the former stat. “That’s great, we love that.”

Bibby led the team with five steals while Shyanne Sellers added four more. The freshman played with active hands and swiped the ball away from a driving Julie Pospisilova in the first quarter.

Pospisilova, Wisconsin’s leading scorer, finished the day with more turnovers than made field goals, and shot just 33 percent from the field.

The Terps’ defense disrupted her all day to force her into a variety of turnovers, including one early in the game where her pass from one corner to the other clanged off the underside of the rim.

“Twenty six turnovers,” Moseley said. “You’re not going to win a lot of basketball games like that.”

Sellers’ performance has her tied for the team lead in steals with 41 along with Angel Reese. Reese only had one steal against Wisconsin, but added to her team-leading 25 blocks with three on the Badgers.

It was a Reese block that landed in the hands of Katie Benzan and ultimately ended with a Chloe Bibby and-one early in the first quarter, a sign of what the Badgers could expect for the next three frames.

“Definitely love where chemistry has been built,” coach Brenda Frese said. “I think we’ve improved obviously defensively in some areas that we really needed to improve on, I think our rebounding has definitely cleaned up as well.”

Sellers and Reese, two of the youngest Terps, also grabbed multiple rebounds — part of an effort on the glass that ended strong defensive possessions and prolonged offensive opportunities. The Terps scored 19 second-chance points.

Playing well defensively against Wisconsin, a team that’s only averaging slightly above 57 points per contest, isn’t something to hang Xfinity Center banners over.

However, stifling a team like the Terps did is nothing to sneer at, and it’s another strong performance for a team whose defense has struggled mightily at points earlier this season.

The lowest of those points was after back-to-back losses against Michigan and Ohio State, when Maryland gave up 164 combined points.

The Terps get a chance to show that their defensive improvements aren’t just because of their opponents. They’ll close the season with a game each against the Wolverines and Buckeyes and battles with both No. 25 Iowa and No. 7 Indiana.

“We’ve been able to use this stretch … to build confidence,” Frese said. “It’s been a good stretch for us to now be prepared as we get ready to go on the road and face Iowa.”