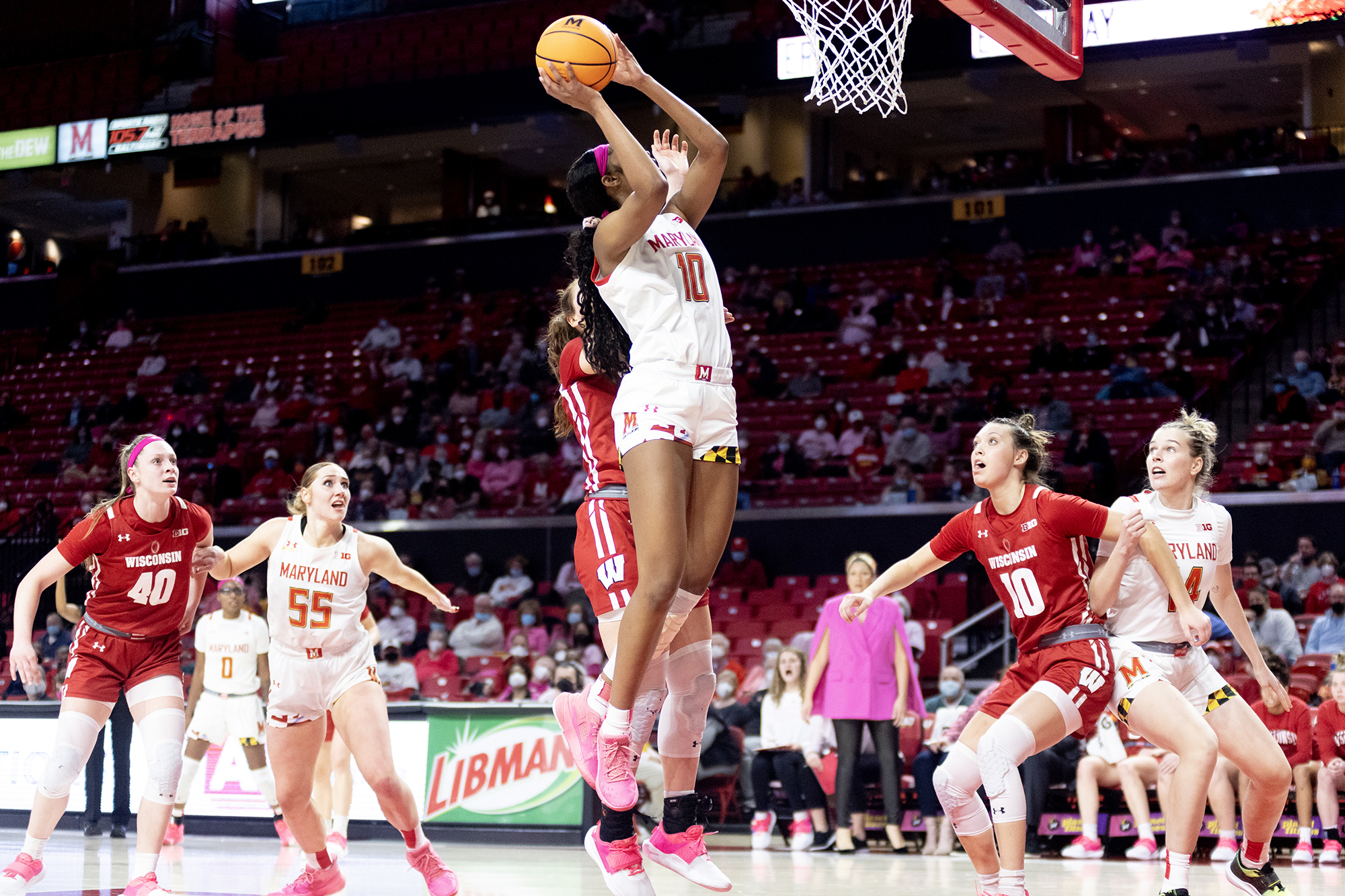 Angel Reese goes up for a layup during Maryland women's basketball's 70-43 win over Wisconsin on Feb. 9, 2022. (Julia Nikhinson/The Diamondback)

Maryland women’s basketball went down extremely early against Wisconsin — the Terps were down a point before the game clock even started. The light behind the backboard malfunctioned, giving the visiting Badgers a technical free throw which they made to take a 1-0 lead.

It was the only lead they had all night.

Angel Reese clocked the first real points of the game with a post bucket, sealing off her defender before ducking in for a quick layup.

The Terps went on multiple 11-0 runs in the first half and defeated the Badgers, 70-43, in a Wednesday evening home matchup.

“We’ve hit adversity all year, that was just another little nugget that we hit,” Reese said. “We played Maryland basketball and did what we had to do.”

Playing without Ashley Owusu for the second game in a row due to a right ankle sprain, the Terps got balanced scoring across the lineup. Chloe Bibby started strong, going 3-of-4 from the field in the first quarter for eight points. Her three-pointer early in the second quarter gave her more points, 11, than the entire Badgers squad, 10.

Bibby finished with 16 points, one of four Maryland players in double figures. Reese led the team with 19 and added nine rebounds. She regularly grabbed Maryland misses and went back up for layups, including on one play where she snatched the rebound and scored all in one jump.

She also flashed her offensive footwork, driving to the rim before ripping a controlled spin move to score at the paint.

Reese also blocked three shots, including a Wisconsin three-point attempt. It was part of a strong defensive effort for the Terps, who limited the Badgers to just 34 percent from the field and forced 26 turnovers.

“When we’re using our length, our size, our athleticism and scrambling, we’re really hard on the defensive end,” coach Brenda Frese said. “I like our effort and our energy… how hard it is when we’re contesting every single shot that goes up.”

Bibby led the way for Maryland in takeaways with five steals but was followed closely by Shyanne Sellers who snagged four for herself. Every Terp who entered the game logged at least one steal.

“We love that,” Bibby said. “We’ve been working on our defense all year and so it’s really just great to see that we’re getting those rotations… because it’s something that we’re consistently working on every day.”

The Terps scored 27 points off those Badger miscues. Frese’s squad was prolific from the three-point range, making 8-of-19 looks.

Late in the first half, Katie Benzan drove down the baseline before flinging a pass through a seam in the defense to Sellers, who knocked down a three-pointer.

A quarter later, it was Benzan who relocated and then received a pass from Diamond Miller to score from deep. The starting guard duo of Benzan and Sellers combined for five three-pointers and 21 points.

“You see that Shy is just continuing to build a ton of confidence on both ends of the floor,” Frese said. “The length, the athleticism, the energy she plays at, I love the confidence she’s playing at on both ends.”

This matchup was the last tune-up for the Terps ahead of a daunting schedule to close the regular season. Maryland will look to extend its impressive six-game win streak against four ranked Big Ten teams, three of which have beaten the Terps already this season: Ohio State, Indiana and Michigan.

“We get to play the other three that we kind of fumbled a little bit, so we’re excited to be able to come up against that,” Bibby said. “But I think since then we’ve improved. We’ve really kind of regathered together and we’re stronger now. I feel confident about it.”