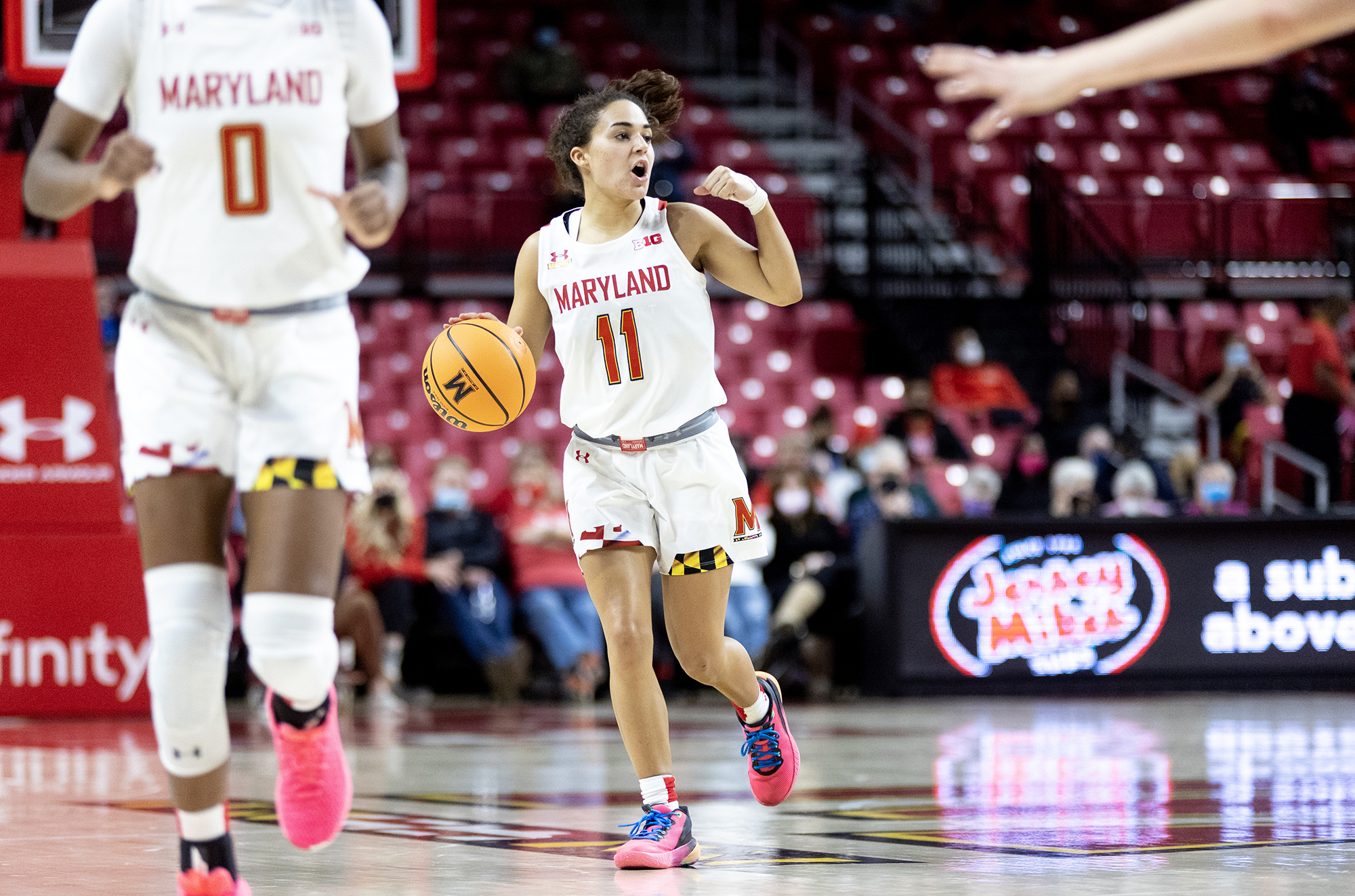 Katie Benzan dribbles the ball and talks to her teammates during Maryland women's basketball's 70-43 win over Wisconsin on Feb. 9, 2022. (Julia Nikhinson/The Diamondback)

Opening the season as the No. 4 team in the country, Maryland women’s basketball rattled off six consecutive wins — the last of which was a thrilling, 79-76, victory over then-No. 6 Baylor.

Although the Terps carried heavy momentum into their weekend trip to the Bahamas four days later, they fell flat. Coach Brenda Frese’s squad lost to top-10 teams NC State and Stanford by 18 points each. From there, Maryland continued to beat the teams they were supposed to beat, yet couldn’t get it done against ranked opponents.

Since its shorthanded win over the Bears, Maryland has lost all four of its ranked matchups. Following consecutive losses to Michigan and Ohio State in the middle of Jan., the Terps fell to as low as No. 17 in the AP Poll.

But since those two defeats, Maryland has once again found its rhythm — albeit against unranked opponents. Its most recent win over Wisconsin, 70-43, marked its sixth straight and the least amount of points it’s allowed on the season.

“I think we’re coming into everything that we’ve been working on all season,” Chloe Bibby said. “I think our defense is really coming together and that’s making our offense glow, so we’re really excited for these next four games coming up.”

The Terps are back in the same position they were in when they last won this many games in a row — on the doorstep of an essential stretch that will work to validate and secure the team’s potential in March.

Road matchups against No. 25 Iowa and No. 4 Michigan, and home splits against No. 21 Ohio State and No. 7 Indiana await. But much like the last time it was preparing for a slate of multiple ranked opponents, Maryland will be limping in.

Katie Benzan and Faith Masonius were out of the Baylor game due to COVID-19 protocols. Diamond Miller made her second appearance of the season against the Bears, only to reaggravate her knee and miss the next month.

Now, Masonius has been ruled out for the season with a torn ACL and Ashley Owusu is day-to-day with an ankle sprain.

With so much turmoil this season, it’s no surprise that Frese’s team has had its share of lowlights. But all of the obstacles Maryland has faced and continues to face has molded it into a fierce competitor.

“We’ve been able to use this stretch to build confidence,” Frese said. “With some of the adversity that we’ve had being able to kind of rebuild some of those rotations and our lineups.”

That confidence is across the board. From individual performances to collaborative defensive clinics, it is time for Maryland to stake its claim as a top national title contender once again.

“We have four great, special seniors and being able to have those girls and doing everything for them right now, you don’t get a good group like this pretty often,” Angel Reese said. “Being able to have this group two years in a row [has been] really, really fun.”

While a trip to the big dance is all but guaranteed, the Terps can salvage their seeding over the next few weeks. On the flip side, Maryland could slip further down the seed line after having already lost to three of its final four opponents.

It starts with Caitlin Clark and Iowa on Feb. 14. An offense as potent as the Hawkeyes’ presents a real test for Maryland’s defense — something unforeseen since hitting its stride over the course of this win streak.

But with the confidence the Terps are playing with on both sides of the ball, injuries and all, they should be a tough out moving forward, even if the elusive seventh straight victory is denied once again.

“We get to play the other three that we kind of fumbled a little bit, so we’re excited to be able to come up against that,” Bibby said. “I think since then we’ve improved … we’re stronger now and I feel confident about it.”