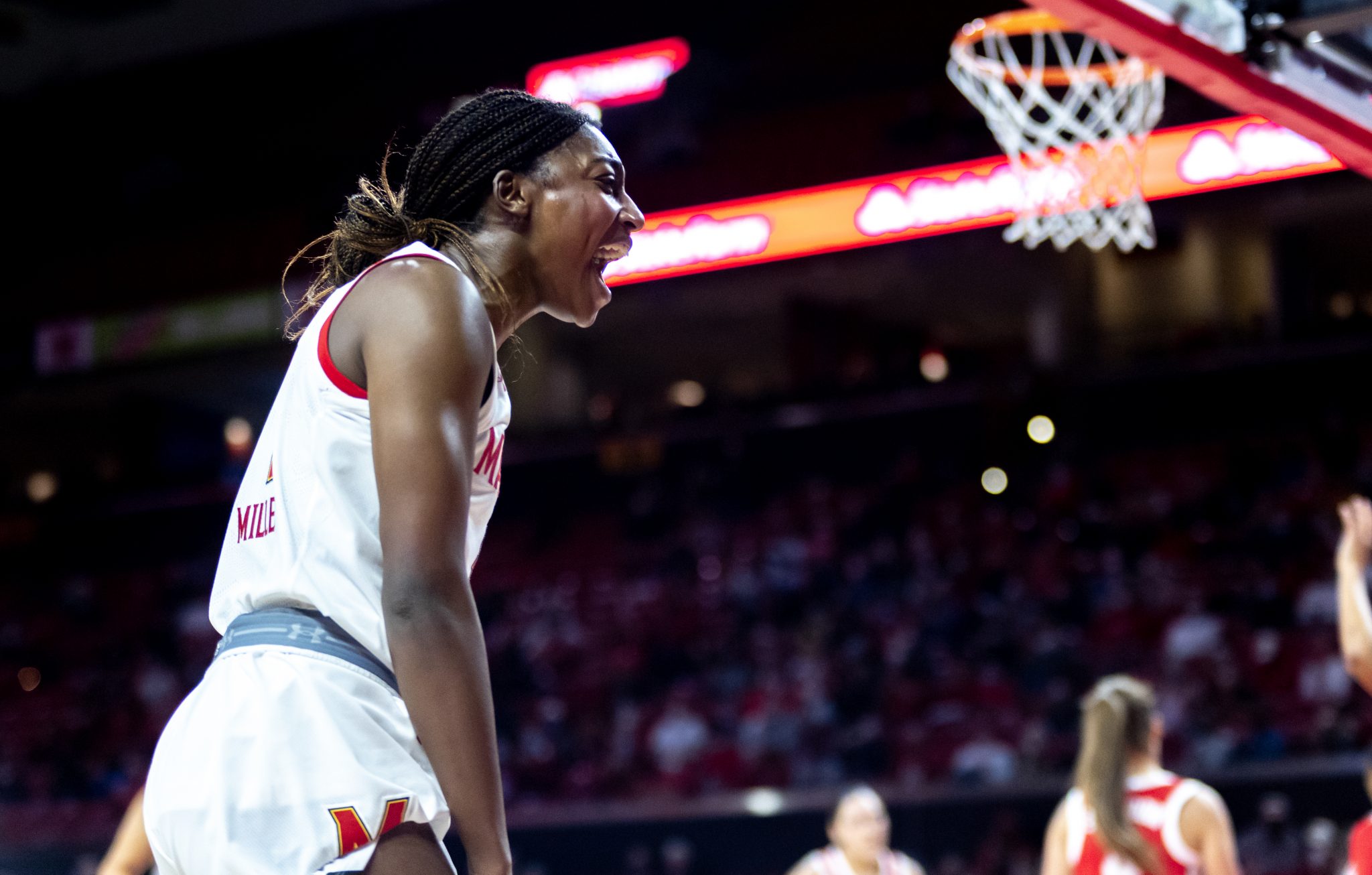 Trailing 50-47 in a rubber match against No. 18 Ohio State, No. 13 Maryland women’s basketball upped its intensity with phenomenal effort on the glass.

A missed three-pointer from Diamond Miller ricocheted high off of the back iron at the 3:51 mark. After spending an eternity in the air, Mimi Collins patrolled the paint for the offensive board.

The junior forward boxed out her matchup with ease, corralling the loose ball and putting it up through contact for the emphatic and-one. Maryland had taken its first lead since the first quarter off of Collins’s putback and it set in stone a crucial stretch for the Terps.

A 12-0 run — aided by a technical foul from coach Kevin McGuff — ensued, allowing the Terps to pick apart the Buckeyes in the interior. Maryland finished plus-14 in the rebounding department, a paramount figure in its second half surge.

The last meeting between the two Big Ten foes came at a low point in the Terps’ season, but Maryland exacted its revenge in a major way, securing its eight straight victory, 77-72.

“Just so proud of how this team continues to respond to adversity,” coach Brenda Frese said. “The response out of the locker room was terrific. We decided to go to a triangle and two, box and one, kind of really mix it up defensively to make them have to work.”

Following its 95-89 loss to Ohio State, Frese’s squad emerged from the ashes with authority, rattling off seven straight victories. A chance at retaliation came with some early drama, however, as Angel Reese didn’t check in until the 4:22 mark due to her late arrival to shootaround, per a team spokesperson.

Ohio State pounced on the Reese-less Terps early, coming out in a suffocating full court press. It sped Maryland up even more so than usual, leading to six turnovers in the opening quarter.

Despite holding its own until Reese checked in, the Terps yielded eight points to their three as the team meandered to a seven-point deficit after 10 minutes of action.

Mikesell was a thorn in the Terps’ side in the last meeting, and she once again gave Maryland loads of trouble. After Chloe Bibby cut the deficit to eight at the midway point of the quarter, the former Terp drilled a contested three over Katie Benzan, silencing the rowdy Xfinity Center.

She finished the first half with a game-high 18 points.

Miller cut the Buckeye lead to five on the penultimate possession with a beautiful step-through in the paint, but it was Ohio State’s game to lose through 20 minutes of action.

The pressure, along with the Buckeyes’ efficient shooting numbers, kept Maryland at bay. Entering halftime, the Terps trailed 39-34, with Ohio State exerting a tad more intensity than its Big Ten counterparts.

“We played with so much energy for the first half in terms of our pressure,” McGuff said. “We played a little harder and kind of in-sync with each other.”

With each team defending a lengthy win streak, the stage was set for an enticing second-half battle.

Maryland set the tone from the jump, with Miller intercepting the opening inbound pass by Braxtin Miller and finishing at the rim. Reese then delivered four straight points, giving the Terps their first lead since the opening quarter.

Threes from Mikesell and Braxtin Miller recaptured the momentum for Ohio State, but it was temporary.

At the 3:46 mark — with Maryland leading by one thanks to two free throws from Reese — Collins corralled a missed three by Diamond Miller to convert the and-one opportunity.

As Collins gave the Terps a four-point lead, the wheels began to fall off for the Buckeyes. McGuff picked up a technical following a shooting foul on Reese. Reese and Benzan then got two free throws apiece, knocking down all four chances to take a 58-50 lead.

“We took some unfortunate risks,” McGuff said of his team’s performance down the stretch. “We got real bogged down at the end of the first half even. Our offense just kind of slowed down.”

Maryland finished the quarter plus-10 in points thanks to a crucial 12-0 run. While Mikesell was still persistent with 23 points on 10-of-13 shooting, the all-around effort by the Terps had set the tone for the home stretch.

The fourth quarter continued to trend in Maryland’s direction. As the lead continued to grow, Collins converted on another game-altering and-one with 7:32 left to play. She finished under heavy contact with her left hand, capping off an 8-3 run to start the quarter.

With the lead reaching double digits, Mikesell did her best to help the Buckeyes storm back. But as good as she was in her return to College Park, Reese was just as dominant.

“I was just trying to get my hype, get my team into it and keep our energy up,” Reese said. “Our defense is something that we’ve been working on and we’ve been getting better at.”

The sophomore finished with 21 points and 15 rebounds, including a 9-for-10 showing from the free-throw line.

It was a second consecutive gritty victory for the Terps as they look as? confident as ever heading into another chance at revenge against No. 9 Michigan on Sunday.