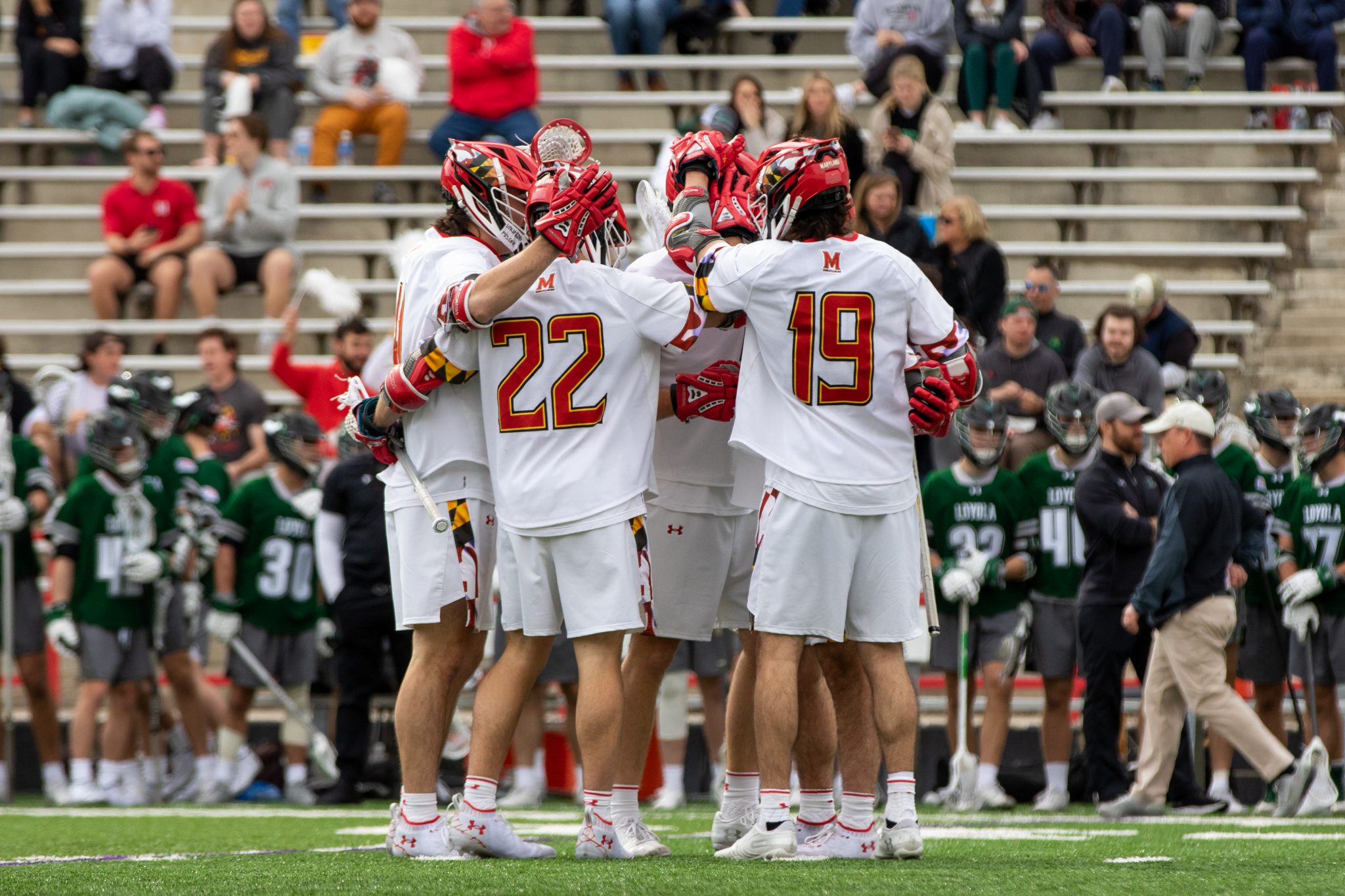 Maryland men's lacrosse huddles together during its 20-8 win over Loyola on Saturday, Feb. 12 (Cam Andrews/The Diamondback)

Each time Maryland took a big lead, Syracuse fought its way back.

Despite holding a lead as high as five at one point in the game, the Orange always had answers. Heading into the fourth quarter, the Terps only held a slim 9-8 advantage.

Just 15 seconds into the final quarter, Daniel Maltz found Logan Wisnaukas, and the former Syracuse player ripped his fourth goal of the day just under the crossbar to restore Maryland’s cushion.

Two goals from Jonathan Donville and a goal from Maltz would extend Maryland lead late, and the Terps’ defense held on as Maryland remained undefeated in a 14-10 win over No. 9 Syracuse.

The victory was the Terps’ second straight win over a top-ten team, after dominating Loyola 20-8 last week.

“It was awesome to get the team win. That was an awesome atmosphere out there,” Wisnauskas said. “Our scout guys gave us a really good look all week and it just all came together.”

After Maryland had two goals chalked off for a Syracuse push and a crease violation, the Terps finally took the lead through Anthony DeMaio.

Wisnauskas added another about three minutes later, and goalkeeper Logan McNaney’s four saves helped shut out Syracuse through the first quarter as Maryland held a 4-0 lead after 15 minutes.

[Maryland men’s lacrosse faces first road challenge of the season in No. 9 Syracuse]

DeMaio scored his second goal to open the second quarter to make it 5-0 before Syracuse began to gain its own momentum. The Orange scored twice with two low shots and won three straight faceoffs to make it 5-2.

Goals from Jonathan Donville and Roman Puglise sandwiched a Syracuse goal to make it 7-3 to the Terps, but the Orange stormed back before halftime.

Syracuse’s Tucker Dordevic and Lucas Quinn both completed first-half hat tricks at the end of the second quarter to make it 7-6 to Maryland with 30 minutes left to play.

Despite taking the early lead, the Orange were able to capitalize on Maryland’s struggles throughout their six-goal second quarter. Coach John Tillman voiced his frustration with his team’s execution during the tough run for the Terps.

“We didn’t play as clean as we would’ve liked, we left some [goals] out on the table in the second quarter,” Tillman said. “We were not winning faceoffs… and [Syracuse] kept getting possessions and then they would have good long possessions and I thought they executed really well.”

Wisnauskas bagged his hat trick halfway through the third quarter on an assist from Donville to extend Maryland’s lead to three.

While it looked like the Terps may shut out the Orange in another quarter, Syracuse found two goals in the final 33 seconds of the third quarter to make it a one goal game with 15 minutes remaining.

Wisnauskas had the answer to the Orange’s run, scoring the first of a three-goal run for the Terps as they extended their lead to 12-8.

Syracuse and Maryland traded goals before Dordevic grabbed his fifth goal for the Orange, but Owen Murphy scored his first goal of the game to restore a four-goal lead for the Terps.

Maryland’s five goals in the fourth quarter allowed the Terps to pull away from the Orange, and Tillman was happy with how his team pulled through down the stretch.

“I liked the way we finished the game, just thought our guys battled when things weren’t pretty or they weren’t going well,” Tillman said. “Our guys showed a lot of grit and resilience, and really stuck together.”

Maryland would kill off the rest of the time in its 14-10 win, thanks to a season-high 12 saves from McNaney, along with a four-goal performance from Wisnauskas and a hat trick from Donville.

“Logan [McNaney] robbed a few, I thought he was really on the ball,” Tillman said.

Despite giving up six goals in the second quarter, Maryland’s defense held strong throughout the rest of the match and the Terps’ late run was enough for them to remain undefeated.