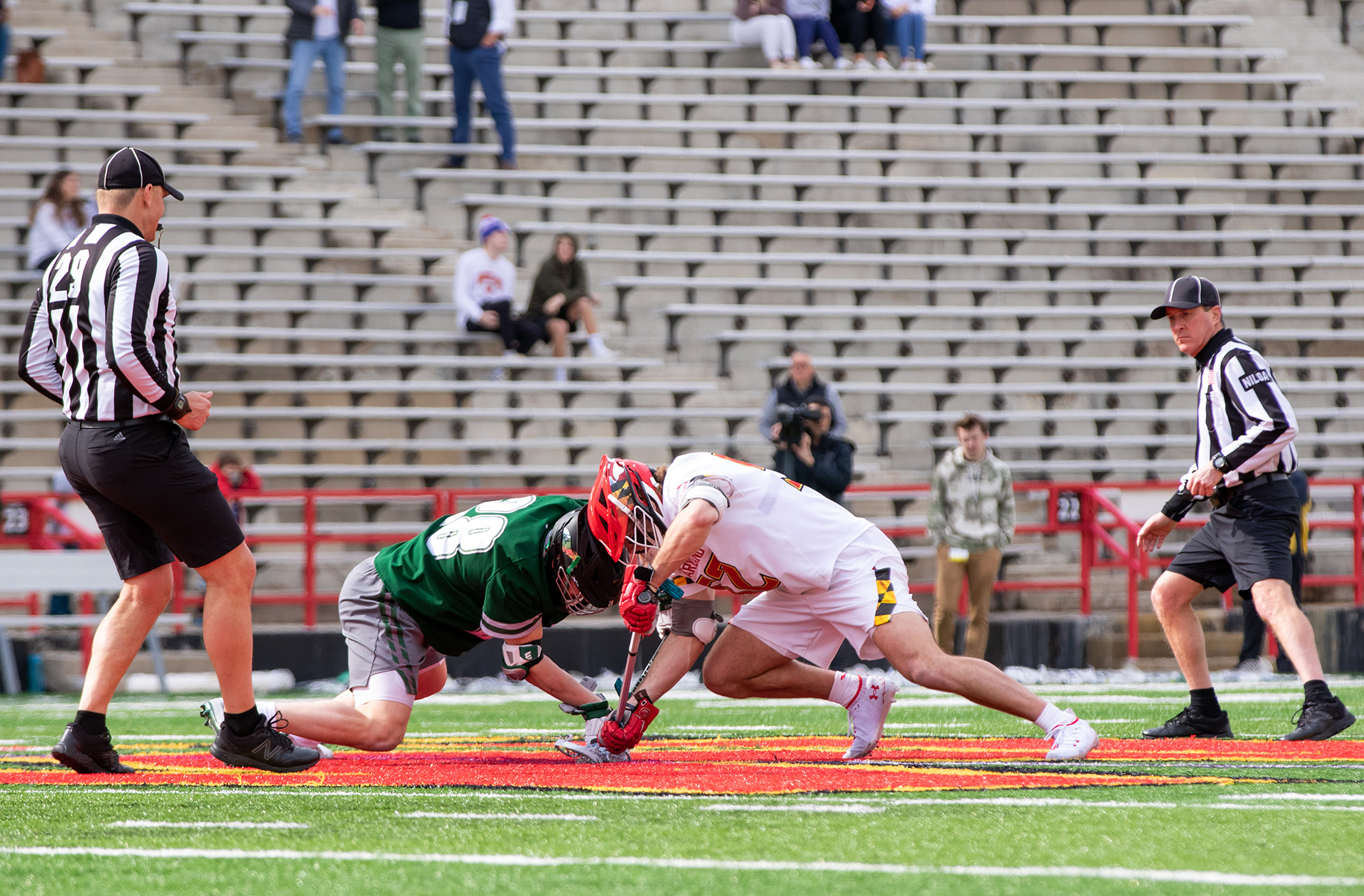 Toward the beginning of the second quarter, Maryland men’s lacrosse faceoff specialist Luke Wierman won a faceoff before striding down the field and scoring.

At the end of the second quarter, he did it again.

Wierman scooped up a faceoff with less than 14 seconds left in the frame and netted just seconds later, sprinting down the field before hesitating and finding the top corner for his second goal of the day.

The goal punctuated a second quarter in which Maryland outscored No. 10 Loyola 10-3, allowing the Terps to go into halftime with a nine-goal lead.

Despite also adding an assist in the second quarter, Wierman shined the most at the faceoff X.

The junior won 11 of his 13 faceoffs in the second quarter, allowing Maryland to dominate possession and take control of the game during its incredible scoring run.

Wierman would win 19 of 25 faceoffs throughout the game, propelling the Terps to a commanding 20-8 victory over the Greyhounds.

The faceoff specialist put his success largely down to Maryland’s preparation for the top-ten matchup throughout the week.

“They’re really scrappy in the middle of the field and everything and our scout [team] all week did a great job helping us prepare for that,” Wierman said.

The run in the second quarter put Maryland’s lead out of reach for the Greyhounds, who would never come within seven goals of the Terps in the second half.

Coach John Tillman gave a lot of the credit for that second quarter run to Wierman.

“You kind of look at the stats, alright 11 of 14 facing off, so you’re getting a ton of possession, you’re flipping the field,” Tillman said. “But also Luke was getting forward and again, he’s not only winning the face off, but he was able to kind of escape.”

Maryland saw the defensive improvement it was looking for after conceding 13 goals in its season-opener against High Point, keeping a dynamic Loyola attack in the single-digits.

That improvement allowed for the Terps to transition quickly and find a rhythm on offense, with 11 different goalscorers finding the back of the net. Tillman attributed some of Maryland’s success on offense to the Terps’ defensive performance.

“A lot of it came from getting stops, transition, guys just busting their butts and picking up tough grounders and giving us those opportunities.”

Defender Brett Makar won four ground balls during the game, tied for the second most of any player behind Wierman, who picked up 11 ground balls.

The senior was also notable in his distribution, pushing Maryland forward during transitions.

“I’m trying to be out there every day and pick up ground balls, as many as I can,” Makar said. “The coaches do a great job of putting us in a position to be under pressure, have to pick up the ball and get away from pressure and move it to the open guy.”