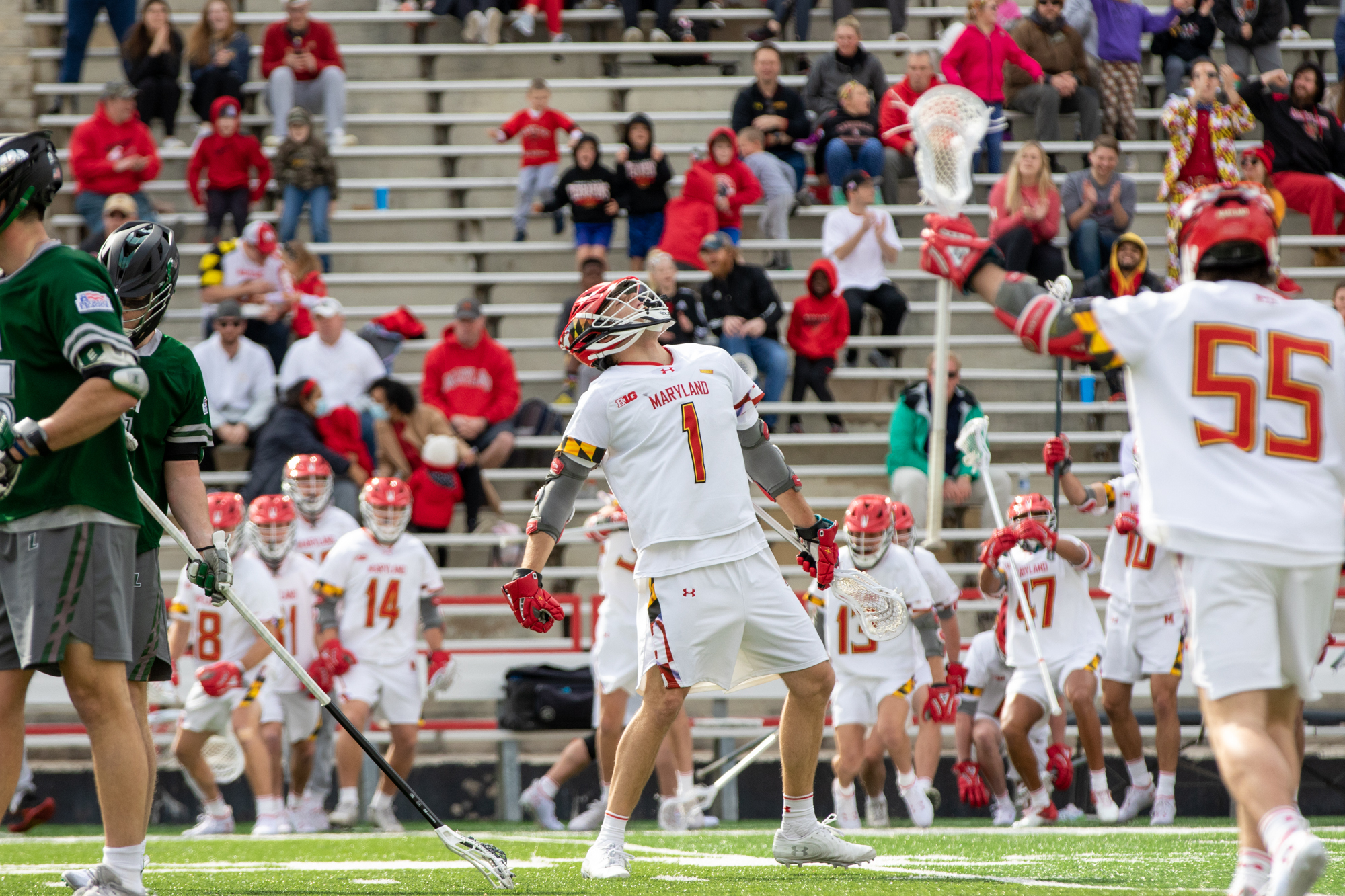 After Jonathan Donville scored his second goal of the game, Luke Wierman scooped up a faceoff before barrelling straight towards goal, firing past Loyola goalkeeper Sam Shafer to score Maryland’s second goal in six seconds.

Jack Brennan scored his first goal of the season within the minute, pushing Maryland out to a 7-2 lead it would never surrender in a dominant 20-8 win over No. 10 Loyola.

Coach John Tillman was surprised by the margin of victory and excited about his team’s effort in the big win, which he largely credited to the preparation of his scout team this week.

“Hats off to our scout team this week because I just felt like we had such a good week of practice,” Tillman said. “We have some guys down there that just did an amazing job.”

Jonathan Donville opened up the scoring just as he did in Maryland’s season opener, and goals from Eric Malever and Logan Wisnauskas helped the Terps get out to an early 3-0 lead halfway through the first quarter.

Loyola fought back with goals from Kevin Lindley and Adam Poitras to cut Maryland’s lead to one before Jack Koras scored his first goal of the season to make it 4-2 at the end of the first quarter.

Maryland extended its lead with an incredible run to begin the second quarter. Donville, Luke Wierman and Jack Brennan all scored within a minute to push the Terps’ lead to five.

Kyle Long, Daniel Maltz and Anthony DeMaio grabbed their first goals of the game as the half winded down, and Wierman scored his second goal of the game after winning a faceoff to give the Terps a 14-5 lead at halftime.

Not only were the Terps on fire on offense, but Maryland’s defense suffocated Loyola throughout the game. Defender Brett Makar was pleased with the defense’s improvement after conceding 13 goals against High Point in the team’s season opener.

“After last week wasn’t our best showing, and I think this whole week we were kind of just pushing the envelope of everything has to be personal,” Makar said. “You got to take everything personal and with the experience we have I just knew we were gonna bounce back.”

Murphy scored his second goal before Donville grabbed his hat trick early in the fourth quarter to extend the Terps’ lead to 13.

The Greyhounds struck two more times before Malever scored a hat trick of his own to give the Terps a 20-8 win over No. 10 Loyola.

The Terps’ domination was largely in thanks to Luke Wierman, who won 19 of his 25 faceoffs and added two goals and an assist.

Those added possessions were crucial, especially in the first half, to Maryland extending its lead to a point where Loyola couldn’t fight back.

“Not only were we able to get a lot of extra possessions, which obviously helps your confidence, helps your rhythm on offense,” Tillman said. “But then [for] Luke to get some goals and some other guys to get goals was huge for us.”

Maryland put on another offensive clinic, scoring 20 goals for the second straight game, this time from 11 different goalscorers.

With plenty of players in new roles, Maryland will certainly be a struggle for any team to defend with its depth and number of options going forward. Tillman’s excited to see what this dynamic group can do over the course of the season.

“It’s a really good group, it’s a fun group to be around,” Tillman said. “Versatile parts, flexible parts, guys that share. And anytime we score, I think everybody’s happy for whoever it is.”