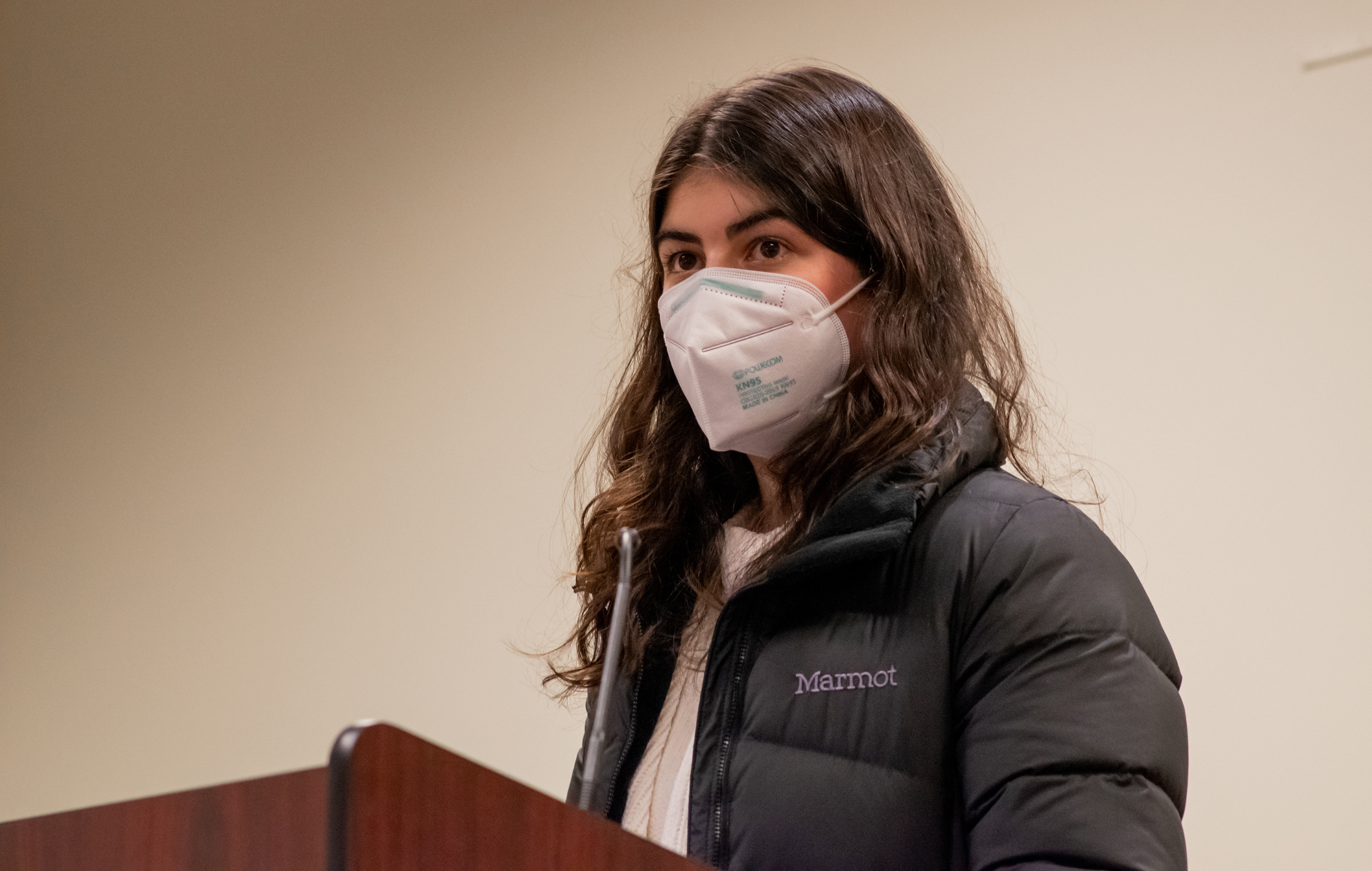 Olivia Chickering, Cumberland resident and freshman history major, speaks before the RHA senate on Feb. 15, 2022. Chickering recounted her frustrations during the recent flooding in her dorm and emphasized the insufficient procedures to help impacted students. (Autumn Hengen/The Diamondback)

The resolution follows a flood in Cumberland Hall Saturday night. A heating convector pipe burst, causing water to leak into rooms on the fourth floor as well as the floors below, according to the resolution. The water was extremely hot, and some students shocked themselves while reaching into the water to retrieve belongings.

Marks, who lives in Cumberland, said on Saturday at 9:30 p.m., water started leaking five doors down from him. He spent three hours helping other residents move TVs, MacBooks, notebooks and other belongings. Marks said he shocked himself while reaching into flooding water to unplug his friend’s video game set.

“Students had to find alternative housing for the night,” he said. “I’m fortunate enough where my room was not flooded. But I know that many people who live out of state lost thousands of dollars in equipment and books that are already expensive.”

Marks said some students haven’t returned to their dorms yet, and some dorms are “doubling and tripling” the number of people sleeping in rooms, because some students are staying with their friends.

Cumberland resident and freshman history major Olivia Chickering said she was doing homework Saturday night when hot water started dripping on her and eventually flooded her room. Chickering said she and her roommate had trouble finding RAs to help with the situation. When she returned to her room, she was disappointed with how the university handled the flooding.

“Much of my frustration from this event has originated from the lack of response from the university and their failed promises,” Chickering said. “After returning to our room the following morning, my roommate and I had to clean up both all of our furniture and the floors because the university had failed to do so.”

Sklute, who lives in St. Mary’s Hall, said this bill was inspired by the flooding there last December. A pipe broke in the building’s ceiling, leading to flooding and “extensive damage.” Students had to evacuate through windows on firefighters’ ladders,and one student was sent to the hospital due to burns, according to the resolution.

“This bill is really just urging the university to communicate better and be more transparent about the measures that they’re taking, in addition to trying to take preventative actions and kind of just urging them to overall do more for the students and their safety and well being,” Sklute said.