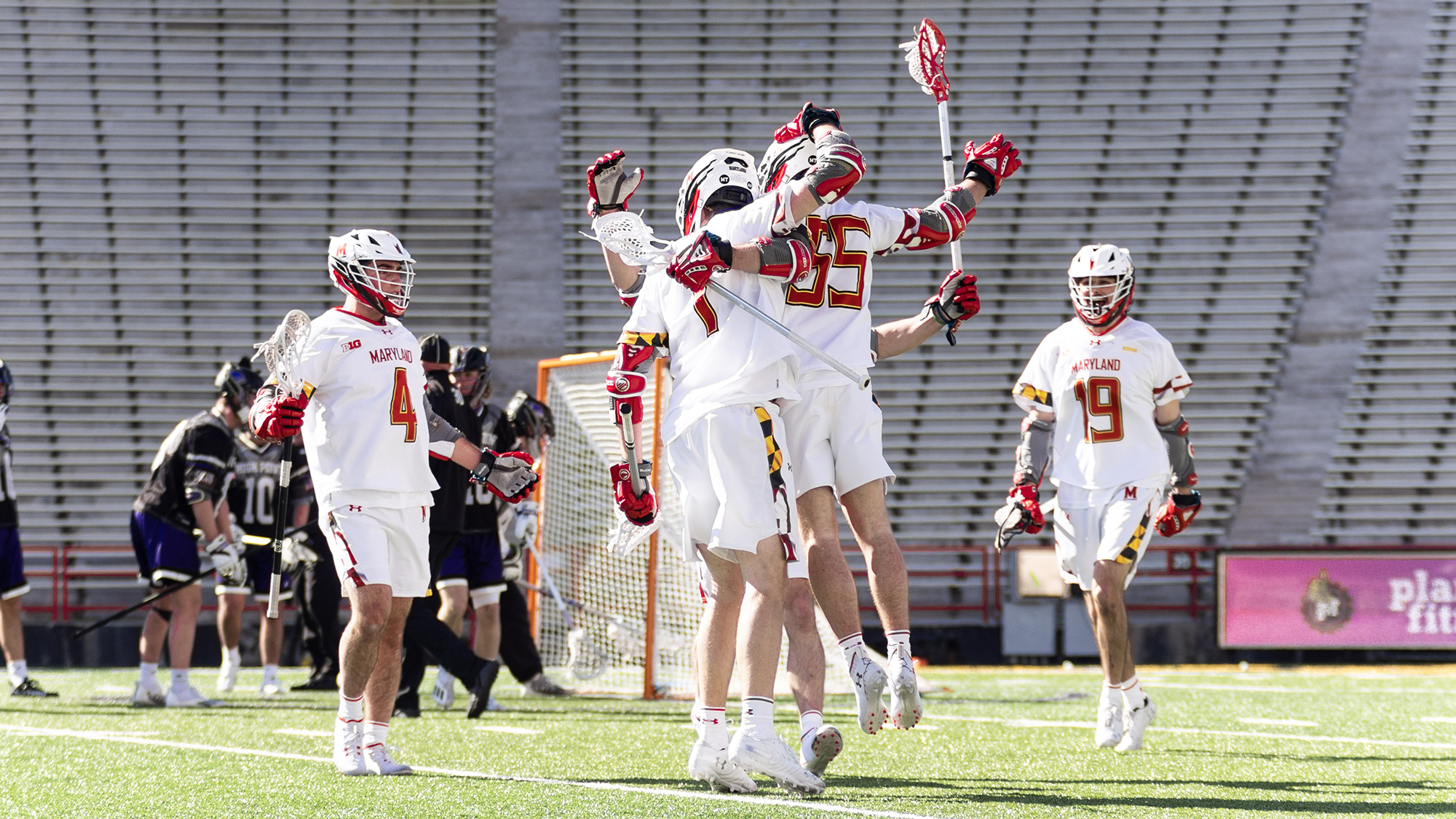 Owen Murphy celebrates a goal with his teammates during Maryland men's lacrosse's 21-13 win over High Point on Feb. 5, 2022. (Julia Nikhinson/TheDiamondback)

With just under 20 seconds left in the first half, Anthony DeMaio drove behind goal before finding a wide open Logan Wisnauskas. His powerful shot went through the legs of High Point goalkeeper Parker Green to give Maryland men’s lacrosse a 9-5 lead heading into halftime.

The goal was one of many for Wisnaukas, who had a memorable first appearance in the No. 1 jersey for the Terps. The attacker scored five goals and dished out three assists as Maryland dominated its 2022 season opener in a 21-13 romp of High Point.

Wisnauskas was one of nine different scorers for the Terps as Maryland’s offense fired on all cylinders despite the incorporation of multiple new players. Coach John Tillman was pleased with what his offense was able to do at times during the game.

“You’re trying to let them get into a flow and I think it took us a little time to get comfortable,” Tillman said. “But I think once they got comfortable, I thought some good things happened.”

The Terps got off to a quick start and ran out to a 4-0 lead in the first quarter, in part thanks to a trio of transfers.

Jonathan Donville, Owen Murphy and Keegan Khan all notched their first career goals as Terps in the opening quarter as Maryland jumped out to an early advantage.

The Terps’ initial momentum was halted when Nick Rizzo found High Point’s first goal of the game, but Wisnauskas scored his second and Daniel Maltz found his first of the season while Maryland was a man down. The veterans gave the Terps a 6-1 lead after the first quarter.

Maryland’s dominant quarter was owed largely to Luke Wierman and Virginia transfer Gavin Tygh at the faceoff position, who combined to win seven of eight faceoffs in the opening period.

The Panthers struck twice in a row to begin the second quarter, both times through Brayden Mayea.

After a five-minute goal drought, the Terps responded twice through Bubba Fairman’s first goal and Wisnauskas’ third of the half, restoring their four-goal lead.

Despite two more High Point-goals before halftime, Wisnauskas would finish his fourth score with just under 13 seconds left to make it 9-5 to Maryland at the break.

The Terps’ success in the first half was largely due to Wisnauskas’ dominance and their success at the faceoff position. Through just the first half, Wisnauskas notched four goals and two assists for Maryland. Wierman and Tygh also combined for 12 faceoff wins in 16 attempts.

Tillman has been pleased with his faceoff specialists, as the pair along with Shea Keethler and Michael Roche combined to win 22 of 37 faceoffs throughout the game.

“[Wierman’s] really taken it to the next level and I think Gavin [Tygh] coming in has been great,” Tillman said. “I think they both want to take every face off, but they’re such good teammates that regardless of who’s out there, they’re going to support each other.”

The Terps caught fire at the beginning of the third quarter — with Murphy and Khan both scoring twice to notch their opening-day hat tricks — including a pretty behind-the-back finish from Khan off of an assist from Wisnauskas.

Keegan Khan with an absolutely filthy finish off a DIME from Wisnauskas! Terps back up 5! #BeTheBest pic.twitter.com/bnt51seNrP

“I saw Logan with the ball up top and kind of just made like a little cut across the crease and realized I might be running at an angle, so I just shot behind my back,” Khan said about his goal.

“Didn’t really aim it, so I was happy to see it go in,” he laughed.

Donville scored his second of the game and Wisnauskas scored his fifth after a great transition from Maryland to make it 15-6 to the Terps.

Khan would score his fourth of the game to close out the third quarter on a solo effort, sprinting in front of goal and firing past Green. Three of Khan’s four goals in the match were unassisted.

Goals from Kyle Long and Murphy, along with Tygh’s first career goal for Maryland, gave the Terps a 19-9 lead late in the fourth quarter.

High Point would get on the scoresheet four more times — including Mayea’s fifth goal of the game — but Eric Malever and Maltz would both score late to put the cherry on top of a dominant season-opening performance.

Maryland did give up 13 goals, and while there were some bright spots on the defensive side of the ball, Tillman hopes to see some improvement as the Terps continue their season.

“You give up 13 goals, certainly that’s not the standard that we have,” Tillman said. “We collapsed. We had everybody inside ten yards. We just didn’t cover and really, that’s the part where you go from good to great.”

Maryland clicked on offense despite playing with many new faces, as transfers Khan and Murphy both had four-goal games in their first appearances for the Terps.

With a variety of scorers and a plethora of talents going forward, Tillman is excited to see what his offense can do this season.

“That’s what’s been fun with this group is they don’t really care who scores,” Tillman said. “They’re not really caught up in stats, they just want to win.”