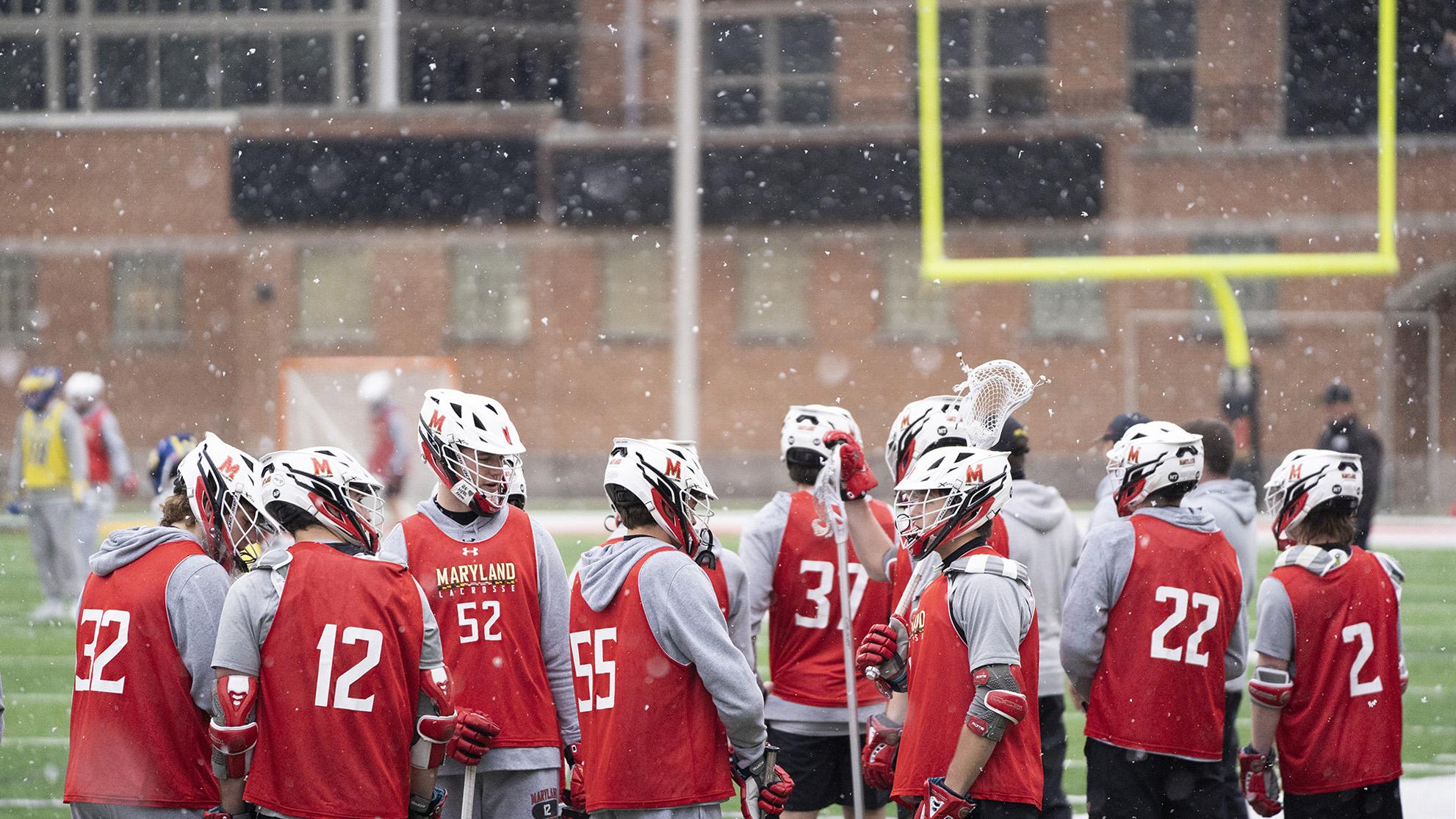 Maryland men's lacrosse during their scrimmage against Delaware on Jan. 31, 2022. (Taneen Momeni/The Diamondback)

After rallying back from a five-goal deficit, Maryland men’s lacrosse still needed one goal with 10.8 seconds left to send last year’s national championship game to overtime.

Luke Wierman won a faceoff before racing down the field and ripping a shot at goal that was saved. Virginia was able to clear the ball and Maryland players fell to the ground as the buzzer sounded, bringing a swift end to an instant classic the Terps narrowly fell on the wrong side of.

Despite a near-perfect season in 2021 where Maryland went 15-1 — winning the Big Ten regular season and tournament championships — defender Brett Makar says the loss against the Cavaliers will help drive the team to more success in the 2022 season.

“It definitely is a motivating factor,” Makar said. “When you end the season like that, you have that sour taste in your mouth.”

Maryland returns plenty of key figures who are using their fifth year of eligibility, hoping to continue the Terps’ success in the Big Ten and lead them to their first national championship since 2017.

That experience and last season’s success helped land Maryland at No. 2 in the USILA and Inside Lacrosse preseason polls, only behind the defending national champion Virginia. The Terps were also voted No. 1 unanimously in the 2022 Big Ten men’s lacrosse preseason coaches poll.

Despite numerous important players returning, the Terps will be without 2021 Tewaaraton Award winner Jared Bernhardt, who broke program records for career goals and points during his fifth season at Maryland.

In Bernhardt’s absence, Tillman expects more of his team to contribute on offense, leading to a more balanced and potentially unpredictable approach.

“This year we’re built a little bit more by committee, which I think is harder to defend because if we are doing it right, every game will probably be just a little bit different in a scoring column,” Tillman said.

However, Logan Wisnauskas will have a huge opportunity to step up into the hole Bernhardt has left, as he takes on the historic No. 1 jersey from Bernhardt.

Wisnauskas has notched 144 goals and 93 assists, totaling 237 points over his four years with the Terps.

Wisnauskas sits just 53 points behind Bernhardt’s career points record, a total he’ll likely be able to hit without having to be the focal point of Maryland’s offense.

There is also a plethora of young talent on offense, including Eric Spanos, who was ranked 12th on Inside Lacrosse’s 2021 incoming freshman rankings. The Terps will look to see if a newcomer can take up the third spot in attack alongside Wisnauskas and Maltz.

Inside Lacrosse ranked Maryland’s transfer class No. 2 in the nation, in part due to the NLL Entry Draft No. 1 overall pick, midfielder Jonathan Donville, joining the Terps from Cornell.

Donville will join a stacked midfield including preseason All-Americans Kyle Long and Anthony DeMaio, as well as fifth-year Bubba Fairman.

Roman Puglise was another of many players to return to Maryland for a fifth season. The USILA and Inside Lacrosse preseason first team All-American will be crucial as a defensive midfielder.

Another USILA and Inside Lacrosse preseason first team All-American is Makar, who returns to the Terps’ defense alongside Matt Rahill. They’ll be joined by transfer Owen Prybylski, who earned All-American honors at Villanova last year.

Makar stepped into a prominent leadership role last season and Tillman thinks he’ll continue to be one of a few leading voices on the team.

“Brett is probably the guy that became our alpha male midway through last year, he just kind of became that guy,” Tillman said. “That was our voice in the huddles.”

Logan McNaney returns for his third season at Maryland after the goalie earned All-American honors in 2021. Tillman stated he not only has confidence in McNaney, but also in backup Drew Morris, who will be back for his fifth season in College Park.

“We’re actually pretty lucky because we have two guys we feel great about,” Tillman said. “Drew Morris has had a fantastic fifth year for us and he’s been a pleasant surprise that he’s pushing Logan.”

McNaney will continue to be the first option in goal after starting every game for the Terps last year. Makar says that McNaney’s composure in goal is beneficial to the entire team.

“He’s always kind of just that free spirited guy who doesn’t really get too worked up, which is definitely calming for us,” Makar said.

After earning time as a playoff specialist last season, Virginia transfer Gavin Tygh will join Wierman as the pair prepare to split time at the position. Tillman talked about their relationship and how it will be advantageous to the team to have a deep pool of specialists.

“Gavin Tygh has come in and given us a big lift as well, a guy that we recruited out of high school and his confidence is really soaring,” Tillman said. “To have two guys that, sure they compete and they want to be the guy, but they can coexist and still want that lead position but also be happy for their teammate — that’s a rarity.”

The Terps won’t have freshman Dante Trader available, who initially intended to play football and lacrosse at Maryland. After a successful freshman campaign with the football team, Trader will have a chance to become an important piece of the Terps’ defense next season and decided to sit out of his freshman year of lacrosse after a conversation with Tillman.

However, Tillman says the door is still open for Trader to play in future seasons.

“When we talked after the [football] season he was very open and honest, which I can appreciate,” Tillman said. “I’d love to selfishly just have him on the field with us every day because I love being around him, but he’s also got a really good opportunity after what he did this year to be a leader on that defense.”

The midfielder was ranked ninth on Inside Lacrosse’s 2021 incoming freshman rankings.

While there are clearly a lot of talented young players on the team and prospects that could be joining the program in the future, the focus is on the here and now as Maryland gets prepared to face off against High Point, who is receiving votes in both USILA and Inside Lacrosse’s preseason polls, in its season opener on Feb. 5.

The Terps will face a tough non-conference slate, scheduling a championship rematch with USILA No. 1 ranked Virginia and matchups with No. 5 Notre Dame, No. 9 Loyola and No. 11 Syracuse. Maryland was only able to play Big Ten opponents during the regular season last year due to the COVID-19 pandemic. While Tillman joked that others may “think I’m crazy,” he believes it will get his players pumped up and prepare them for later in the season.

“We put together a real challenging schedule,” Tillman said. “What I found here is that’s what the guys get excited about, it brings out their best. It doesn’t mean we’re going to win or lose them, but it means the kids are going to get really focused and dialed in.”

The Terps no longer have players on the roster who played during Maryland’s 2017 national championship winning season. While this experienced group of players have ambitions of finally getting their hands on that trophy, especially after coming so close last season, Makar hopes everyone can cherish this last season that many in the group have together and take things one day at a time.

“Over time you really get close to each other, especially when you have the highs and lows that we’ve experienced, the great wins, winning a Big Ten championship, losing a national championship, no matter what it is,” Makar said. “That’s all part of that journey. I think for us, knowing that this is our last year together, [there’s] even more of an emphasis on guys just appreciating the time we have and really trying to make the most of it.”