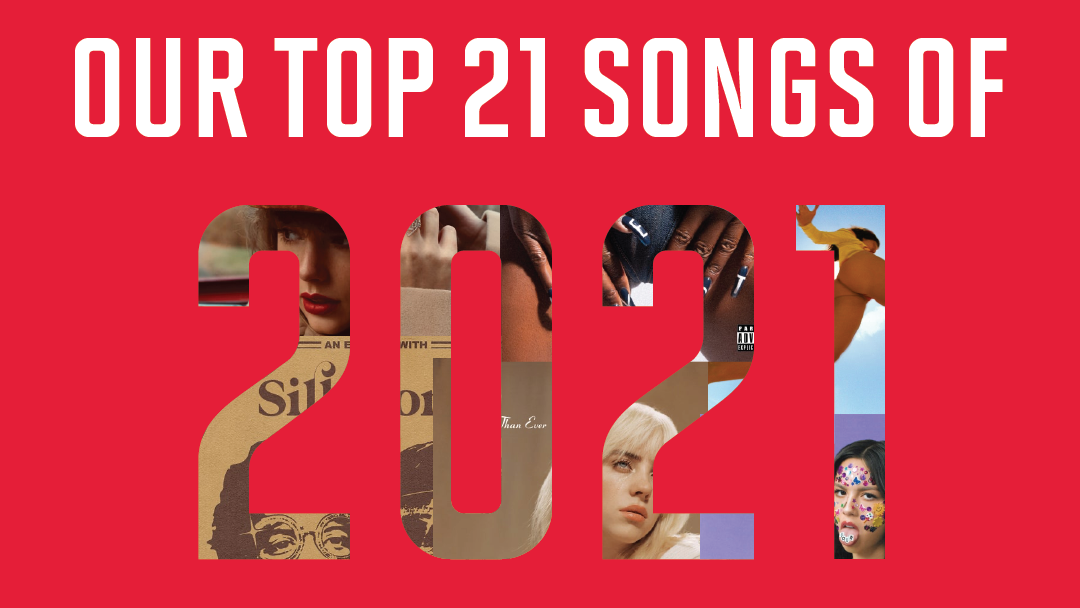 (Graphic by Kyle Russo/For The Diamondback)

As 2021 begins to wind down, we begin to reflect on many aspects from the past year. This year was interesting. In 2021, the world began to inch out of the COVID-19 pandemic and slowly returned to a semblance of normalcy.

With live music returning, the world of music began to flourish once more. The Diamondback staff decided to take a look back at 21 of our favorite songs from 2021.

Please note this is all a matter of our opinion and simply just songs we enjoyed. Also note that these are in no particular order.

“deja vu” proved Olivia Rodrigo was more than a one-hit wonder after the release of “drivers license.” Rather she is a well, spouting out the musically delicious and unfathomably vulnerable. The sour, the sweet, the angry and the bitterness of a failed relationship wrapped up in an ethereal psychedelic pop song. If breakups are about retrospection, where we become silent time travelers of our past, then “deja vu” perfectly captures this sentiment. But she refuses to remain quiet.

I am a sucker for silky smooth bass lines and Hiatus Kaiyote’s “Red Room” has just that. The song’s repetitive first verse grows into a deeply hypnotic, intimate illustration of where vocalist Nai Palm feels most at ease — her red room. It’s a tune I listen to on my sunset strolls or while I study until I can’t help but sing along. On Spotify, “Red Room” is the most-played track on the band’s latest neo-soul album, Mood Valiant, released in June.

Dijon’s exasperated tone makes me feel just as frustrated as he seems toward the subject of his September single, “Many Times.” His lyrics, “strawberry, raspberry / candlelight, satellite / Television, x-ray vision,” are fiercely spit out in a single breath and followed by “What’s it gonna take for you to listen?” It’s an impressive display of stamina. Even writing about it right now is making me feel a bit bitter myself.

There are no words to describe the musical caliber and lyrical genius that is Azealia Banks. “Fuck Him All Night,” does not fall short of what’s expected from her. I could write a doctoral level thesis on all the artistic lyrics and imagery involved in this song. From the single art featuring Banks’ nails spelling out Kanye West, to the simplistic crotch shot also featured as art, Banks delivered another classic for her repertoire.

I want to preface this saying if you get it, you get it, and if you don’t, you don’t. RuPaul’s Drag Race UK brought back its iconic girl group challenge for its second series, and after the success of series one’s “Break Up Bye Bye (Frock Destroyers Version),” there were big shoes to fill. The United Kingdolls understood the assignment and delivered a pop track for the ages. I loved this song so much it was my second most streamed song of 2021.

I’ve loved Halsey’s music since middle school, and their most recent album was no different. “The Lighthouse,” the second-to-last and longest song on their most recent album, is one of my go-tos for the rageful moments in my life. Halsey puts an eternal energy and power into the song, especially with the intense music their vocals coat and the short, silent moments at the start and end of the song.

One listen is all you’ll need to understand why Italian rock band Måneskin undisputedly deserved its 2021 Eurovision Song Contest win. The message that people shouldn’t hide their differences comes across with electrifying instrumentals and powerfully imperfect vocals, despite the language barrier. The fast paced third verse and bass solo control tension to their siren effect, demanding you click replay over and over, even if like me, you aren’t exactly a rock person. At least, that’s what Spotify claims.

This list wouldn’t be complete without my king Bad Bunny, aka the most streamed artist on Spotify for the past two years. He didn’t even release an album this year, but after listening to this bachata-pop masterpiece, you’ll understand why he still reigns supreme. Whether you’re in the mood to reminisce about a steamy past relationship or just in the mood to dance, this is the song for you.

When Nicki Minaj put her 2009 mixtape Beam Me Up Scotty on streaming services this year, she gave us the gift of “Seeing Green.” The track is a reminder that Minaj, Drake and Lil Wayne are the perfect trio, and provides some major early 2010s Young Money nostalgia. From its lyrics, backing vocals and slow, steady beat, this song is nothing but 5:39 of smooth listening.

It’s rare a seven minute song holds my undivided attention, but Spellling does just that and more. Her album The Turning Wheel has already made her an underrated musical genius, and this song is the crown jewel of that legacy. Every listen feels like I’m on the hero’s journey, complete with challenges, atonement and even a return to normalcy. It might not be the most traditional listening experience, but it’s definitely a cinematic one.

Remi Wolf was probably my best discovery of this year. Her catchy, upbeat melodies, bright, childlike aesthetic and borderline ridiculous (but also kinda genius) lyrics harken back to a simpler time in my life. Listening to her just never gets old, and that especially goes for this song. “High libido, cheat on Chester, fuck with Fritos”: I don’t know who else could write that lyric but her. It means absolutely nothing, but somehow everything at the same time.

Billie Eilish is a certified sad girl in her 2021 album Happier Than Ever. The soft, alluring vocals of “Your Power” mixes with lyrics that sting and remind us that fame takes its toll on the young. Her instrumentals are simple yet attentive, bringing out the vulnerability the song calls for. This ballad signaled a move away from outright aggression and into vengeful lamentation.

I’ll bite the bullet and admit some parts of Solar Power aren’t memorable — but “Secrets from a Girl (Who’s Seen it All),” shines. It’s a nostalgic look back on Lorde’s progression over the past years. With a gentle backing and sentimental lyrics, it’s the perfect reassuring ballad for wondering what the future holds. I’ve spent many an evening staring at the ceiling and reminiscing while this plays.

The jumpy acoustic guitar and vocal effects surrounding Gus Dapperton’s raspy tone make “Sober Up” the great song that it is, along with its disorienting music video. For such an emotionally heavy track, presumably about Dapperton’s struggle with mental health and drug use during intense touring, its beat is almost cheery. Dapperton contradicts this tone by opening the track with the lyrics “On the floor / I can’t breathe.” The song shines in its vulnerability.

This bouncy single is a staple of Westone Estate’s style: fun and carefree. Although the North Carolina group is striving for mainstream success, this single feels like a couple of dudes just having fun making music together. It’s so refreshing to see some Desi guys making it somewhere in music. You can literally hear the smile on their faces as they sing.

Still Woozy’s music is endlessly creative, playful and melodic. “Rocky,” released in February, grew to define the spring of 2021 for me. Its lush synths tell of greenery and its loping bass of sunshine. The pre-chorus is a brief rain shower and the triumphant chorus disperses the clouds. Cascading vocal tracks sing of a sleepy, cozy kind of love.

This track was one of the few highlights off of Drake’s latest LP. Yes –– it’s unapologetically over the top, ridiculous and narcissistic. Yet it just exudes fun. In truth, the trap trio doesn’t take itself too seriously as evidenced by their laughable music video. A crisp beat, a crazy catchy hook and memorable verses leave listeners struggling to stop themselves from dancing. It’s an instant egoboost.

Although the original “All Too Well” came out in 2012, Taylor Swift released the rumored and long-anticipated 10 minute version with Red (Taylor’s Version). In additional verses, Swift reveals more details about her relationship with an older man, creating parallels to “The Moment I Knew.” The 10 minutes are absolutely heart wrenching, especially when Swift sings about how her lover kept her “like a secret” while she kept him “like an oath.”

Bruno Mars and Anderson .Paak came together to drop one of the best albums of 2021 in An Evening With Silk Sonic. The duo successfully topped their debut single, “Leave The Door Open,” with “Smokin Out The Window.” Draped in Bootsy Collins’ influence, both artists sound incredible on a track that’s impossible not to sing along to, not to mention the incredible music video that came with it.

The 17-year-old Prince George’s County native made one of his few drops of 2021 count with “04.” The November single includes an ear-catching sample and smooth production that allows the artist to display an array of flows, most notably in an incredible second verse. Accompanied by a great music video that constantly cuts to camcorder footage, redveil is primed for a big 2022.

Faye Webster released I Know I’m Funny haha, a “no skip” album, with a justifiably popular title track. “Cheers,” however, offers a fresh, new Webster. She makes her badass debut with this rock ballad. Webster’s trademark sound has twang with a floating steel guitar — but this is anything but. The only thing preserved in this track is her classic indie folk voice singing a toast to you.