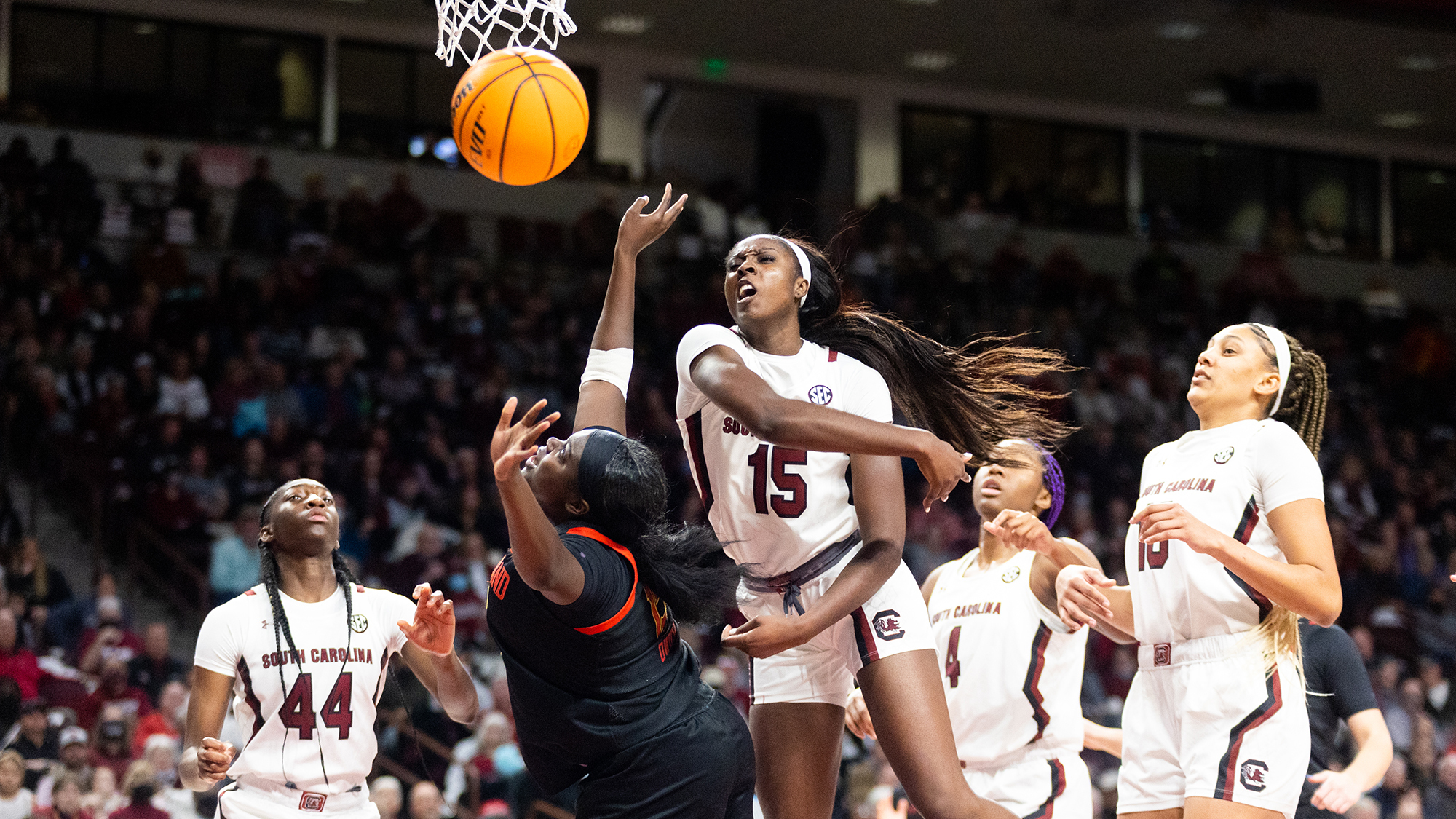 Maryland women’s basketball struggled to finish possessions on Sunday. With less than a minute remaining in its matchup with No. 1 South Carolina, the No. 8 Terps had a chance to get the ball back and stage a comeback. But they repeatedly failed to corral rebounds after missed free throws.

The Terps gave the Gamecocks extra possessions all game, giving up 24 offensive rebounds and losing the overall rebounding battle by 27 in a 66-59 loss on the road.

“The moral of the story was rebounding, the size, you saw that late game, you can’t go minus 27 on the class like we did and give up 24 o-boards,” coach Brenda Frese said. “But areas that I know we can correct and improve on.”

The loss overshadowed a strong performance by Maryland sophomore forward, Angel Reese. After a 20-point, 10-rebound performance against Player-of-the-Year candidate Aliyah Boston, Reese showed that she belongs in the category of dominant bigs in college basketball.

“We put up a fight,” Reese said. “I’m happy with my teammates and I know I will go to war with them any day.”

Reese was a bright spot for the Terps. She drove to the rim and finished or drew fouls. On defense she played as one of Maryland’s rim-protectors and at the top of the press, doing both without fouling.

[Maryland women’s basketball dials in on offense ahead of No. 1 South Carolina matchup]

Late in the fourth quarter, she stared down Boston. Reese feinted with the ball, forcing Boston to flinch before driving to the rim and finishing through contact for an and-one. But with a chance to cut the lead to one with less than a minute left, Reese faltered for one of the few times on the afternoon. She missed a layup in a play that would all but seal the game for the Gamecocks.

“Angel was just making plays for us,” Frese said. “She was fresh, she had a ton of energy. I thought she was such a difficult matchup for for for them.”

The Terps struggled offensively in the first half. They shot just 34.4 percent from the field, but they were able to close in on the Gamecocks before halftime — South Carolina still went to the locker room with a 34-30 advantage. The Gamecocks looked like they might finish the half with an 8-0 run but Reese prevented that with a steal and score.

Mimi Collins and Reese stepped up in the opening quarter as the two leading Maryland scorers with six and five points, respectively. Collins’ scores came off a pair of three-pointers while Reese knocked down a field goal and three free throws.

Ashley Owusu was hounded by the Gamecock defense as she labored through a 3-of-17 game. She finished with 11 points, five of them coming from the free-throw line, and no assists.

The third quarter was a series of runs for both teams. The Terps came out with a flurry of Katie Benzan three-pointers, sparking a 10-4 run that tied the game up at 40. But a 7-0 run would power the Gamecocks, who would end the quarter up four.

Outside of the rebounding issues, Maryland’s defense was impressive as it limited South Carolina to just 36 percent shooting from the field and just 3-of-17 from beyond the three-point line.

“We really focused on packing it in and getting out to those shooters on the pass of the ball,” Faith Masonius said. “I think it definitely gave South Carolina some difficulty inside.”

The performance was a welcome change from the last time the Terps faced a ranked opponent in the Bahamas when a shorthanded squad was dominated in two games. This time, they stayed close and showed that they have the talent to compete with the best.

But moral victories still result in losses, and Maryland’s already suffered its third in the regular season, matching the amount they had all of last year’s slate. Frese said her team has grown and gotten hungry from those losses two weeks ago but the journey still isn’t finished with conference play approaching.

“Now, we got to continue that hunger to keep getting better.”