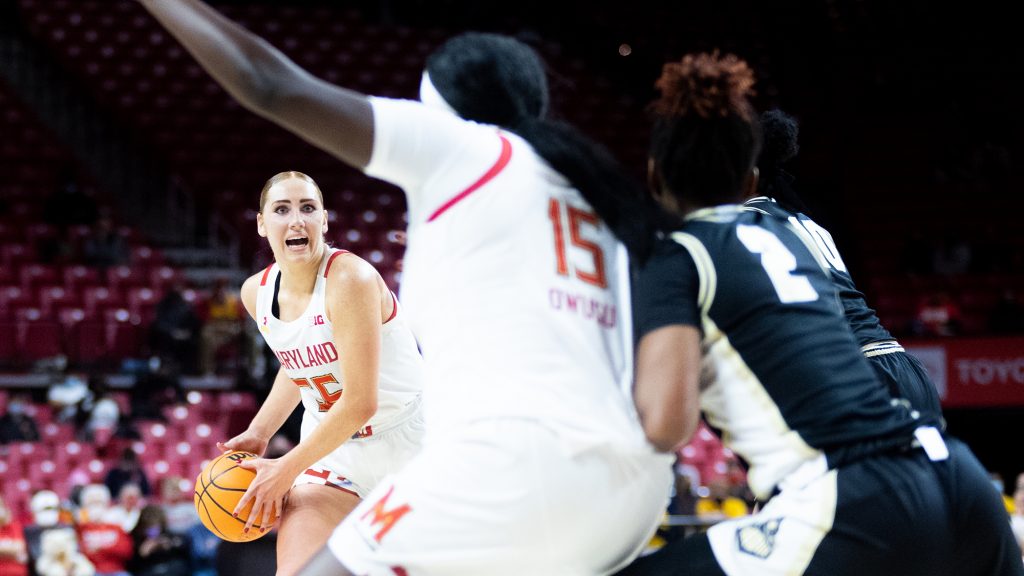 Maryland women’s basketball made every effort to fend off a hungry Purdue team in search of a huge upset, Wednesday night. Led by an efficient 22 points from Brooke Moore, the Boilermakers sped the game up with its 32 three-point attempts.

While the Terps love to run, Maryland didn’t feed into Purdue’s temptations. Instead, they used a methodical approach to dissect the Boilermakers’ defense and ultimately triumph thanks to a dominant second half.

“We were able to kind of get the rhythm of their offense by the fourth quarter,” coach Brenda Frese said.

Dump offs to cutters late in the shot clock flaunted the Terps’ patience in the tight contest, while Maryland’s big run late opened the floodgates to its familiar run-and-gun tactics. The offensive diversity showed how versatile Maryland can be as the close game turned into a blowout.

The exclamation point on a 50-31 second-half performance didn’t come on one particular play, but rather a top to bottom effort from the Terps rotation. All five starters hit double figures in what turned into a commanding 86-71 victory.

Ashley Owusu led the way with 20 points as No. 8 Maryland improved to 9-2 on the season.

“We were disappointed in the first half, but we have to take some lessons and learn from it,” Katie Benzan said. “We want to show that we’re a top-10 team and we deserve to be in that conversation.”

Within the first two possessions, Owusu was able to make her mark.

The senior guard collected two offensive boards during the first trip down the court before sinking her patented elbow jumper. Purdue’s opening possession then didn’t last long as Owusu picked the pocket of Jeanae Terry for a lay-in the other way.

However, while Owusu and the Terps forced four turnovers in the early portion of the quarter, and the offense operated with terrific poise, its early 9-2 lead soon turned to a deficit.

Maryland may have gotten too comfortable following its hot start. After having their momentum washed away thanks to a 75% shooting clip from the Boilermakers, the Terps found themselves trailing by one after 10 minutes of action.

The defense didn’t fare much better from there as they continued to struggle to contain Purdue’s hot shooting, particularly that of Moore. Off the bench Moore put up 17 first half points, including 12 in the second quarter.

Of her four makes from deep in the quarter, three came during an 11-5 run for Purdue that broke the game open. Maryland made just five field goals in the quarter.

“I was disappointed in our first half,” Frese said. “I thought when we got the lead we relaxed and got too casual. That made it a very difficult game where we’ve got to be able to clean that out and put our foot on the gas.”

The run thrust Purdue into a 40-36 lead heading into halftime, but an offense due for regression plus 15 first half turnovers allowed the Terps to stay above water.

Lurking in the shadows was a crucial third quarter aided by an incentive to get to the rim. Of Maryland’s 23 points in the quarter, 16 were found at the free throw line or in the paint, allowing the Terps to garner their largest lead of the game with 3:22 left in the quarter.

Moore and the Boilermakers punched back with a 6-0 run late, but the Terps held strong to exit the quarter having outscored Purdue by 10.

The Boilermakers tried to get Maryland to play into its shooting frenzy, but the adjustment from the Terps to slow the game down and piece together a sizable lead proved to be the difference maker.

A 13-2 scoring run in the middle portion of the fourth quarter set the stage for another impressive Maryland victory. The win pushed the Terps’ win streak to three and while they have struggled at times to put away their opponents over that stretch, this recent bout with Purdue flexed the team’s ability to adapt.

“We can play fast and then slow it down when we need to,” Owusu said.