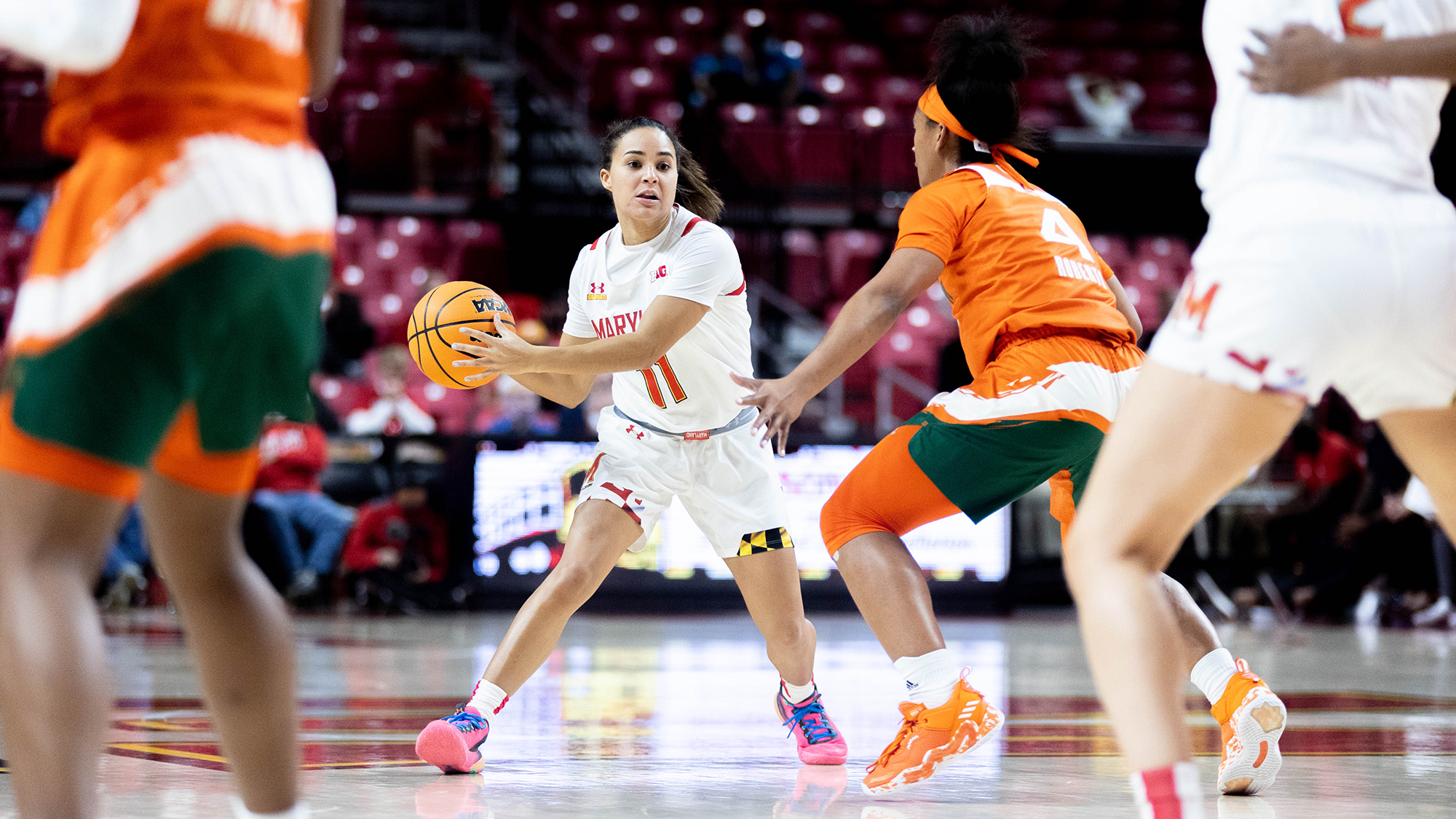 With 1:37 remaining in Maryland women’s basketball’s game against Miami, Angel Reese missed the and-one free throw that would have extended Maryland’s lead to three.

Her long miss was back tapped to Faith Masonius, who fluidly shoveled the ball to Katie Benzan behind the arc.

Benzan’s thunderous conversion from deep put the Terps up two possessions and free throws then put the close game away. It was a welcome back party of epic proportions and one that set the tone for Maryland’s recent two-game stretch.

Coach Brenda Frese’s squad had to scratch and claw to end the two-game skid against Miami on Dec. 2. It came down to two players who returned from illness that day — Benzan and Masonius — to make the big play to put them over the edge.

After a valiant home victory against then-No. 6 Baylor, Maryland entered the Baha Mar Hoops Pink Flamingo Championship in the Bahamas as the No. 2 team in the country.

The Terps met two fellow AP Top-10 teams, North Carolina State and Stanford, but they lacked the momentum from their huge win earlier in the week.

Maryland suffered a pair of 18-point losses. A big factor of the poor showing in the Bahamas was the lack of depth at Freses’s disposal as Benzan and Masonius didn’t travel due to illness.

Maryland has gotten back to its winning ways from the beginning of the season with two victories over Miami and Rutgers. And while the results haven’t been something to write home about, there’s no doubt that the returns of Benzan and Masonius have been instrumental in this recent string of victories.

Against Miami, the two played heavy minutes in their return to the court.

Benzan was a bit sporadic with four fouls, but her big three late in the game was the difference maker. That opportunity wouldn’t have come without the hustle from Masonius, who logged three steals and six rebounds across 31 minutes.

“She’s always on the floor diving for loose balls because she’s competitive and isn’t going to allow her opponent to get that possession,” Frese said.

The junior guard’s defensive prowess would come in handy once again in another tightly contested showdown versus Rutgers on Sunday. Masonius’ three-block afternoon helped keep afloat a porous defensive showing on the road.

“She kind of gives us a calming presence,” Frese said. “She gives us that voice to kind of hold us all together.”

Defense then complimented the offense as Benzan got back up to speed with 15 points over a season-high 36 minutes.

Benzan and Masonius have been side pieces to the explosive play from Reese and Owusu thus far this season, but there’s no doubting the impact they have on the team’s performance.

“Katie is a great, great shooter and she spaces the floor out,” Owusu said. “[Not having her in the lineup] impacted us a lot.”