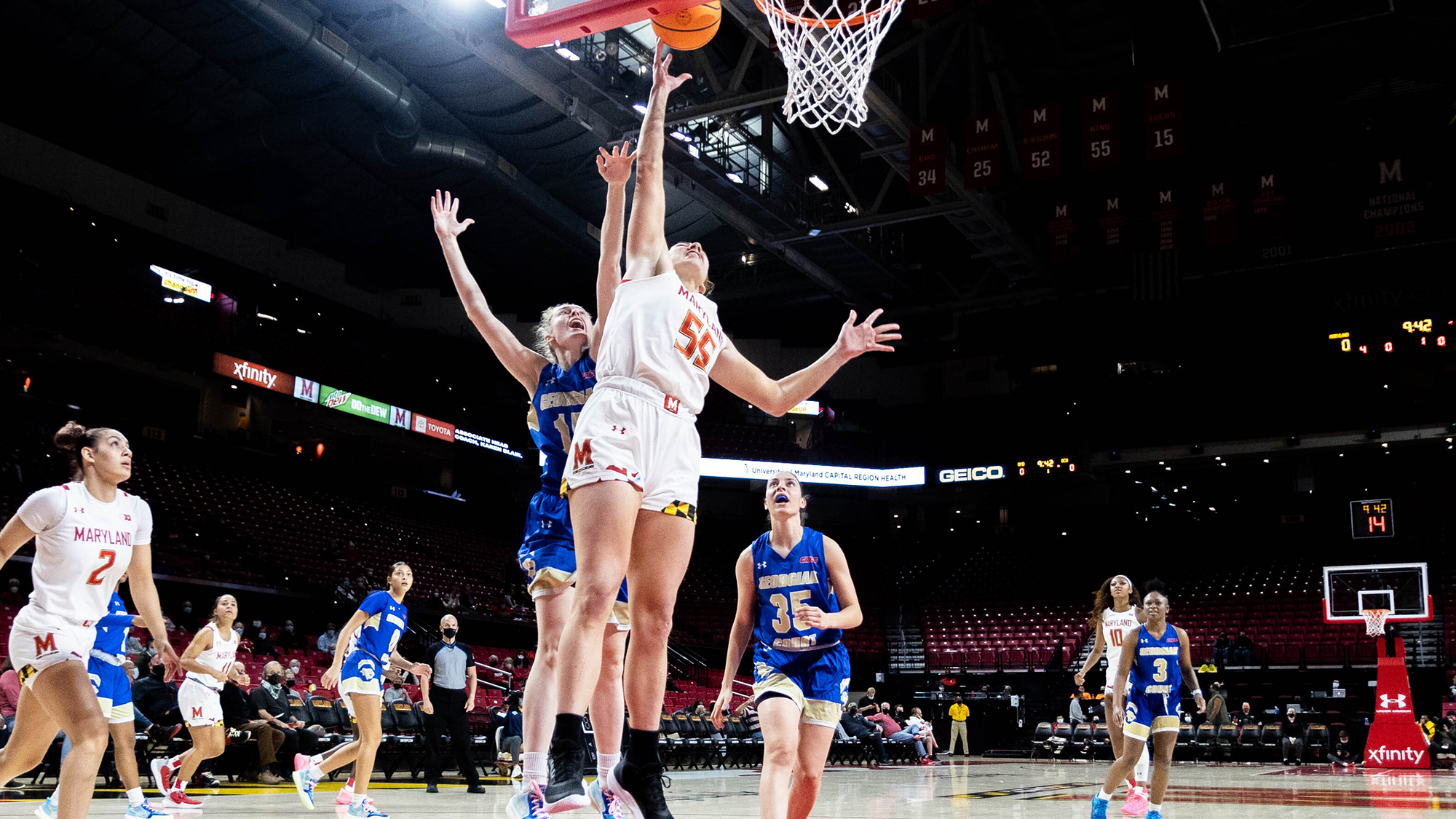 Chloe Bibby goes up for a shot during Maryland women’s basketball’s 125-33 win over Georgian Court on Nov. 4, 2021. (Julia Nikhinson/The Diamondback)

Maryland women’s basketball seemed a step slow in yet another early-season contest. In the Big Ten opener against Rutgers, the team was struggling to find its rhythm.

The Scarlet Knights cut the deficit to as little as four with just over seven minutes remaining. But Maryland’s top option off the bench turned the tides in her team’s favor.

Shyanne Sellers was an afterthought for much of the contest as the starting five accounted for 92% of the total output, but the spark the freshman provided gave Maryland a much-needed cushion.

“Just coming off the bench trying to bring energy,” Sellers said. “I know we were in a little bit of a slump, so I know I needed to do something and create some energy.”

After Ashley Owusu made a jumper to push the Terps’ lead to six, Sellers made two key free throws at the six-minute mark. She then converted on the next possession to grow the lead to 10 before picking off a pass from Jailyn Mason that led to more free throws the other way.

While Maryland led the full length of the game, Sellers’s jolt off the bench set the Terps apart. She initiated several key plays down the stretch to ultimately help put the game away as Maryland emerged victorious, 73-59.

“[There’s] a lot of areas for us to continue to keep growing and improving in,” coach Brenda Frese said. “Every game is going to be this competitive in the league.”

Maryland was rolling from the start — Katie Benzan sank two threes on consecutive possessions to get the offense moving. The Terps benefitted from five turnovers from the Scarlet Knights in the first quarter, but the half-court offense was lagging behind.

The in-and-out game for Maryland was failing to produce admirable results, with the Terps missing all six threes attempted since Benzan’s scoring barrage in the opening moments.

On top of that, second chance opportunities were limited by a determined Rutgers defense. Maryland’s three offensive rebounds led to just two second-chance points, cutting out a key component of its offense.

But Frese’s squad thrived by forcing turnovers and running the floor. The Scarlet Knights finished the game with 19 giveaways and the Terps collected 14 points off 12 Rutgers turnovers in the first half.

Despite a hard-fought half by the Terps, a persistent performance from the Scarlet Knights kept the game within their reach. The teams headed into the break with Maryland up, 38-23.

By limiting second-chance opportunities and shooting at a solid clip from deep, Rutgers began the second half on a 9-2 run. It further kept Maryland on its toes with its plus-10 offensive rebound margin in the second half.

It was a very uncharacteristic quarter for the Terps — particularly in the final 90 seconds. Pairs of forced turnovers and offensive boards for Rutgers kept the ball out of Maryland’s possession.

Frese’s squad continued to stall into the fourth as Angel Reese picked up her fourth foul. Rutgers cut it to a two-possession game early in the quarter as the Terps repeatedly turned the ball over. But a balanced display from Maryland’s starting five set the Terps apart.

Each member of the starting five found her groove at one point or another.

Chloe Bibby and Benzan were the major catalysts as they collected 14 and 15 points, respectively. Their executions kept the Terps ahead the length of the game despite slow starts from Reese and Owusu.

“I love when Chloe’s in this mindset, her game was flawless tonight,” Frese said. “I thought she made great plays for us down on the glass. We needed all seven of those boards that she went and got for us.”

But even with the slow starts, the two leading scorers on the season finished the day strong. Reese put forth another phenomenal outing as she led the team with 18 points. Owusu struggled to generate her offense and even fouled out, but she still amassed double-digits with 12 points.

Maryland was thrown out of rhythm all night as they collected just nine offensive rebounds and six second-chance points. But the fast-paced offense eventually caught up to the upset-minded Scarlet Knights as Maryland pulled away late to open its conference slate.