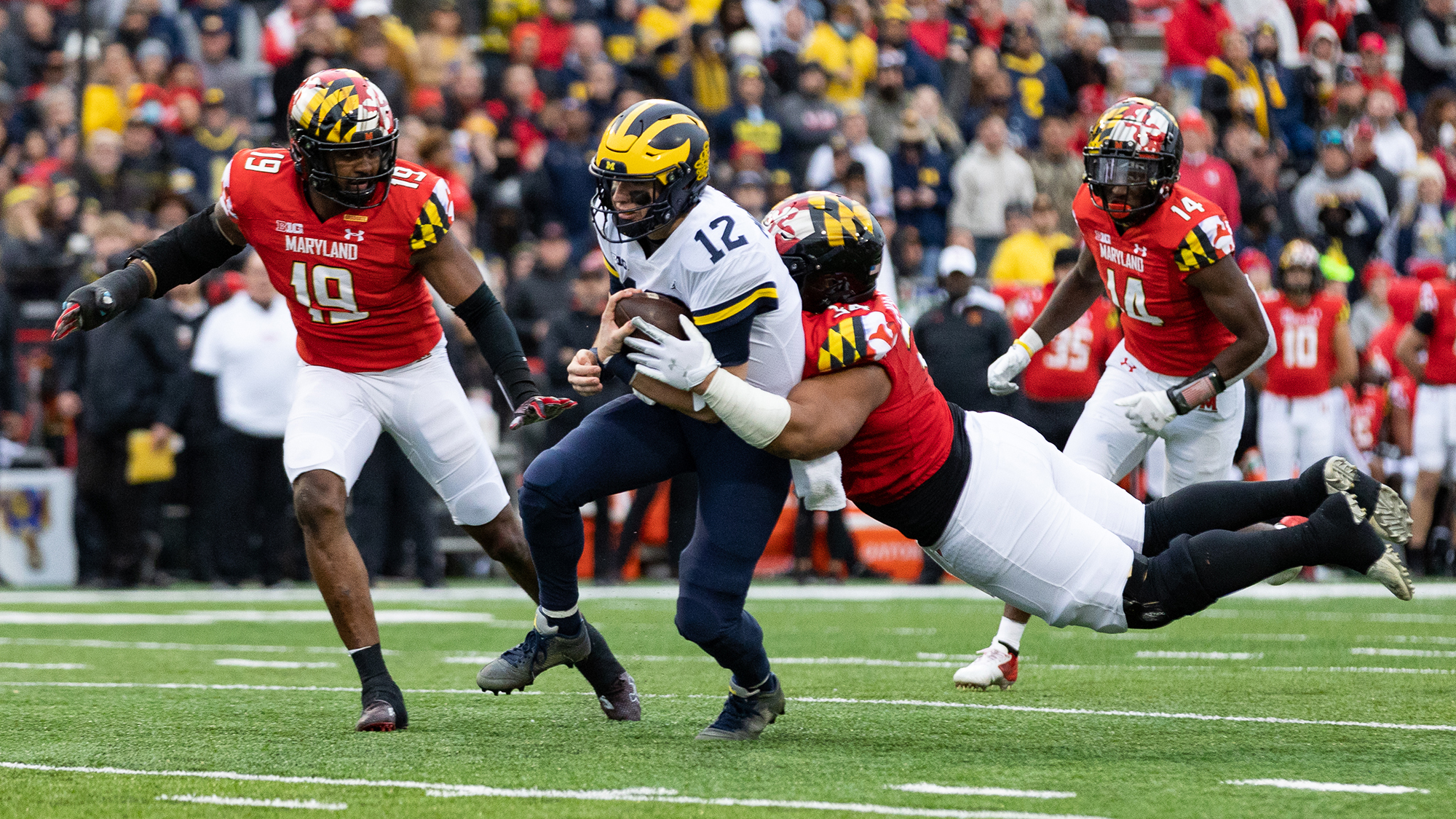 Maryland's Mosiah Nasili-Kite lays out in an attempt to tackle Michigan's Cade McNamara during the Terps' 59-18 loss to the No. 8 Wolverines on Nov. 20, 2021. (Cam Andrews/The Diamondback)

As the clock ran down on a disheartening 59-18 loss to No. 8 Michigan, Maryland football cemented its status.

The Terps had no cakewalk with four top-10 matchups in their conference schedule and a fierce meeting with Penn State on Nov. 6. But, Maryland came away from those games with zero victories.

Coach Mike Locksley made it a point this season that the Terps needed to take the next step as a program — making a bowl game. And they can still do so.

However, Maryland has been unable to show up for matchups with top-tier talent. The Terps are incapable of an upset. And they are no “trap game.”

“All of us, from coaching to playing, we weren’t our best today,” Locksley said. “And I gotta get us to be our best.”

Maryland has had a troubled history as of late with teams in the AP Top 25. Since 2018 — when most of those honored in Saturday’s senior day first joined the Terps — they have won two of 16 matchups with teams ranked at the time.

Those two wins came from early-season victories over Texas in 2018 and Syracuse in 2019. While the Longhorns ended up with a 10-win season, the Orange went 5-7 that year.

The issue doesn’t just come down to not being able to get the result it’s looking for against high caliber teams — it’s how Maryland plays them.

The Terps lost those 14 ranked games by an average of over 28 points per game. Only one game was decided by a single score — 2018’s Ohio State game.

Maryland was as close as could be to a signature upset on its home field when it took the No. 9 Buckeyes to overtime and couldn’t complete a potential game-winning two-point conversion.

Since that game, the Terps rarely have even been close to a score from upsetting a ranked squad.

This season has featured two of the narrower margins of defeat with 17- and 19-point losses to the Nittany Lions and Michigan State, respectively.  But even those games were decided before the final moments.

The throughline this year for big-game problems has been executing the game plan that Locksley and his staff set every week.

But, inopportune penalties and small mistakes — an issue Maryland hasn’t solved all season — reared its head to throw a wrench in those plans.

“It’s not a lack of discipline or a lack of ability,” linebacker Ruben Hyppolite said. “It’s just that sometimes, in critical times, a lack of focus that we need to execute.”

The most noxious of those came in the second quarter when the Terps were poised to find the end zone for the first time Saturday.

Inside the five-yard line, Tayon Fleet-Davis picked up a few yards toward getting a touchdown, but a chop block call set Maryland back 15 yards.

That ended up not being a problem, as Rakim Jarrett picked those 15 yards back up on the next play. After getting a new set of downs, the Terps prepared to snap the ball when movement along the line set them back another five yards.

Before they could get off their next play, Jarrett was called for a flag of his own with an illegal shift, another five-yard penalty.

Maryland settled for a field goal and wouldn’t near the end zone for another quarter’s worth of play.

Locksley and the Terps knew that mistakes like those in the red zone would not allow them any chance to beat a team like Michigan, who is now set to face Ohio State next week for a spot in the Big Ten title game.

Now Maryland prepares for its fourth attempt at getting to a bowl game against Rutgers.

Although a victory there does nothing to give the Terps the head-turning win that has eluded them, it would give them just what they set out for this season.

“The urgency is there. Guys want it, the staff wants it,” wide receiver Carlos Carriere said. “I’m excited for the next opportunity because we can still accomplish what we wanted to accomplish, which is to be bowl eligible.”