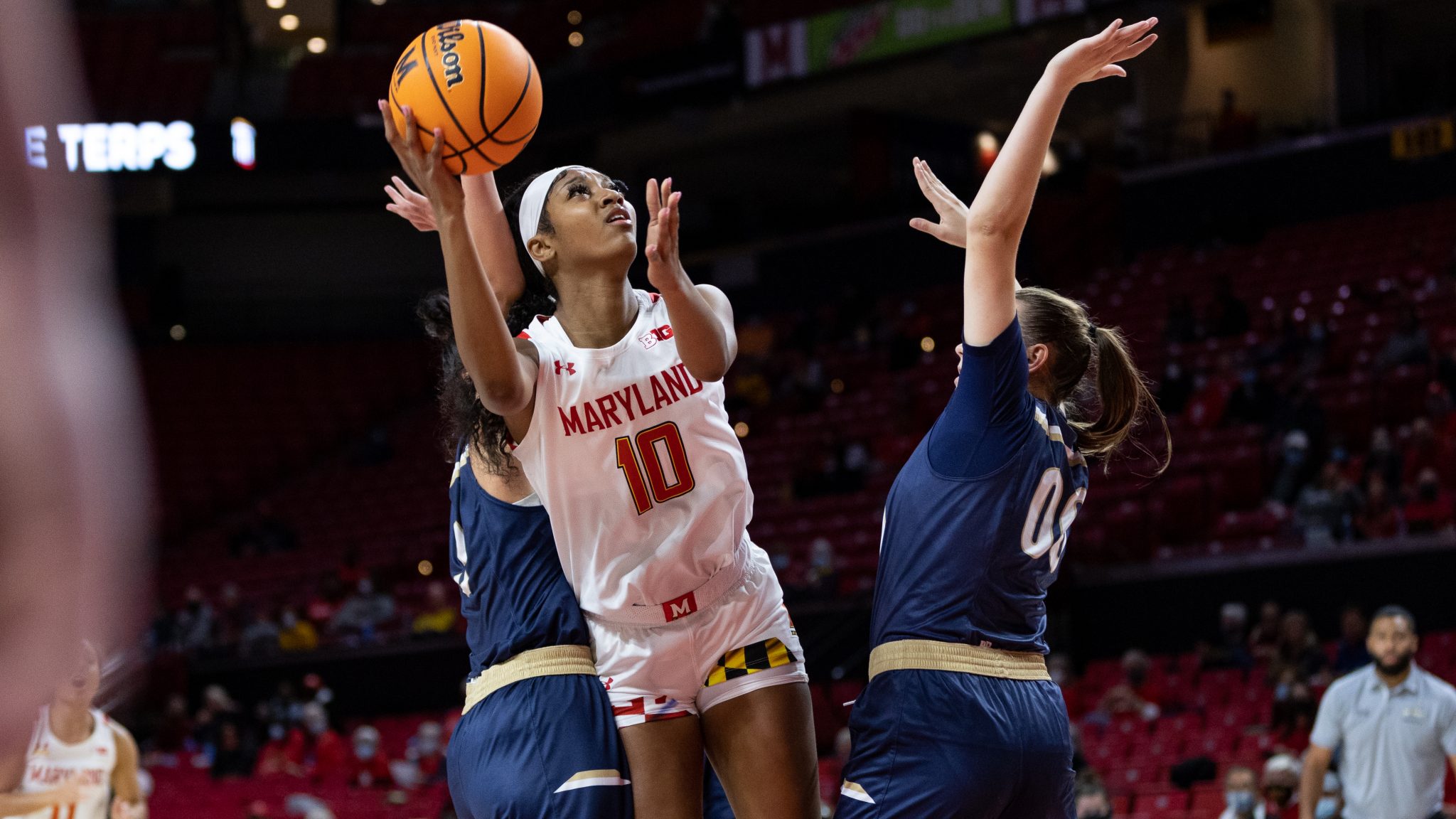 Maryland women’s basketball had tallied six steals before Katie Benzan made it seven at the 6:44 mark of the second quarter. She jumped the passing lane down the baseline and made several juggles to prevent the ball from falling out of bounds.

After corralling the errant pass by Kendall Bresee, Benzan threw an outlet to Ashley Owusu to kickstart yet another fast break opportunity for the Terps. As Owusu surveyed her options, Benzan trailed from behind and received the dish for an in-stride elbow three-point jumper.

The fast break was executed to perfection, just as it had been all night for Maryland. They never let Mount St. Mary’s sniff the lead, as the Terps used a plus-25 fast break scoring margin to overwhelm the Mountaineers, 98-57.

“I thought it was a pretty complete game for us,” coach Brenda Frese said. “I love how we’re sharing the basketball, our assist-to-turnover ratio. We did a phenomenal job on the glass when talking about the rebound and just continuing to try to keep improving defensively.”

Maryland’s offense was anemic in the opening few minutes, but the defense made up for it, particularly that of Mimi Collins and Chloe Bibby. They commandeered key defensive rotations down low to swarm the Mount St. Mary’s offense.

“I always want to guard the one through five,” Collins said. “I just want to stay versatile.”

The offensive pace picked up as the turnovers began to mount. The Terps had forced five giveaways and scored nine points off those chances to jump out to a 16-point advantage. This was all before the 2:13 mark, where Aryna Taylor scored the first points of the game for the Mountaineers.

Maryland’s 23-7 lead at the end of the first quarter only got larger as the Terps kept up the pace. Halfway through the second quarter, Maryland held a 17-0 fast break scoring margin.

“That’s Maryland basketball,” Benzan said. “We want to get up and running, so coach told us they couldn’t stick with us in transition and we just implemented that on the court.”

Owusu was instrumental in controlling the pace, looking comfortable as ever after turning her ankle against James Madison two days prior. After scoring a game-high 22 in the last meeting against Mount St. Mary’s, Owusu made noise once again with 16 points.

But she wasn’t alone. Collins dropped 18 points, while Angel Reese had yet another efficient performance, shooting 63.6 percent.

The Terps’ halftime lead sat at 28 points behind a whopping 61.1 percent shooting clip.

The Mountaineers hung around with Maryland in the third behind 5-of-9 shooting from deep, but the Terps’ equally impressive shooting numbers maintained the overall unevenness. Benzan and Shyanne Sellers supplied the thunder from downtown as the two went perfect from three ahead of the media timeout.

Maryland’s starting five shined once again as each scored in double figures for the second time this season. The Terps now sit at 4-0 and have a matchup against UNC Wilmington to look forward to before playing No. 6 Baylor on Sunday.