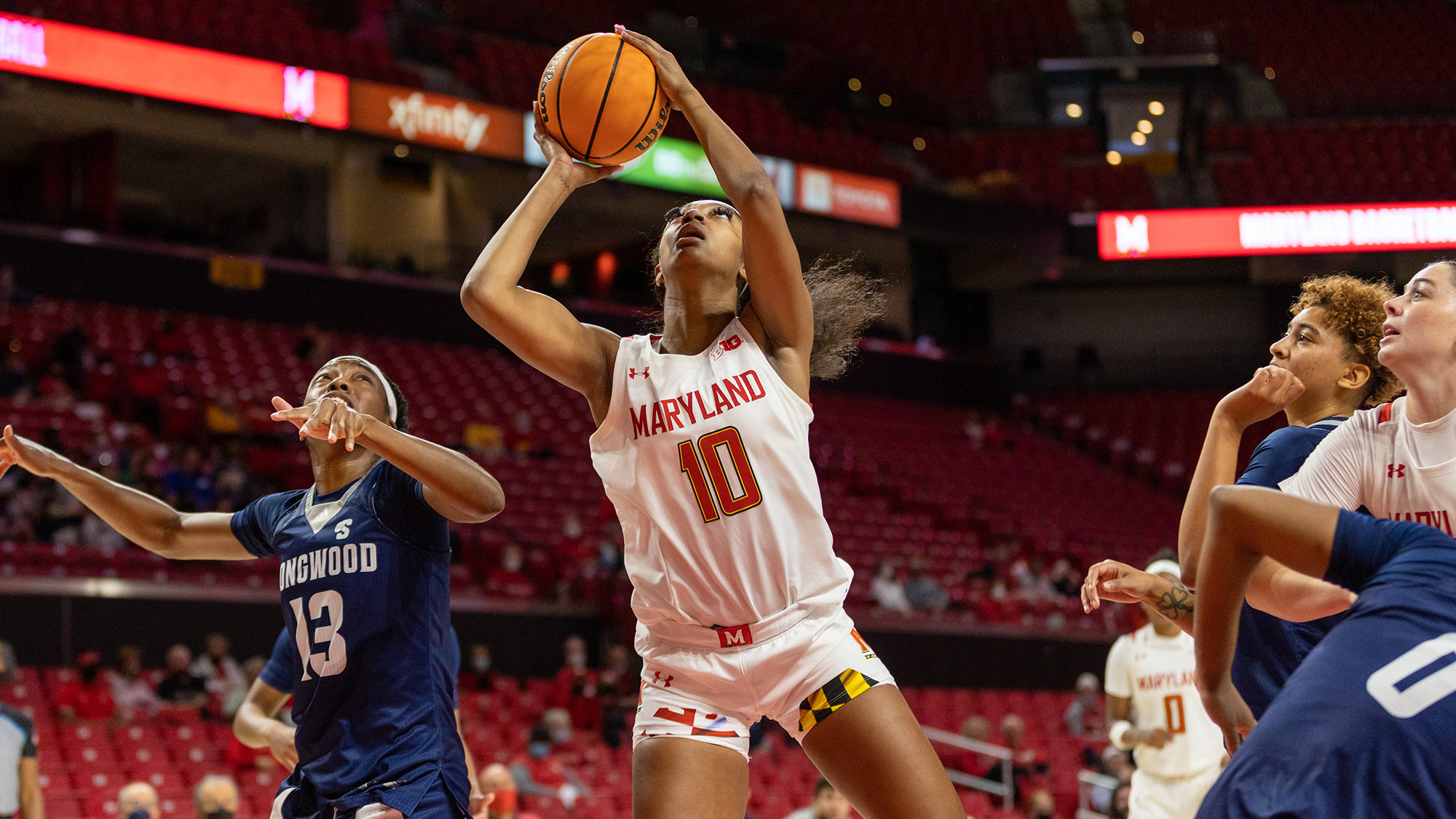 After tracking down a messy tipoff, Angel Reese dished the ball out to Katie Benzan on the wing. And for those who have watched a minute of Maryland women’s basketball, they knew what was next.

Benzan shot from beyond the arc perfectly, sinking the first Terps basket of the 2021-22 season.

A hard-fought first half left Maryland with a slight edge over Longwood, but it wasn’t a guaranteed victory.

So Benzan did it again.

One of the best three-point shooters in the country hit back-to-back daggers from deep to open up a dominant second half for the Terps that secured an opening day victory over the Lancers, 97-67.

“It looked like your first game, a lot of missed layups, some sloppiness to start,” coach Brenda Frese said. “Through the quarters I thought we got better … Our second and third quarters we were able to do some great things.”

Despite Diamond Miller sitting out as she nurses a knee injury, Maryland’s lineup was just as loaded as last season with Benzan, Reese, Ashley Owusu, Chloe Bibby and Mimi Collins forming the starting five.

It wasn’t a strong first quarter for the Terps. For a team that shot .496 last season, Maryland looked rusty at .389 at the first buzzer.

But Collins got the Terps rolling, putting up nine of the first 12 points for the defending Big Ten champions.

“The veteran leadership from Mimi to start the first quarter was spectacular,” Frese said. “She came out, put the team on her back, that’s what you’re looking for veterans to be able to do.”

She was quiet for much of the remaining half but was the only one who could seemingly provide early offense for Frese’s squad.

While Maryland was underwhelming on offense to start, Longwood was anything but.

The Lancers shot .571 in the first quarter with buckets from seven different players. The Terps seemed to lay off Longwood defensively for much of the opening period, giving ample space for the Lancers to show off their impressive shooting depth.

It took a noticeable adjustment from the team to quell the offensive outburst against them.

“We tried to speed them up,” Collins said. “We were really sloppy in the beginning, but when coach [Karen Blair] told us to get in our gaps … we got the stops that we needed.”

The second quarter brought a Maryland attack that had been expected from the first minute. Owusu owned the paint with nine points on primarily physical baskets. An undersized Longwood couldn’t do much against the Terps outside of drawing a few offensive fouls to negate scores.

Nevertheless, Maryland led 47-34 at the break, looking primed to take full control in the second half.

After Benzan sank her first two baskets, the Terps took over. With such a deep roster of athletic players, the first few minutes of the second half had Maryland burning a tired Lancers squad in transition for layups from Reese and Owusu.

With the Terps’ high-tempo offense back to last season’s pace, Maryland separated itself from Longwood in the third quarter, outscoring the Lancers, 29-13. Ten of those points belonged to freshman Shyanne Sellers, who had a strong start to her career as a Terp.

“She’s fun to play with, energy off the bench, and that’s something that we need,” Reese said. “She’s really confident as a freshman.”

Sellers missed her first three baskets but found her groove after getting her first points on a layup. She rattled off four straight in the third quarter to help Maryland pull ahead.

Longwood found its footing again to start the fourth quarter on an 11-2 run, closing the gap to 20 points. But after a two-minute scoring drought, Reese got the and-one on a layup to get the Terps offense moving again.

Reese had a sluggish start as the Maryland offense did, going 1-for-7. But as the team came back to life after the first quarter, so did she. Reese ended with a team-high 21 points and 14 rebounds.

The Terps finished the game while giving returning players like Taisiya Kozlova and Faith Masonius some time to brush off the dust from the offseason.

Any early worries that Maryland wouldn’t get back toward its average of 90.8 points per game last season were dashed as Frese’s squad provided a commanding second half for the Tuesday morning audience.

“Being a hometown girl, I’m so happy to be home and being able to play in front of my family, and this is my first time playing in front of fans,” Reese said. “I’m excited and I’m so happy for everyone coming back.”