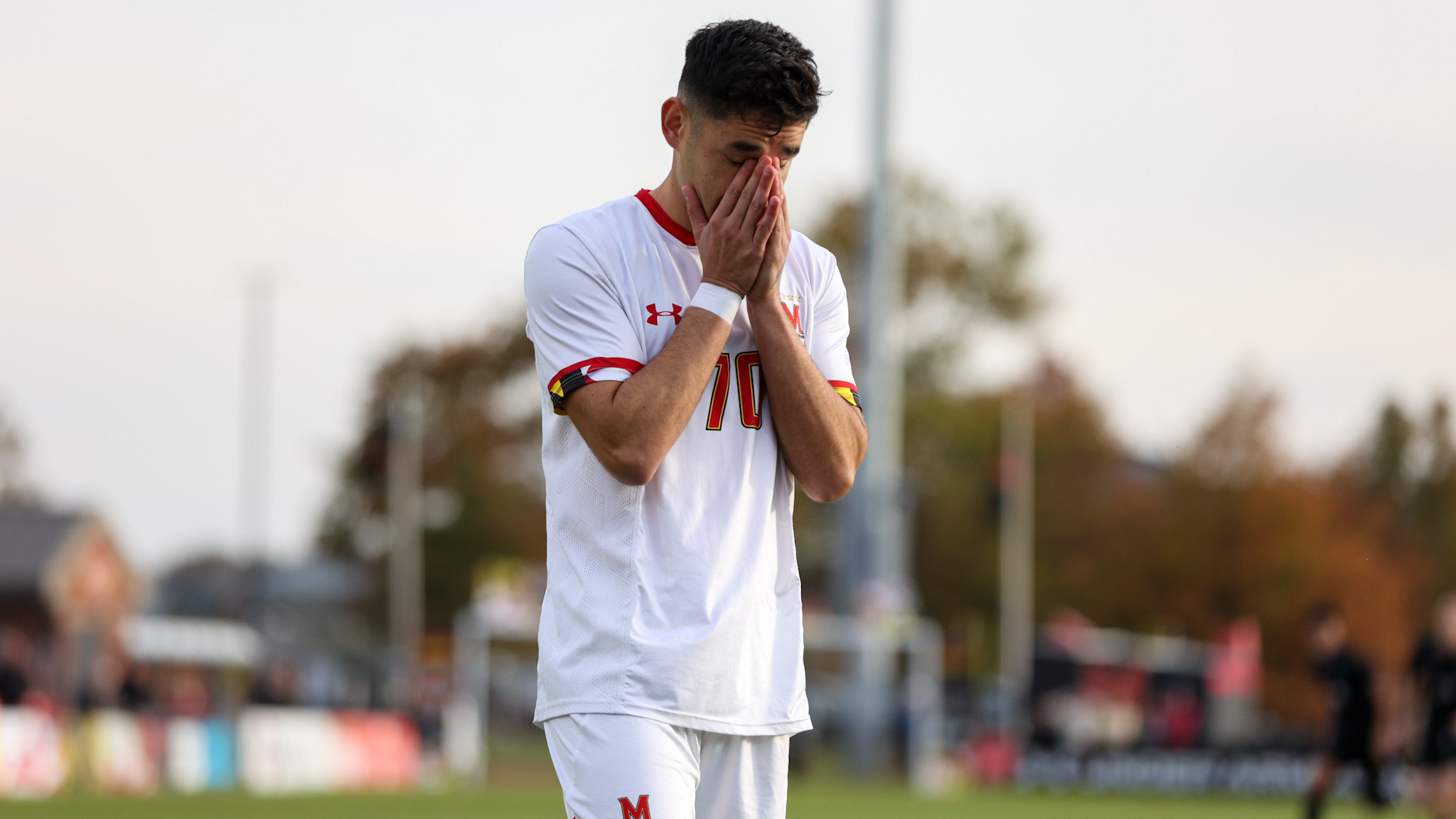 Brayan Padilla hangs his head after hitting the post on a penalty kick, leading to Northwestern's upset of Maryland men's soccer in the Big Ten quarterfinals on Nov. 7, 2021. (Cam Andrews/The Diamondback)

Player after player lined up and took their best crack at advancing their team’s ambitions to finish on top. Some cracked shots to roars, and some to complete silence.

For the Terps, the silence didn’t fall in their favor. Losing on a missed sudden-death penalty kick, Maryland dropped out of the Big Ten tournament at the hands of Northwestern.

Sprinting into the match after winning five of their last six, the Terps looked set to make some noise in the conference tournament. But Russell Payne’s Wildcats wouldn’t go away.

Maryland’s backline held steady for the much of the first half, repelling Northwestern on a few occasions to hold possession. That attack just couldn’t find the right opportunity in numerous minutes on the Wildcats’ half and lacked evasiveness to gain open shots in the right spots.

Northwestern eventually found the energy to start a formidable push, with a low chance saved by Terps goalkeeper Niklas Neumann in the 25th minute. Later, the Wildcats nearly capitalized on an open shot that needed to be stabbed out of the air by Neumann.

While Maryland dominated possession, Northwestern’s defense did enough to find chances for its offense to stay in the match. And despite a few promising attempts of their own, the Terps hadn’t done enough and went into the half scoreless.

“I thought we lost the game in the first half. We came out very flat and we allowed Northwestern to gain a lot of confidence,” Cirovski said.

The pressure only dialed up in the second half, as the possibility of a berth in the Big Ten semifinals flashed in all 22 players’ minds. But there was controversy.

A close nick by Maryland’s Caden Stafford looked to send the ball over, but he came up short. Referees reviewed the play and determined the no goal.

And the theme of the first half prevailed. The Terps had no issues retaining the ball, and the Wildcats made quality chances when they could.

Sprinkling in Maryland’s defensive tenacity and Northwestern’s unexpected offensive pushes, this game had every ingredient for a nail-biting, heart-pounding finish.

“This was a challenging game,” Cirovski said. “I knew Northwestern was going to come in with pressure and they were going to make it difficult for us. … When you play a poor first half, that allows them to feel confident.”

Facing an open chance by an idling Wildcat that looked to be waiting for his moment to pounce, Neumann showcased his range in the net yet again. Lunging and striking a hard shot at the net, Neumann sent it sailing over and out of danger. The goalkeeper kept the Terps alive on numerous occasions with outstretched saves.

“Niklas, I thought had a wonderful performance. Made some good saves in the game and what you save two penalty kicks, you should win,” Cirovski said.

Northwestern goalkeeper Miha Miskovic looked to shadow Neumann as well, as he came back with lightning-quick save on a quality chance by Jacen Russell-Rowe. To pair with that decisive save, Miskovic managed consecutive blocks as Maryland furiously closed on goal.

And Miskovic’s efforts were enough. With both teams stonewalled by stellar goalkeeping, the playoff pressure came to an ever higher boil as Ludwig Field played host to overtime.

“Game should have never went to a penalty shootout,” Neumann said. “Struggled a little bit in the first half but then came out way better in the second half, had a lot of chances even through the overtime period.”

The extra period added to the drama as both goalkeepers racked up additional saves to keep the match without a winner. That was with the play staying at its familiar energetic pace, each side bumping and fighting for possession to the final whistle.

“I think it starts from everyone, it’s not really if you’re just a senior or a junior. I think that’s the biggest message we’ll try to send to them,” Chris Rindov said. “This isn’t still your freshman season, this is your second season. This is where the big moments are played and everyone that comes here is more than capable of doing that.”

Neither team relented, and after 110 minutes of building suspense, penalty kicks were needed to decide the winner.

The stakes were high, and it came down to both teams tied after four kicks. The Wildcats’ Rom Brown made the fifth, and Brayan Padilla’s shot fatefully rolled off the post.

The Terps lost in dramatic fashion and now have time to think about their ambitions before the NCAA tournament.

“The main point is to focus on getting ourselves physically and mentally to a good place,” Cirovski said. “We’ll take this week to get ourselves ready and then we have three days to prepare for out opponent at that point in time.”