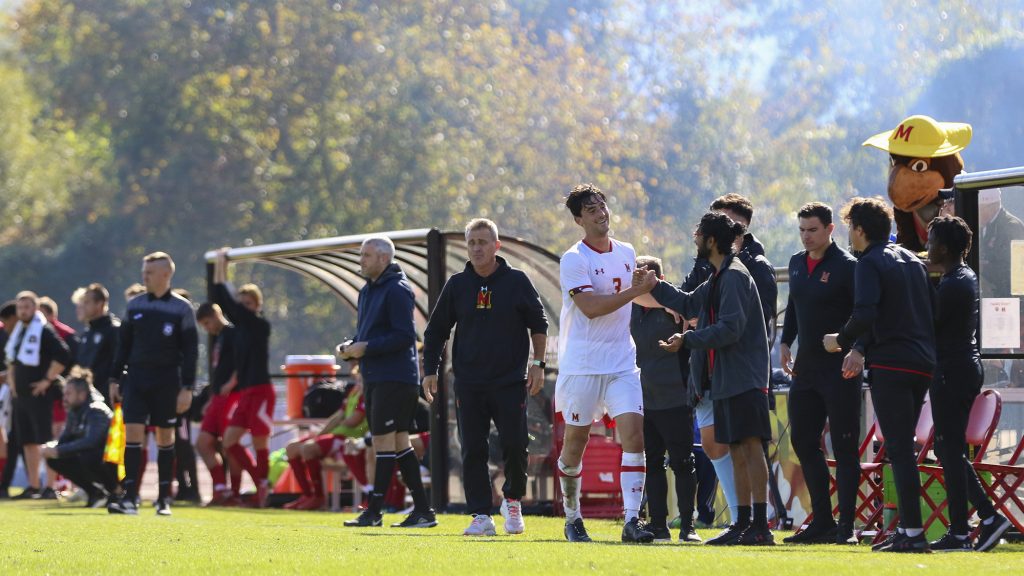 Forty-five minutes into their match against Indiana, the team sought to find an edge on the Hoosiers. Indiana looked like the better team — it looked to score on a pair of occasions that required talented defensive intervention to prevent.

“I thought in the first half we weren’t as dangerous as maybe we could have [been], even though I think we played quite well,” coach Sasho Cirovski said.

After being outshot 6-3 in the first half, Maryland needed a spark to overcome the Hoosiers.

And if Ryan Blumberg’s first start had poured gasoline all over their offense, his goal was the match that ignited it. Maryland’s offense exploded, and it looked like a totally different team in the final half.

With their aggression shining through, the Terps took 14 second-half shots which required a spectacular effort from Indiana’s goalkeeper, who made seven saves in the same period. Ben Bender’s goal in the 55th minute, his seventh of the season, iced the game and capped off a decidedly emotional performance.

Driven by more than just the extra spunk Cirovski may have put into the team’s step after halftime, Maryland men’s soccer needed Blumberg.

Blumberg needed them, and their bond drove the Terps home.

“I’m just so proud for him,” Nick Richardson said, his voice shaking with emotion. “It shows all the hard work does pay off … I think everybody here is really proud for him.”

The inspiration provided by a teammate who had committed to Maryland six years ago and only found his first start that day, proved to be undeniably strong. Whether the Terps would’ve recovered the way they did without the power of the circumstances revolving Blumberg’s play is unknown.

But, so it went, and as it remains irrefutably perfect.

“I always felt like I could bring quality to this team,” Blumberg said. “For it to happen today was special and something I’ll remember forever.”

And the redshirt junior was eventually substituted out in the second half, exhausted, but surrounded by the emotion of his teammates and a cheering crowd. Blumberg had helped the Terps claim the No. 2 seed in the Big Ten Tournament and the right to be at home for just a bit longer.

The Terps will face Northwestern on Nov. 7 at Ludwig Field in the Big Ten men’s soccer tournament quarterfinals. If they win, they will face the winner of Indiana-Rutgers, and play a potential rematch against the Hoosiers.

“It’s an amazing story. It’s one that should be inspirational to every Division I soccer athlete, to not quit and not give up,” Cirovski said. “But it’s also about the program not giving up on him either.”

Teammates had mentioned Blumberg on a few occasions across the year, and they beamed after the Northwestern game after seeing Blumberg got a few minutes on the field. With Blumberg’s goal, all that emotion finally came to the forefront.

And Maryland used it to crush the Hoosiers.