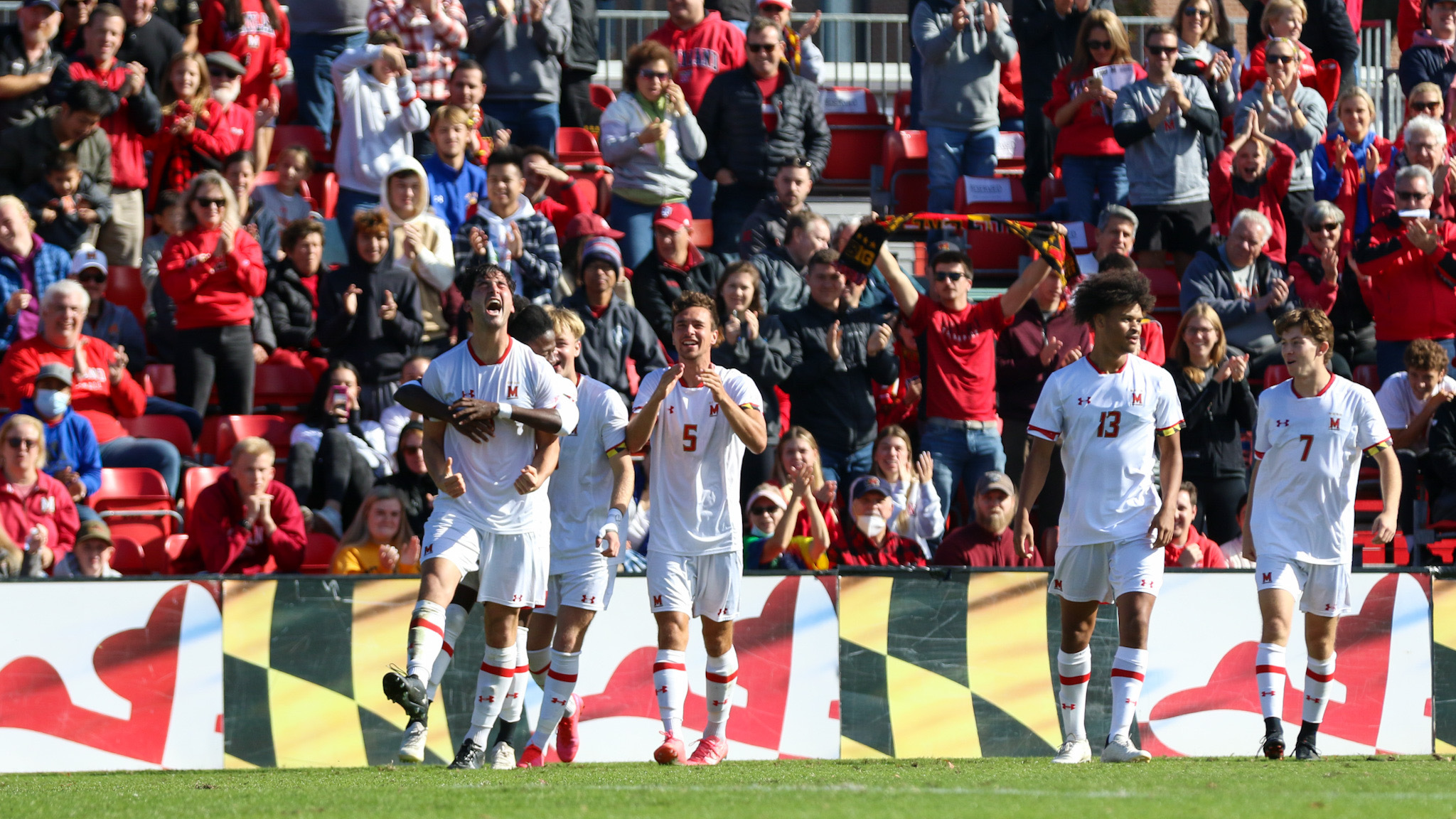 Ryan Blumberg celebrates his first career goal with his teammates in Maryland's 2-0 win over Indiana on Oct. 31, 2021. (Cam Andrews/The Diamondback)

One Maryland men’s soccer player screamed and sobbed his way through his teammates, wiping away a mix of joyous tears and sweat. That player toiled through challenge after challenge through three seasons of his career, dealing with injuries over and over.

His career playing time amounted to a total of 20 minutes before he started on his senior day, in a game that couldn’t matter more. A tumultuous and unfortunate career of a beloved teammate looked to come to its regular season conclusion.

As cheers erupted and likely dreams came to fruition, something was apparent.

Ryan Blumberg made every moment count.

Propelled by Blumberg’s emotional 49th-minute header, the Terps rolled in the second half to claim victory and the No. 2 spot in the Big Ten, 2-0.

“It was truly surreal,” Blumberg said. “It was a crazy experience for me to even start the game … I didn’t think I was gonna play again, to be honest. … It was just a amazing feeling [to score] and I can only truly be grateful and thankful for my teammates for continuing to support me.”

And the stakes were gigantic. Splashed against the background of senior day, Maryland needed a win plus a Penn State loss against Wisconsin to claim the outright Big Ten regular season title and the top seed in the conference tournament.

Indiana presented a formidable challenge in what felt like a de-facto conference championship game. A victory seemed the perfect way to honor the Terps’ seniors, including Blumberg, and give the team an easier cruise through the Big Ten tournament.

Neither team looked to go out easy. Heavy skirmishing highlighted the first few minutes of the match, as both sides tested the water. Both squads had promising individual chances as well, with one Hoosiers’ attempt requiring Niklas Neumann to block a hard one-on-one shot from close range.

“I told our guys that we played a good half, but we were a little careless with the ball in the midfield,” coach Sasho Cirovski said. “We took some unnecessary risks, we gave them two or three breakaway looks in that half.”

Maryland nearly had one as well, as Joshua Bolma broke away and fed Ben Bender for an open shot that rolled just wide of the open half of the net. But despite the promising chance, Indiana took over the next segment of the game.

Several advances by the Hoosiers required the Terps to wall up near their goal, including one that saw Chris Rindov save a sure goal with his leg as his body hit the turf.

Rindov was furious at an offsides non-call as an Indiana player looked to have committed the foul on their advance to the goal. It seems his anger might’ve been caused by a half that saw Maryland cede more ground than it would need to win.

The submissive first half didn’t help the Terps in their quest to come out as victors, and the Hoosiers hoped to carry their momentum into the second half.

But as it turned out, the period meant so much more than that.

The long corner sailed and flattened out at head level for Maryland’s strikers, looking to make contact. Blumberg was at the right place at the right time.

Sailing above the rest at the front of the line, Blumberg snuck a header behind goalie Roman Celentano and locked in the Terps’ first lead in dramatic fashion.

“For [Blumberg] to get a goal in the fashion that he did and to see him emote on the field with tears, I think it was the stuff dreams are made of,” Cirovski said.

And that was that. If Blumberg’s strike couldn’t motivate Maryland to top Indiana, nothing would. Bender added another exclamation point in the 55th minute, and the match already looked as if it had come to an end.

“I think [Blumberg’s goal] was the commemorative moment of the season so far,” Nick Richardson said. “It really proves that we have the depth and the belief within the team.”

With a strong closing performance by the Terps backline, it did. Maryland claimed victory and will host a Big Ten quarterfinal next week.

“Like we tell all of our players, you don’t know when your moment will come, be ready for it,” Cirovski said. “Today, [Blumberg’s] moment came. He was ready for it.”