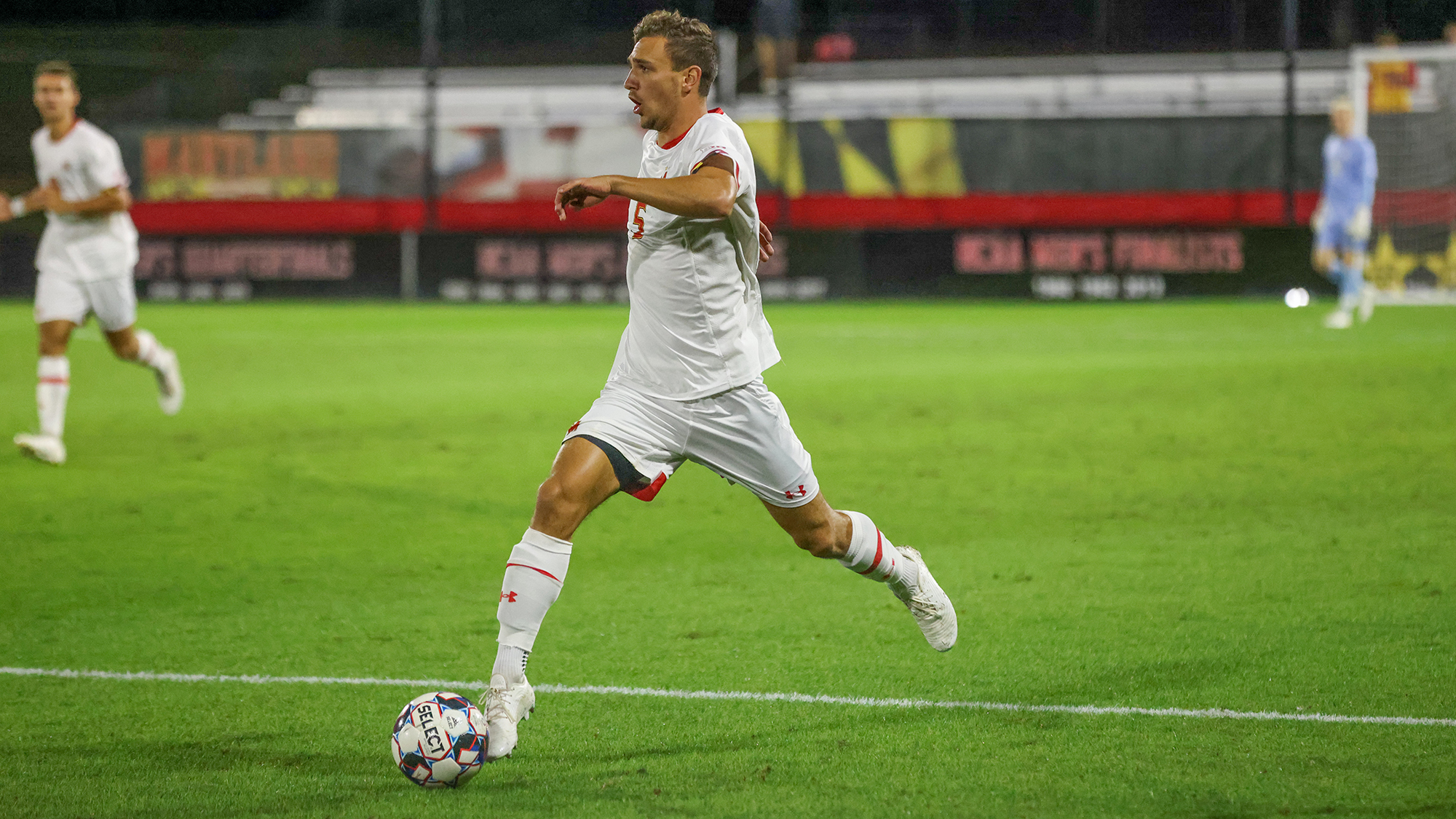 One brilliant play after the other, Maryland men’s soccer established a strong precedent in its match against Penn State. A 2-0 lead resulted, and the Terps’ confidence was sky-high in their quest to claim the top spot in the Big Ten.

Then, the Nittany Lions found whatever they had been missing. One late goal in the first half carried into another to force overtime, into the final fatal blow.

A deflected ball off a Penn State free-kick sealed the deal as Maryland couldn’t find the room to stop the burgeoning Nittany Lions.

“We battled hard against a very motivated and hungry Penn State team coming off of three difficult losses and just wasn’t enough,” coach Sasho Cirovski said. “I was proud of the effort, disappointed in the way the game ended.”

Faced with their most important matchup of the season, the Terps had a choice: win and set up a showdown for the No. 1 spot in the Big Ten next week; or lose and see their top seed chances dwindle away.

Early on, the first choice went off to a roaring start.

Setting the tone early, Caden Stafford took a pass from Joshua Bolma with some room for a potentially dangerous shot. But Stafford didn’t take the ball. He let it roll by as he lifted his foot.

[Maryland men’s soccer has two rivals in its way of the No. 1 seed in Big Ten tournament]

The forward likely knew who was coming. Screaming in from behind Stafford, Ben Bender launched a cross to the left corner that landed in the 11th minute. The lately-spectacular sophomore landed yet another goal in his current streak of four straight games with a mark.

“Ben is playing at an extremely high level,” Cirovski said. “He’s getting into good spots to score goals for us.”

Maryland continued to pressure the Nittany Lions’ backline with shots in the next few minutes until Penn State finally got involved in the action, forcing a save from goalkeeper Niklas Neumann in the 25th minute.

But the theatrics just kept coming from the Terps.

Stafford intercepted a Nittany Lions’ pass and broke away into the clear with a pair of defenders and goalkeeper Kris Shakes in sight. Faking out each defender, Stafford lifted his shot right over a slide tackle into Shakes’ legs. And just as the rest of the day had gone for Stafford, the ball took the right roll.

Squeezing past Shakes, the ball rolled into the right side of the net for Maryland as Stafford danced his way to the right corner of the pitch. The freshman striker had been all over the field, and the Terps capitalized.

“Caden is starting to round into form. He’s been involved in a few goals recently,” Cirovski said. “It’s just a matter of him continuing his form right now.”

Not to be outdone for the whole half, Penn State fired back with an answer that squeezed by a crowd of Maryland players into the upper-left corner of the goal. That kept it close going into the closing minutes of the half, with both sides’ playoff dreams ringing out on the field.

As the second half dawned, the Terps and Nittany Lions continued to battle. Outside of an early Bender chance that was saved, Penn State regained the role of the aggressor.

“The fatigue from the Michigan State game really got us in the second half,” Cirovski said.

Launching several shots that came closer and closer to netting as the half went on, the Nittany Lions found the net on a long-crossing pass that Seth Kuhn buried in the right corner. Neumann didn’t have much of a chance to defend it, as Penn State attacked his net fiercely in the half.

“What we didn’t do well is in moments of possession, counterattacking, we didn’t take advantage of those moments,” Cirovski said. “I think that’s where the fatigue of some of the young players really showed in the second half.”

And Maryland had no answer. The Nittany Lions carried their momentum cleanly through the end of the first half, outshooting the Terps by a substantial 11-2 margin in the second. Normally strong-finishing Maryland was left to find an answer in overtime.

The Terps wouldn’t find it.

Penn State, carrying that strong boost after a lackluster start, netted off a deflected free kick in the fourth minute of overtime. Maryland, despite an early 2-0 lead, would travel back to College Park empty off the 3-2 loss.

“It’s a huge game on Sunday [against Indiana],” Cirovski said. “Not only is it a huge rivalry, but in our mind, we still feel like we have a shot at winning the Big Ten championship.”