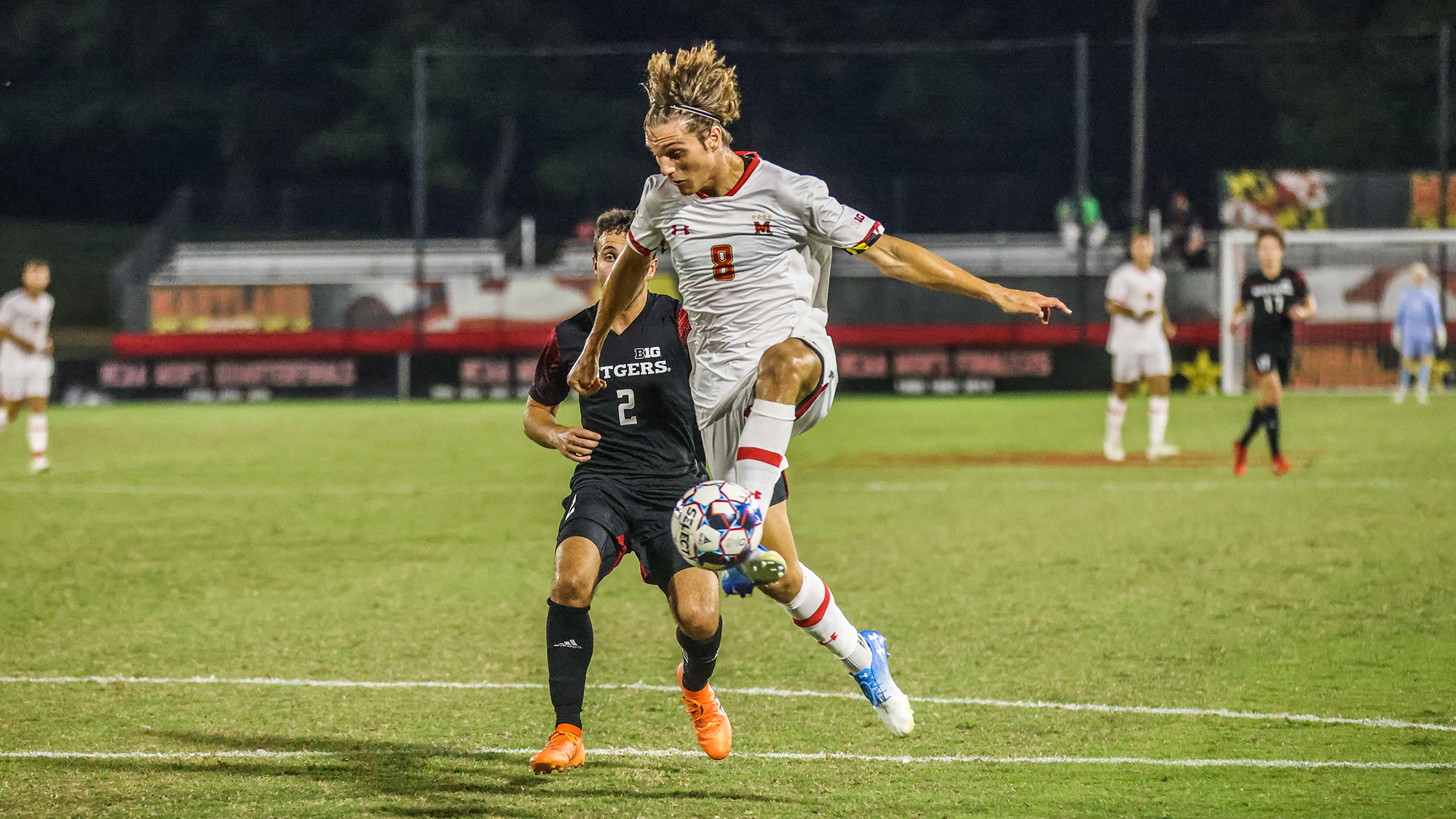 Jacen Russell-Rowe picked up his dribble in Michigan State’s half and quickly split two defenders, bursting his way into the box.

The forward looked up and squared the ball to Ben Bender, who’s first-time finish put the finishing touches on a 3-1 win for Maryland men’s soccer over the Spartans.

As the midfielder celebrated, he put up two fingers, sending love to his teammate. Malcolm Johnston, who sports number 11 for the Terps, suffered a head injury earlier in the match.

The win boosted Maryland to the top of the Big Ten standings, as they were able to take advantage of Penn State’s slip up in a 2-1 loss at Ohio State.

Coach Sasho Cirovski’s squad got off to a perfect start as Brayan Padilla’s effort from long range skipped in front of Spartans’ goalkeeper Lance McGrane and bounced in the back of the net.

“[The goal] definitely helped,” Padilla said. “Even though I scored it I feel like it helped all the forwards, because that’s what Sasho has been asking from us, to just get to go early,  get a goal in the first half, and for me it definitely felt great.”

Maryland controlled most of the play as the opening half went on, but weren’t able to find the final ball as they failed to get another shot on target for almost 40 minutes.

All play was halted in the 34th minute after Johnston suffered his brutal injury. Farai Mutatu attempted a bicycle kick that connected with the head of the Terps’ midfielder.

The game was stopped for about 25 minutes until Johnston was carted off of the field, moving his extremities and giving a thumbs up on the way out.

“It’s always tough seeing one of your captains, one of your brothers, go down with such a horrific injury, especially to the head,” Brett St. Martin said.

Caden Stafford recovered the ball for the Terps in midfield in the 41st minute before driving at goal, putting a defender on the ground before playing a sumptuous through ball into Josh Bolma.

Bolma made no mistake with the finish, calmly slotting his first-time strike into the bottom corner to double Maryland’s lead.

“It feels amazing getting back on the score sheet,” Bolma said on BTN+ after the match. “I’m glad I was able to get one tonight and also credit to Caden, he had a good play, played me through and all I had to do was finish it.”

The goals came from the Terps’ only two shots on target in the first half, and they were able to take a comfortable 2-0 lead into halftime.

But, Maryland wouldn’t be comfortable for long, as the Terps fell on the wrong side of a strong start from Michigan State early in the second half.

The Spartans’ Zach Babiak received the ball inside the box and unleashed a strike that went off the bottom of the crossbar before bouncing beyond the line, cutting Maryland’s lead to one just 61 seconds into the second half.

Babiak almost notched a brace in the 57th minute, but missed a golden chance to tie the match for Michigan State on a first-time strike from inside the goal box. But the shot waned wide of the net goal.

[Maryland men’s soccer had an offensive breakthrough against Pacific]

The Spartans had another chance to tie the game up in the 61st minute when Michael Miller got in behind the Terp’s defense. The midfielder tried to chip Niklas Neumann, but the keeper made a well-timed initial save, and the rebounded shot went wide.

“It’s very much a mental battle for us,” St. Martin said. “We kind of lost some energy at halftime, just because things kind of settled in for us and we kind of thought ‘Is he okay, like is something wrong?’”

Bender’s goal in the 66th minute restored Maryland’s two goal lead, stunting Michigan State who had dominated the first 20 minutes of the second half.

The Terps were able to control the remainder of the match, seeing off the Spartans on their way to a 3-1 win. Padilla was happy with the way Maryland was able to respond to adversity.

“We just had to put the best effort we could for [Johnston] and for the team,” he said. “And I think we did it, we always kept the foot on the accelerator and we just kept going.”

Michigan State outshot Maryland 13-10, but the Terps were able to create more quality chances as it outplayed the Spartans for the majority of the match.

“I thought it was a comprehensive, total team effort,” Cirovski said. “Overall, very pleased with the effort against a very good Michigan State team.”

Now atop of the Big Ten, Maryland enters its crucial last two conference matches against Penn State and Indiana.

The Terps couldn’t be more motivated to face two massive Big Ten rivals, as the matches will have huge implications for the Big Ten Championship and home field advantage in the Big Ten tournament.

“​​At the end of the day you come to Maryland to win championships, and that’s what we want to do,” St. Martin said.