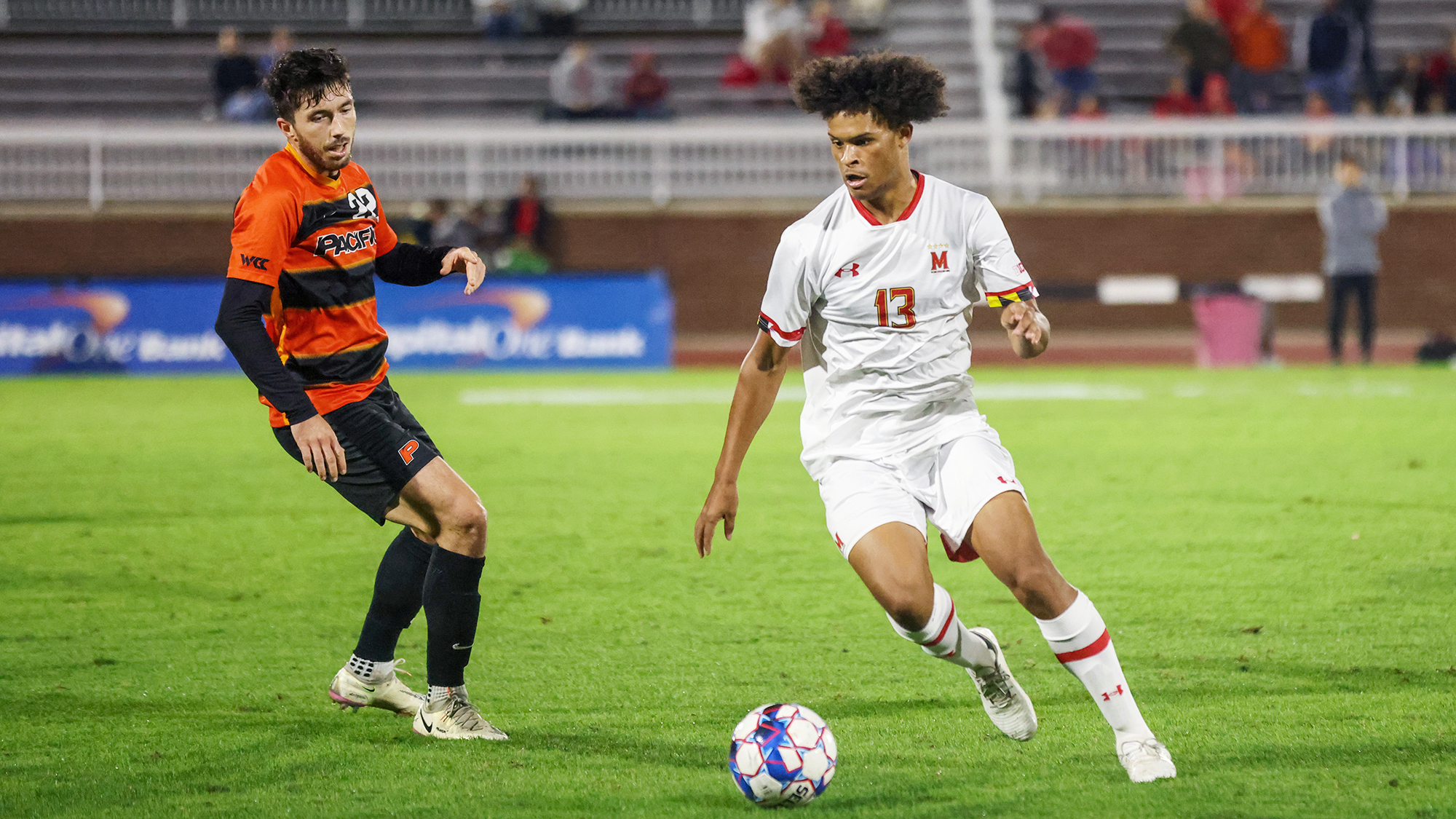 Maryland’s Jacen Russell-Rowe dribbles around a Pacific defender during the Terps’ 3-0 win over the Tigers on Oct. 16, 2021. (Collin Riviello/The Diamondback)

As the night creeps more into day, the wind turns frigid and the play turns more competitive, Maryland men’s soccer finds itself in the final stretch of its regular season.

Three games may define the rest of the Terps’ campaign and will heavily influence Maryland’s first steps into the postseason. The next 10 days will answer whether the Terps will stay at Ludwig Field for the Big Ten tournament or toil on the road.

The clustered conference features a logjam in the standings, with five teams likely having a legitimate chance to claim the number one seed in the tournament.

“Every game is a dogfight,” coach Sasho Cirovski said. “On any given day, anybody can beat anybody, and I still think [0-5] Ohio State is a very good team.”

[Maryland men’s soccer had an offensive breakthrough against Pacific]

With a crucial playoff race in the background, Maryland will take its first step on that road against an underrated Michigan State team. Despite a mediocre 6-6-2 record, the Spartans rank third in the Big Ten in RPI and own a win against Notre Dame, the No. 10 RPI team in the country.

“There’s no danger of us underestimating Michigan State,” Cirovski said. “We have way too much respect for them.”

Forward Farai Mutatu has scored six of his team’s 18 goals this season and owns a 26 percent share of the shots. Three of his six goals came against the Fighting Irish to help him earn Big Ten Offensive Player of the Week.

“[Mutatu] is the leading scorer in the Big Ten, and that’s obviously eye-catching and something we have to keep in mind,” goalkeeper Niklas Neumann said. “I think it’s important that we show every player the proper respect that they deserve.”

Stopping Mutatu should be an easier task with Maryland coming off six days of needed rest, with a few players such as defender Nick Richardson and midfielder Malcolm Johnston ailing.

The Terps will likely have to take a difficult three-game schedule to end the season as their most important yet.

Michigan State, Penn State and Indiana — those are the final formidable opponents Maryland must conquer to earn a better chance at a Big Ten title.

Game by game, its destiny will unfold.

“It’s important that we don’t put too much pressure on ourselves and look from game to game,” defender Alex Nitzl said. “We’re all ready, and now we’re all focused on Michigan State.”