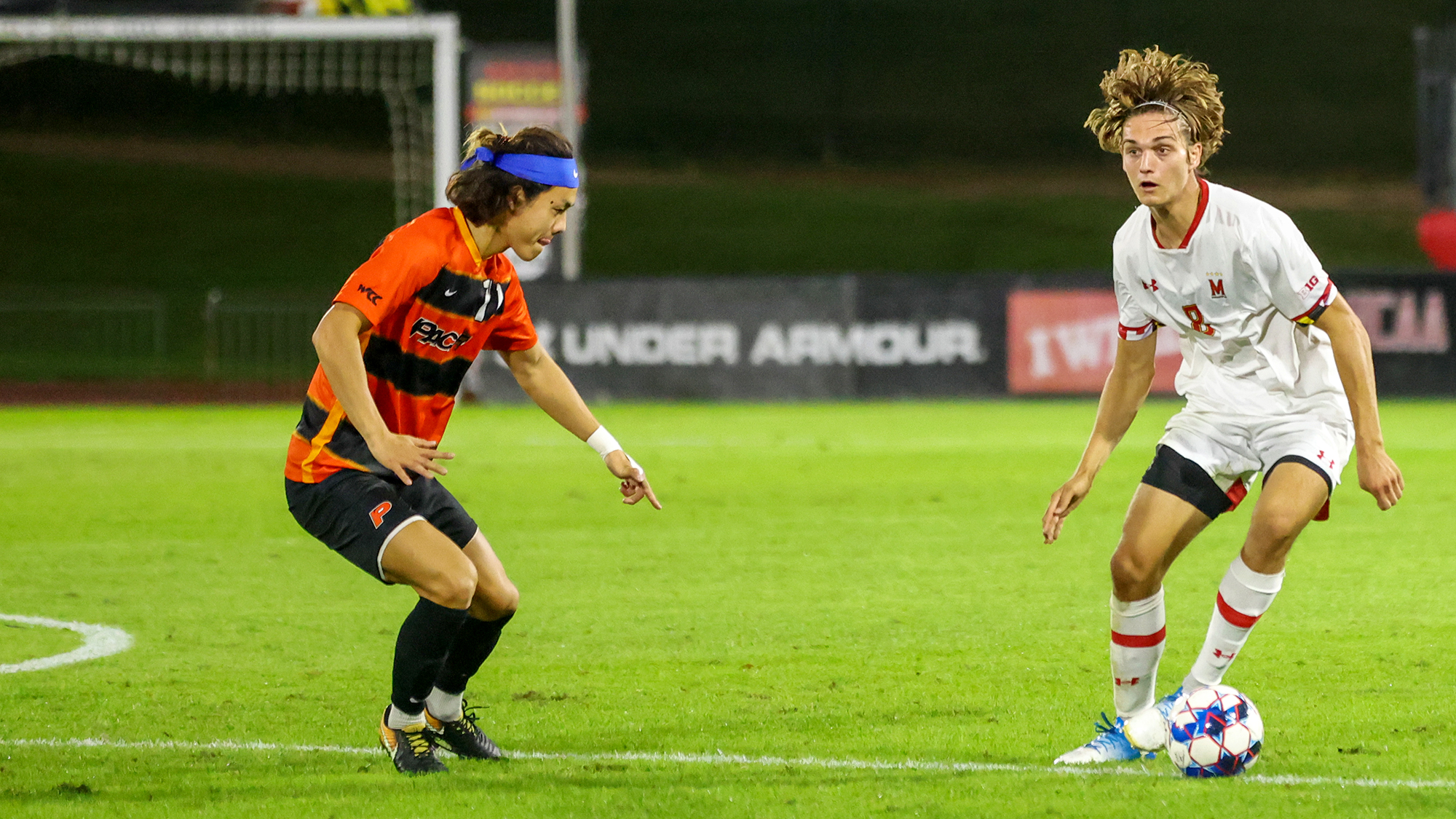 Maryland’s Ben Bender dribbles around a Pacific defender during the Terps’ 3-0 win over the Tigers on Oct. 16, 2021. (Collin Riviello/The Diamondback)

With two exponentially crucial games coming up, Maryland men’s soccer has a clear-cut chance to capture the number one seed in the Big Ten tournament.

But rival Penn State faces the same predicament and the same potential reward. And the long-time rival will likely try to ruin the Terps’ chances for a smooth postseason.

And if that challenge wasn’t enough, the injury to veteran midfielder Malcolm Johnston in Friday’s game against the Spartans remains another obstacle for coach Sasho Cirovski’s squad. But this red-hot Maryland team looks more than apt for all challengers at the moment after outscoring teams 10-2 in their last four matches.

The Terps’ win against Michigan State also proved something they struggled to show all season: their ability to capture a victory against a quality opponent on the road.

“With two difficult road games in your final three — being at Michigan State and at Penn State — that’s a hefty challenge,” Cirovski said. “It was very important to get the three points under our belt and build some momentum going into a very difficult challenge at Penn State.”

It’s possible Maryland’s best performance is yet to come with a group that continues to raise the bar. Ben Bender has stood out in a young group of impact players that have flourished for the Terps. The first fall season for the sophomore has treated Bender well —  he has netted in each of the last three games.

Bender, Joshua Bolma, William Kulvik, Caden Stafford and Jacen Russell-Rowe are a bright, young group of players that Maryland hopes will help lead them into the postseason.

That group will have to dominate the Nittany Lions as they did to Michigan State if they hope to set up a dramatic finish versus Indiana at home.

“We always want to highlight these two games on our schedule as we want to beat Penn State as a local rival in the Big Ten,” defender Brett St. Martin said. “Indiana is our biggest rival in the Big Ten because our two programs are usually the strongest every single year.”

Maryland has the advantage of positive momentum over the Nittany Lions. Penn State is in the midst of a three-game skid and is currently coming off a 2-1 loss against conference bottom-feeder Ohio State.

The Terps will have to contend with the third-ranked scoring offense in the Big Ten Tuesday, and will narrow their focus on the Nittany Lions’ top three scoring players, who have accounted for 15 of their 22 goals this season.

From what we’ve seen this season, Maryland soccer is a difficult brand to live up to. For the past few games, the Terps have embodied it. And for the next two, they’ll have to do the same if they want to keep their title hopes in better shape.

“I feel like since the past two games, we just started clicking everywhere,” forward Brayan Padilla said. “From the back, all the way to the forwards, I think we’ve started to play more as a team and you can see it’s the Maryland soccer we should be playing.”