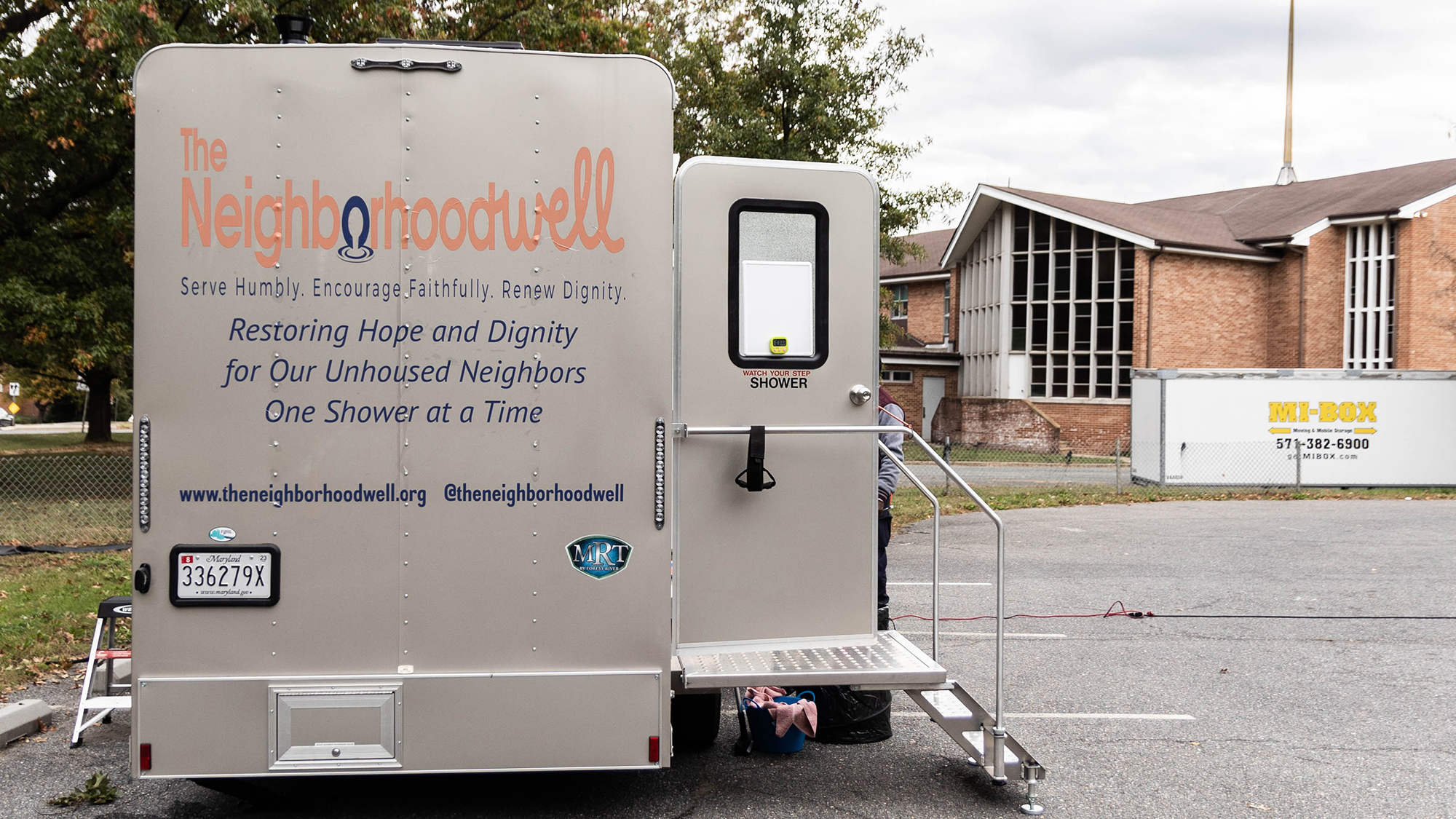 The Neighborhood Well's mobile shower outside of the First United Methodist Church of Hyattsville on Oct. 23, 2021. (Julia Nikhinson/The Diamondback)

Omolayo Adebayo founded The Neighborhood Well in 2017 after having a dream about a mobile shower that would be a resource for the homeless community. Four years later, she has made that vision a reality.

“What we want to do is just provide an opportunity for our neighbors to get clean in a comfortable space,” Adebayo said.

The First United Methodist Church will host the shower for its first six months, then it will be moved periodically to different locations around Prince George’s County.

The Neighborhood Well isn’t the only group in Prince George’s County working with unhoused and housing-insecure residents. It is just one part of a wider network of churches, nonprofits and religious organizations that work together on several different initiatives.

For the past four years, Adebayo and her team have been working in and around Prince George’s County, distributing “blessing bags,” filled with hygiene products as well as seasonal items such as hats and scarves. Adebayo’s team passed out bags in Franklin Square Park in Washington, D.C., as well as various tent encampments. They also partnered with Community Crisis Services in initiatives such as the Warm Nights Program.

“Literally anywhere where our unhoused neighbors were is where we would try to serve,” Adebayo said.

The Day Center, directed by Donny Phillips and hosted at the University Christian Church in Hyattsville, has been providing services to the homeless community since 2016. It consists of 10 congregations, including the Hyattsville Mennonite Church.

Every Tuesday and Thursday, the Day Center seeks to offer the “missing ingredients” many people experiencing homelessness need, including shelter, showers, laundry, computers, charging stations and more. Though it has been distributing bagged lunches because of the pandemic, the center began serving its signature hot meals again on Tuesday.

The program receives food and donations from College Park’s Nando’s and Franklin’s Brewery on Route 1. However, their main partner for hot meals has been the University of Maryland dining halls.

“I’m not even sure how it came about,” said Cindy Lapp, lead pastor at Hyattsville Mennonite Church. “I don’t know what the connection was, but somehow we were able to get [Maryland’s] leftover food for the Day Center, and then serve that to folks.”

Though the university is not currently providing food to the Day Center due to COVID-19, organizers hope to reestablish this partnership in 2022. Until then, congregations and community groups will be working to provide meals to their patrons.

Beyond day-to-day necessities, the Day Center also provides a social space for unhoused and housing-insecure people.

“Originally, we wanted a low barrier place where people could get a meal [and] a place to socialize,” Phillips said.

Lapp also recognizes the importance of community at the center.

“The Day Center has been … a really great place for people who can sometimes feel really marginalized … to gather and build some community,” she said. “That’s really an amazing thing.”

The opening of The Neighborhood Well mobile shower last month was the culmination of years of work, but Adebayo plans to expand the reach of the program and partner with other organizations that can provide on-site health screenings, job assistance and housing services.

The Day Center and The Neighborhood Well are just two examples of a larger community of religious nonprofits and church organizations. Dozens of these groups are linked by their service efforts to the homeless community in a tight-knit system of cooperation that goes back decades.

“A lot of the congregations have been involved with … helping [the] homeless and marginalized for the last 30-plus years,” Phillips said.

The Neighborhood Well, University Christian and Hyattsville Mennonite have not worked together but are connected through the Community Crisis Services Inc., or CCSI.

Originally founded in 1970 as a crisis hotline, CCSI has been a key partner for many of these groups through the Warm Nights Program. Though it is now hosted by a local hotel, the program operated for years through county churches, which offered overnight shelter for unhoused people and families during the winter months.

[As Nyumburu celebrates its 50th anniversary, it remains a ‘home away from home’]

Adebayo, Lapp and Phillips have all worked with Warm Nights and around 60 total churches throughout the county were involved.

According to Lapp, her congregation was enthusiastic about doing its part in this program. However, she noted that moving “from church basement to church basement” was far from a perfect solution for unhoused individuals and families.

“It made the congregation happy to be able to do something tangible, that was helpful for people that really needed help, but it was not ideal for the families,” she said.

The work done by organizations and initiatives such as Warm Nights, The Neighborhood Well and the Day Center aims to help their communities, but some say there is still a long way to go in confronting homelessness and housing inequality. Lapp sees their work as a “Band-Aid” for larger, structural issues.

“The system is broken, so I think we’ve got to find ways to help the people that need help,” she said.