As Nyumburu celebrates its 50th anniversary, it remains a ‘home away from home’ 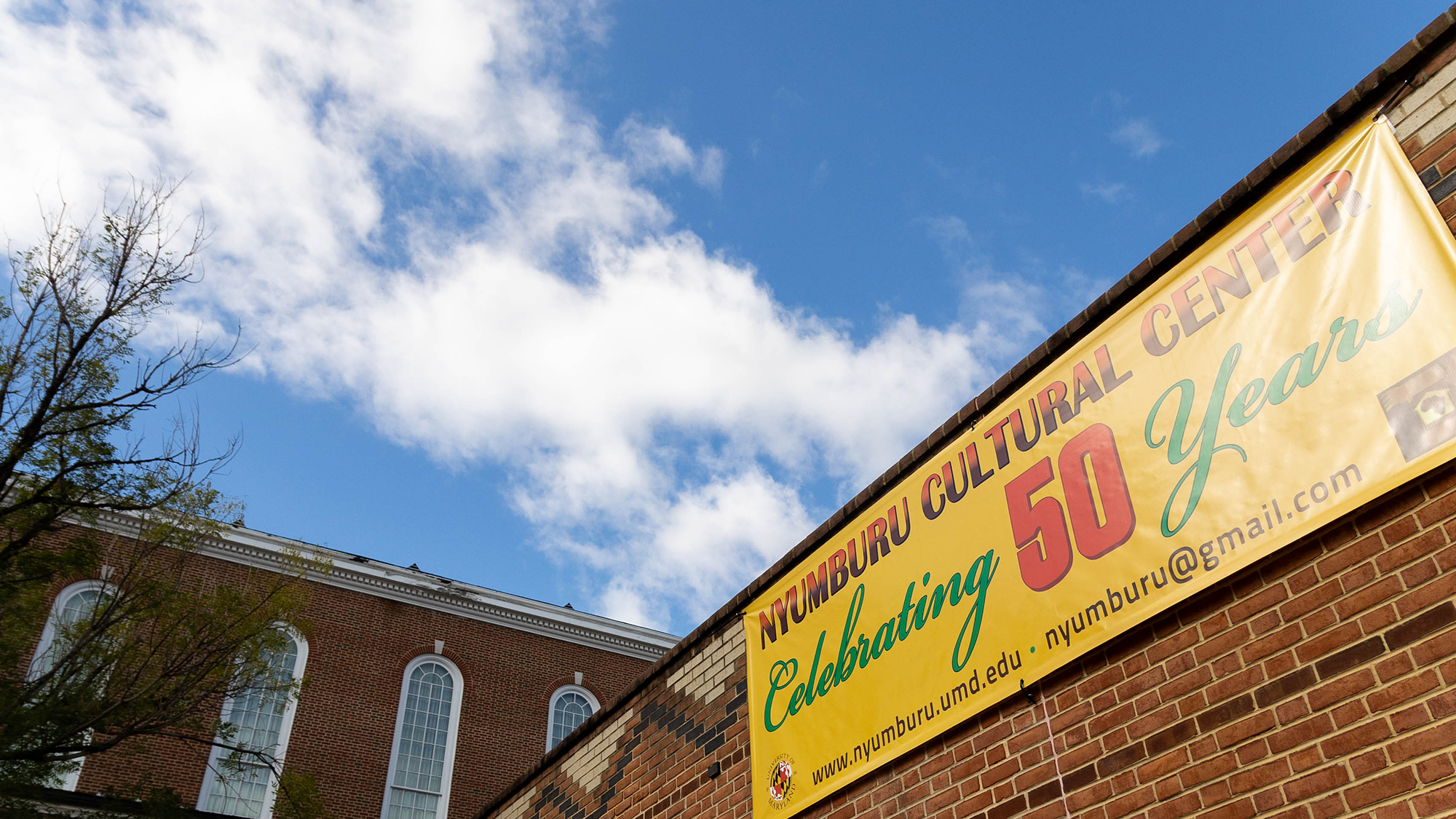 By Sofia Garay and Christine Zhu

When the Nyumburu Cultural Center at the University of Maryland opened its doors in 1971, it was housed in a temporary wooded facility in an area of campus known as the Gulch — a ravine at the bottom of a hill that is now South Campus Commons. It wasn’t a desirable location.

“The Gulch was always a joke for everybody and always had been. So whatever program was down there was a joke,” said Alice Murray, a former leader of the Intensive Educational Development program who retired from this university in 2006.

Nyumburu, which celebrated its 50th anniversary this month, is now in its third location: a standalone building in the center of campus. Through building changes, the center has remained a community and cultural nucleus for many. It’s a place where alumni return years after graduation.

The center, whose name comes from the Swahili words for “freedom house,” promotes an understanding and appreciation for African American culture, “in all of its richness and complexity,” according to its website. Nyumburu offers classes in jazz and blues. Since 1968, it has also sponsored The Black Explosion, this university’s first and only Black newspaper.

Ronald Zeigler, the center’s director, has been at the helm for more than two decades. Over time, he has seen the center evolve tremendously.

Zeigler emphasized the center’s “cultural legacy.” He’s followed in the footsteps of James Otis Williams, who was the director for 25 years.

Williams served as a beacon of support for students. While he passed away in 1997, his legacy lives on. He’s featured on a mural in Nyumburu’s mezzanine — an art project he had a vision for, according to the program from its 50th anniversary celebration.

Traci Birckhead, who graduated from this university in 1995 with a bachelor’s degree in computer science, remembers Williams as knowledgeable and conversational.

“It was always a history lesson,” Birckhead said. “No matter what you came here for, you could just be coming in for two seconds, he was going to give you some history and teach you something.”

Birckhead remembers when students boycotted the Stamp Student Union in the early 1990s in a push to move Nyumburu to its current location and out of South Campus Dining Hall, which was inconvenient for some.

Students who participated in the boycotts weren’t going to spend any money in Stamp until the university displayed that it acknowledged and cared about Nyumburu’s existence on campus. Birckhead didn’t realize how much time and money she spent in Stamp until she stopped.

“The connection that Nyumburu allowed us to have with the past really made us stronger on campus, but also recognize that we needed something bigger, and it was bigger than ourselves,” Birckhead said. “We had to fight and petition the university, to say, ‘we deserve something bigger than a room above the dining hall.”

In 1996, Nyumburu moved to its present location next to Stamp. Its design was inspired by the art and architecture of West African tribes, according to the program from its 50th anniversary celebration.

With the move, Nyumburu became known as “one of the few standalone Black cultural centers in the nation,” Zeigler said.

Rene Buckmon, who graduated from this university in 1987 with a bachelor’s degree in recreation described Nyumburu as a hub and a safe place for Black students.

“It was where we connected with one another, where we met others at campus,” she said. “If we weren’t meeting people in class, we were definitely meeting them at Nyumburu.”

He first became exposed to Nyumburu at one of its monthly juke joints in his freshman year — a talent show-like platform where anybody can showcase anything they want to share with people, he said. He hosted the Homecoming Juke Joint on Wednesday.

“I’ve been able to see and even facilitate an environment where people feel welcome, feel comfortable, feel at home, essentially, because that’s Nyumburu’s main mission,” he said.

Vivian Ebisike, a junior criminology and criminal justice major, is also a Nyumburu student ambassador. She described the center as a place where people can learn about other cultures aside from their own.

As a student ambassador, Ebisike hosts juke joints, helps students learn about the news and gives tours to potential students to give them a better idea of what Nyumburu offers.

“Nyumburu is a safe space for Black people and people of color to truly express their cultural identities,” she said.

Former Black Student Union president Naima Stevenson Starks graduated from this university in 1998 and went on to attend Harvard Law School. She thinks of Nyumburu as a “home away from home” and said she “can’t speak highly enough” about what it’s done for her.

“We’re like family members,” Stevenson Starks said. “They would always embrace students and make them feel comfortable being in a new environment, especially as we were coming in as freshmen.”

Kwaniyah Tuffour, president of the African Student Association on campus, remembers attending a birthday party event for Nyumburu her freshman year. Tuffour enjoys going to the center because it is a safe space for her. The junior community health major said she is able to connect with other students that share a similar background at the center.

“If I didn’t have that space, I’m not sure where I would be able to connect with so many other African students,” Tuffour said.