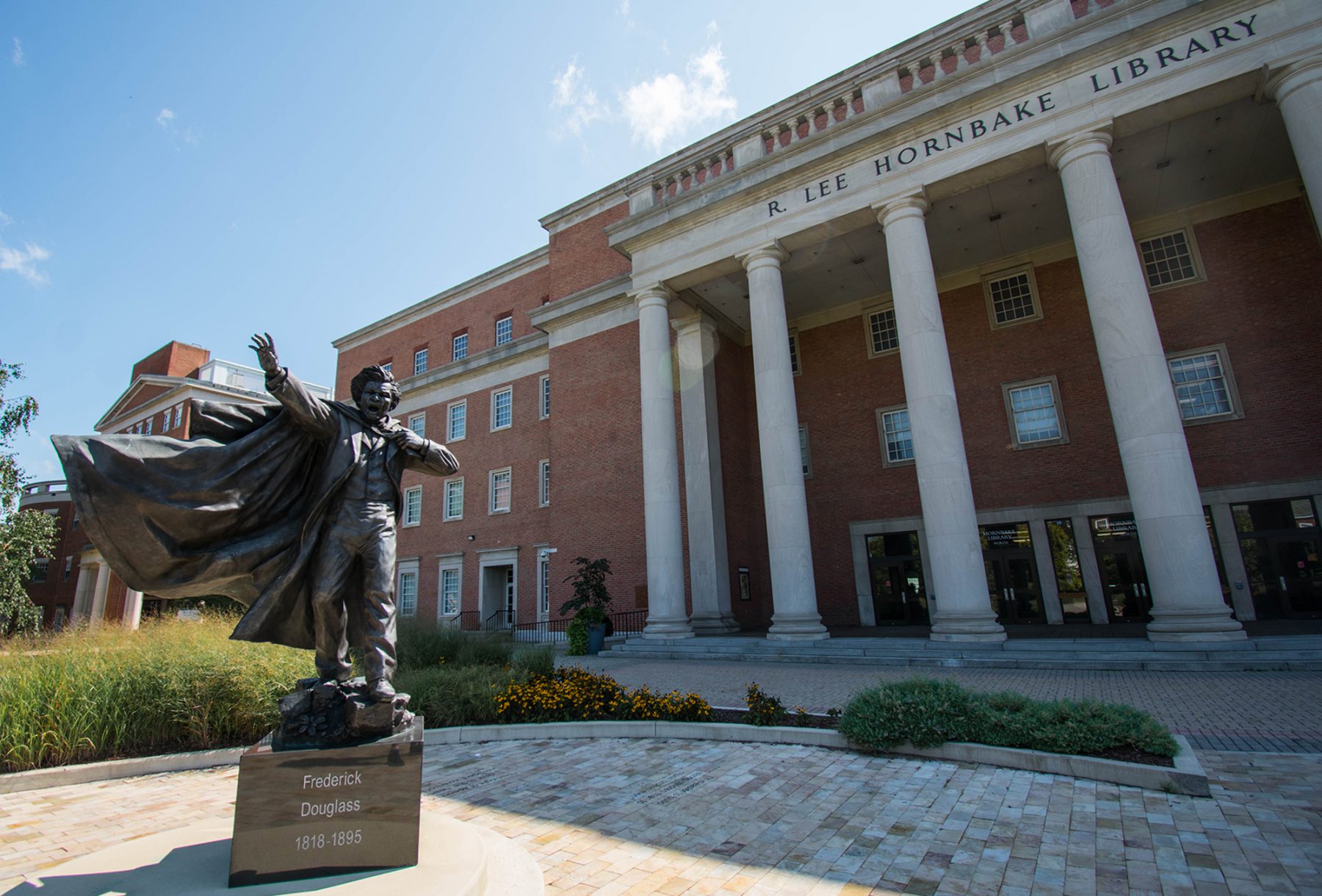 The University of Maryland's statue of Frederick Douglass is located in Hornbake Plaza. (Mateo Pacheco/The Diamondback)

Until Melanie Robbins began taking doctoral classes at the University of Maryland, she hadn’t heard the term “structural racism.” She didn’t even know the school had an African American Studies department until she ran into its headquarters, Taliaferro Hall, to hide from the rain.

Now, the International Education Policy doctoral student wants to make sure college students hear about the department and learn about structural racism — as well as other concepts related to race relations — much earlier in their academic careers.

“Our society needs some major changes,” Robbins said. “And as an educator, I obviously think education has a role to play in that.”

Three weeks ago, Robbins wrote a petition calling on the university to increase its support for the African American Studies department. She detailed two ways the university should do so: providing more funding to the department and requiring all undergraduates take an introductory level African American Studies course. So far, more than 9,800 people have signed in support.

According to a statement from a university spokesperson, students, faculty and staff must work together to determine a “better future for all.”

“Petitions play an important role in advocacy work and are a way for us to listen and to understand our students[’] call for change,” the statement read. The statement did not address whether the university would be directing more funding toward the African American Studies department.

On Wednesday, the university released its “Anti-Racism Action Plan.” The university will be reevaluating courses offered as part of the General Education diversity requirement, the email announced, as well holding a series of conversations with the campus community throughout June and July.

Robbins started the petition after seeing a tweet from Alexis Ojeda-Brown, a university alumna, who asked the university to take direct action in supporting the Black community instead of issuing “empty” statements.

How about you open your purse for your African American Studies department? How about you make AASP 100/101 classes education requirements for all students?

Having worked in the African American Studies department — juggling phone calls, ordering textbooks and fulfilling other duties as part of the federal work-study program — Ojeda-Brown said she’s seen how the university has neglected it. The programs that the department offers aren’t well-advertised, she said, and neither are resources such as Nyumburu Cultural Center, which she only found by accidentally walking through it.

During her four years on the campus, Ojeda-Brown and other students made petitions and held marches, urging the university to better support the Black community, she said. However, she said, they never gained much traction.

But now, amid nationwide protests against systemic racism and police brutality, Ojeda-Brown said there seems to be a renewed sense of urgency.

“Hopefully the more people that have eyes on [the petition] will force UMD to get their act together,” Ojeda-Brown said, “and focus on what really matters in making that school a safe place, a place that actually supports its students and teachers.”

Dr. Sangeetha Madhavan, a professor in the African American Studies department, voiced her support for the petition. Increased funding would allow the department to hire more faculty and to offer a larger variety of courses, she said — and would make it feasible for the university to require all undergraduates to take an introductory course in the department

Doing so would be especially important, since courses offered by the department can teach students to think critically about race, class and identity, Madhavan said.

“These issues, to me, absolutely transcend race, transcend class, which part of the country you’re from, your religion, all of those things,” Madhavan said. “This is what citizenship means — to be knowledgeable, to be able to think through what these issues are about.”

One of the biggest myths about African American Studies, Madhavan said, is the idea that the department serves as a silo for students of color. Having a required class would not only dispel this misconception, but would also allow some students — those who aren’t particularly knowledgeable about issues involving race — to gain a better understanding.

Ojeda-Brown said she’s noticed that most students in the African American Studies department are Black or Latinx — but with increased funding and a required class, a more diverse array of students could be educated, she said.

“I think that white students probably need this more than Black students do, because we live it,” Ojeda-Brown said.

Nevertheless, the path to bringing about this change can be complicated. Even if the petition reaches its goal of 10,000 signatures, there’s no guarantee the university will take action.

In light of the coronavirus pandemic, which has cast a shadow of uncertainty on the university’s financial future, Madhavan said she doesn’t expect the provost to simply write a check to the department. Instead, it’s more likely that the university’s development office will embark on fundraising initiatives for the department or that the University System of Maryland will adjust its allocation of money, she said.

Robbins, who served in the University Senate for part of her Ph.D. candidacy, said the legislative body could use the petition to officially propose some of the changes.

Reka Montfort, the director of the University Senate, wrote in an email she has neither heard of the petition nor received any requests to consider its proposals. However, if a proposal were to be put forward, she advised that it consider the university’s existing process for creating new course requirements, as well as the burden these requirements may place on the African American Studies department.

But even if the university doesn’t immediately act on the demands put forward in the petition, it shouldn’t be regarded as a failure, Ojeda-Brown said; thousands of people have voiced their support and promoted its message.

And with the ongoing protests, it’s possible more students will be interested in taking African American Studies courses — which, Madhavan said, the department could use to leverage support from the university.

“I think we are at an important, sort of watershed moment,” Madhavan said. “We have every intention — both in what we teach in our programming, activism, community engagement, and of course engaging with the rest of the university — to make sure that … we sustain this kind of momentum.”