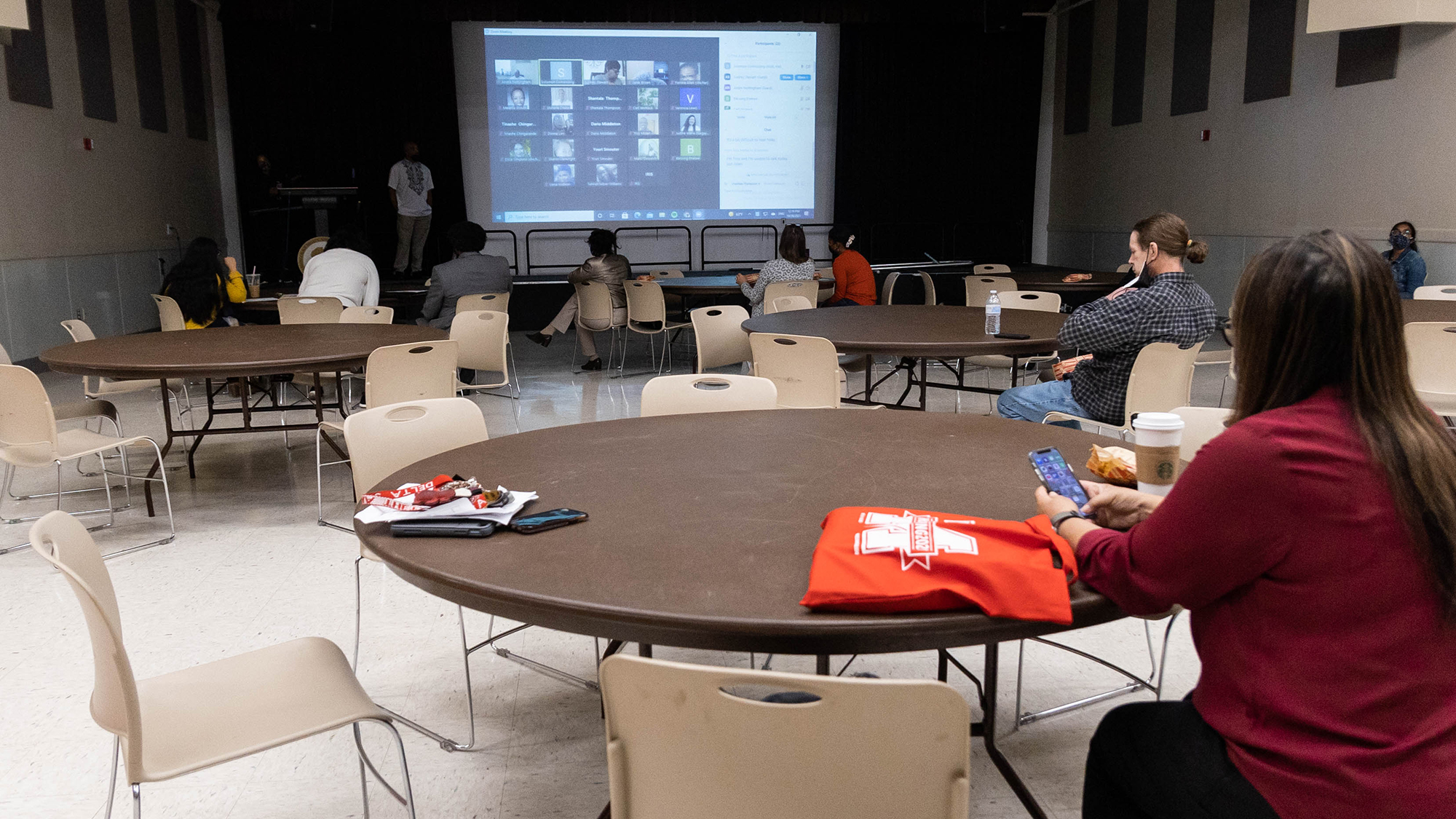 Editor’s Note: This story previously included a quote from BFSA President Solomon Comissiong about the relationship between former university President Wallace Loh and former chief diversity officer Roger Worthington. The Diamondback did not seek comment from Loh or Worthington, which does not meet our editorial standards. The quote has been removed. We regret the error.

Faculty and staff at the University of Maryland spoke out against anti-Black racism at this university during the Black Faculty and Staff Association’s town hall Tuesday.

At the town hall, which was a hybrid event held in the Nyumburu Cultural Center and on Zoom, Black employees at this university shared their experiences with discrimination and anti-Blackness during their time on the campus.

At the center of it all was Dr. Carlton Green, the former director of diversity training and education in this university’s Office of Diversity and Inclusion.

Green said at the town hall that he resigned from his position because he was upset with the way his supervisors and others at the university dealt with racism on campus.

“I let people know that I was resigning because of a lack of accountability from the institution when it comes to anti-Black racism,” Green said. “It became very clear to me that harm would continue to be perpetrated against people here at the institution.”

Green filed a complaint with the general counsel’s office at the university. The complaint is being investigated, he said. The situation is one that resonated with some faculty members.

“They have a PR machine like a corporation on Wall Street would have,” said Solomon Comissiong, BFSA’s president.

Comissiong applauded Green for speaking out and encouraged other employees to do the same when confronted with racism and other forms of discrimination.

“People are being abused verbally … and dealing with all kinds of racism and sexism and homophobia every single day. And if we don’t speak up, it is going to continue on in perpetuity,” he said.

Dr. Traci Dula, the associate director of this university’s Honors College for administration and operations, said BFSA should lead an effort to compile stories from faculty and staff who have faced racism at the university. It would be an alternative to incident reports, which she said often go ignored by administration after they are filed.

“We need to do something different … the narratives of the things that they experience so we can have a mind-blowing experience for other people who just can’t seem to see the experiences that we’re having on this campus,” Dula said.

She also suggested the university create a more cohesive exit interview process to hear employees’ concerns when they resign.

In addition to racism and anti-Blackness, employees at the town hall advocated for raising the minimum wage and giving workers COVID-19 hazard pay — two issues that various employee and labor organizations at this university have fought for over several months.

Attendees also discussed a proposed University of Maryland policy, where all new hires — not just those currently required to by federal or state policies — would undergo background checks. Some BFSA members are concerned about how this policy could disproportionately harm workers of color.

“[For] certain segments of the population, i.e. Black and brown, that policy maybe is not consistently applied,” said Dr. Jerry Lewis, the executive director of the university’s Academic Achievement Programs.

Comissiong suggested that BFSA invite individuals from the university’s human resources department, as well as members of the University Senate who are involved in the bill implementing the policy, to come talk to members and explain the details of the potential background checks.

Throughout the town hall, speakers emphasized the need for speaking up and fighting for progress at this university.

“If there are not ways that we claim attention … the institution is not going to continue to be its best self,” Green said. “Tell your story and make it loud.”

CORRECTION: Due to a reporting error, a previous version of this story misstated that Roger Worthington authored a report on the campus climate. The story also misstated that Worthington criticized the university’s handling of racism. This story has been updated.