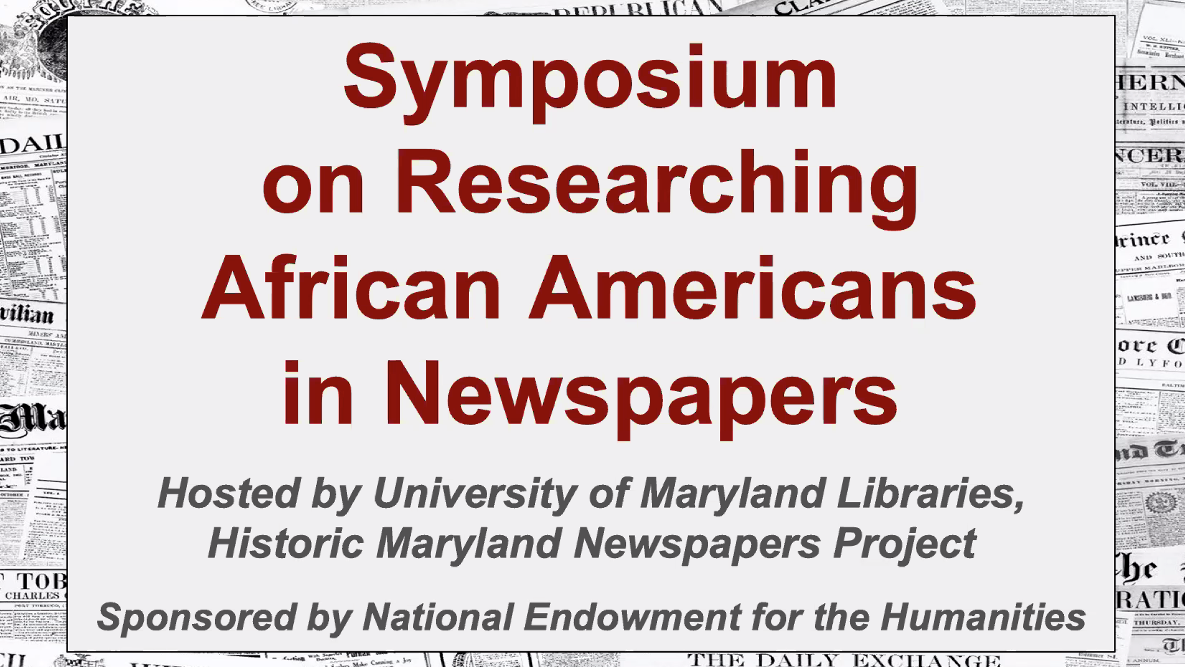 (Screenshot by Eva Booth/For The Diamondback)

By Eva Booth
For The Diamondback

University of Maryland Libraries hosted a symposium on Thursday, discussing research on how newspapers historically chronicled the African American experience.

226 people attended the meeting, which was held by the Historic Maryland Newspapers Project. Panelists Maya Davis and Timothy N. Pinnick discussed their research of African Americans through newspapers.

“While I agree with the somewhat cliched statement that newspapers are the first draft of history, I have discovered through my own research that historic newspapers are a critical resource for uncovering previously ignored or forgotten voices,” Doug McElrath, one of the symposium’s hosts, said.

Davis, the Riversdale House Museum director, described how even from a young age, she’s found newspapers to be a helpful tool to understand history. She began using newspapers in her research during college, which prepared her for working on the Maryland State Archive’s Study of the Legacy of Slavery in Maryland program.

The project digitizes and interprets Maryland newspapers’ coverage of slaves. The research not only documented well-known Black leaders such as Frederick Douglass and Harriet Tubman but also revealed lesser-known stories, such as James Collins Johnson’s escape from enslavement in Maryland to Princeton University.

“It’s so wonderful that we’ve been able to now take this from paper to imagery,” Davis said. “We are discovering more and it shows and highlights the importance and the value of digitization and transcription and accessibility.”

The research process isn’t without its struggles, Davis said.

“For prominent figures like Harriet Tubman and Frederick Douglass, the documents were removed from newspapers, meaning that they were taken at some point by some individual who recognized their value,” Davis said. “We are able to see evidence of square cutouts of whole missing pages.”

Pinnick, author of “Finding and Using African American Newspapers,” focused on researching Black newspapers and how they document genealogy.

“There’s my daddy. Wow. Who would have known that I would have found in the Chicago Defender, February, 24, 1923, an entry that marked my father coming into the world,” Pinnick said. “I just sat back in my chair that day at the library when I found this and it was just really, really neat and I’m so happy that I was able to share this with my dad.”

Pinnick stressed that the majority of papers are not available online, so libraries and repositories are extremely important to gaining information like Pinnick’s father’s birth announcement.

“Newspapers are essential to research success, make no mistake about it,” Pinnick said.