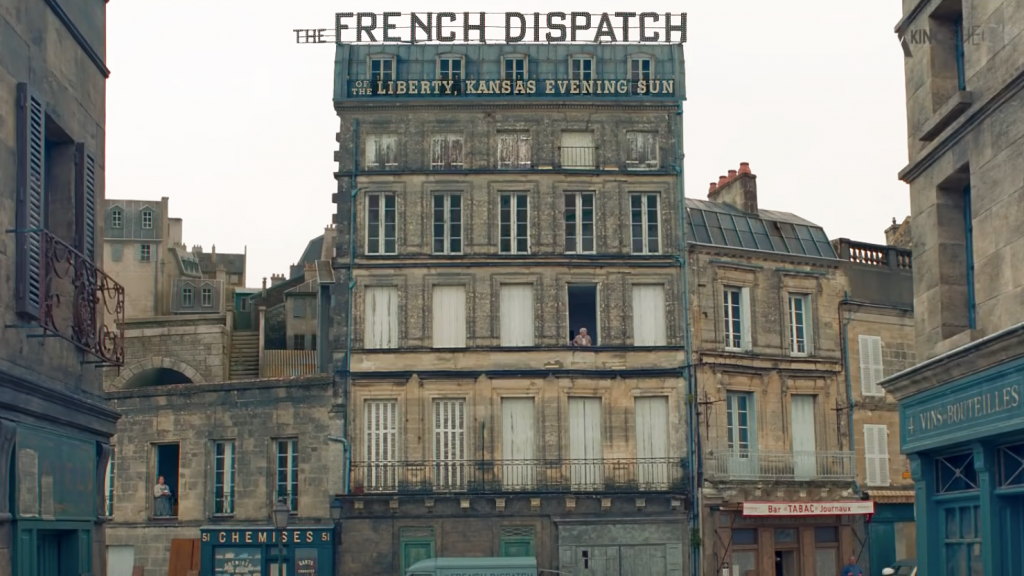 There’s something about being a journalist and watching a film about people who share your profession. It feels voyeuristic but also intriguing, because from a student perspective, these characters are where you hope to be after graduation — in a newsroom, hammering away at a keyboard, telling stories that need to be told, and ultimately, telling the truth.

Truth-telling is woven throughout Wes Anderson’s The French Dispatch, in articles and conversations, even when it’s challenging and equally as embarrassing. Various writers from the titular newspaper (a shoot off of the Liberty, Kansas, Evening Sun) in Ennui-sur-Blasé, a faux-city in France, narrate their stories.

The city, its name cleverly containing “ennui” and “blasé,” initially seemed to embody those words. But as viewers watch, the breadth of the city is slowly peeled back, from its eccentric inhabitants to the even more eccentric writers covering it.

The French Dispatch is an anthology centering four writers: J.K.L. Berensen, an art writer played by Tilda Swinton, Lucinda Krementz, a reclusive essayist played by Frances McDormand, a reclusive essayist, Herbsaint Sazerac, a cycling reporter played by Owen Wilson and Roebuck Wright, a jack-of-all-trades reporters with a typographic memory played by Jeffrey Wright. Each writer contributed to the late editor in chief’s obituary, in addition to their own original stories for the magazine’s final issue.

To quote Anderson from The French Dispatch’s featurette, this film “is three things: anthology, The New Yorker and a French movie.” Told in multiple parts, languages and point of views, this film hooked the viewer until the very end, which included a credit scene that dedicated the film to multiple journalists, one in particular being Mavis Gallant, who Krementz is based on.

“All grand beauties withhold their deepest secrets,” said Sazerac near the beginning of the film, a quote that encompasses The French Dispatch entirely. In addition to truths, this movie shines in its secrets that are revealed along the runtime of the movie, such as ethically murky relationships between characters.

An accurate depiction of journalism and its complications is a motif in The French Dispatch. Wright was originally assigned a piece about a police chef, but the story goes in a completely different direction than planned — involving kidnapping, and a car chase — which any journalist can relate to.

While it is lovely to be in charge of your own story, sometimes, with the way sourcing and researching goes, it feels more like you’re chasing the story in a twisted game of tag than being the one to pen it.

However, in the midst of displaying the writers’ subjects in all of their peculiarities, the viewer still gets a peek into who the writers are.

Seemingly aloof and pretentious, Lucinda Krementz is ostensibly concerned about journalistic integrity to a fault. Her journalist-to-source relationship with Zeffirelli, played by Timothée Chalamet, a leader of a student uprising, is reminiscent of a mentor and mentee — but their relationship occasionally crossed the line.

J.K.L. Berensen is enamored by the work of virtuoso artist Moses Rosenthaler, played by Benicio Del Toro, and narrated the artist’s life story through his art.

Wright is straight-laced and dedicated to the craft of journalism, willing to go wherever his story takes him. Every character in this movie is very distinct.

Director and writer Wes Anderson creates his films with an immediately recognizable style, one that has been written about at length by many, many people. Full of distinct color schemes, throwing the rule of thirds out of the window in favor of centered characters and a warm, cozy aura, The French Dispatch stands out among many films.

[Review: ‘No Time to Die’ is a grand finale, but lacks some needed backstory]

One of the most moving scenes of the movie is a moment between the late editor in chief of The French Dispatch, Arthur Howitzer, Jr., played by Bill Murray, and Wright. In an editing session for Wright’s climactic food story, he explained how he cut out a part of the article. Howitzer demanded to see it and ended up including the originally omitted quote, saying Wright deleted the most important part of the story.

This scene, among others, perfectly captured the humanity of these journalists as not only writers but as people, perfectly capturing the ping-pong nature of the editor-writer relationship.

The movie’s stacked cast brings these complex relationships and characters to life, each actor bringing the utmost attention to detail in their characters’ mannerisms and motivations. From Swinton’s audacious pride in playing Berensen to Wilson’s enthusiasm about revealing the underbelly of Ennui-sur-Blasé, their performances are laudable.

There is a plethora of praise to give The French Dispatch for its plot. This film created a viewing experience for the audience that relied on strong visuals which activated all five senses, immersing the audience in its beauty. With a tight grip on its characters and their personal and literal newspaper stories, The French Dispatch is a must-watch.