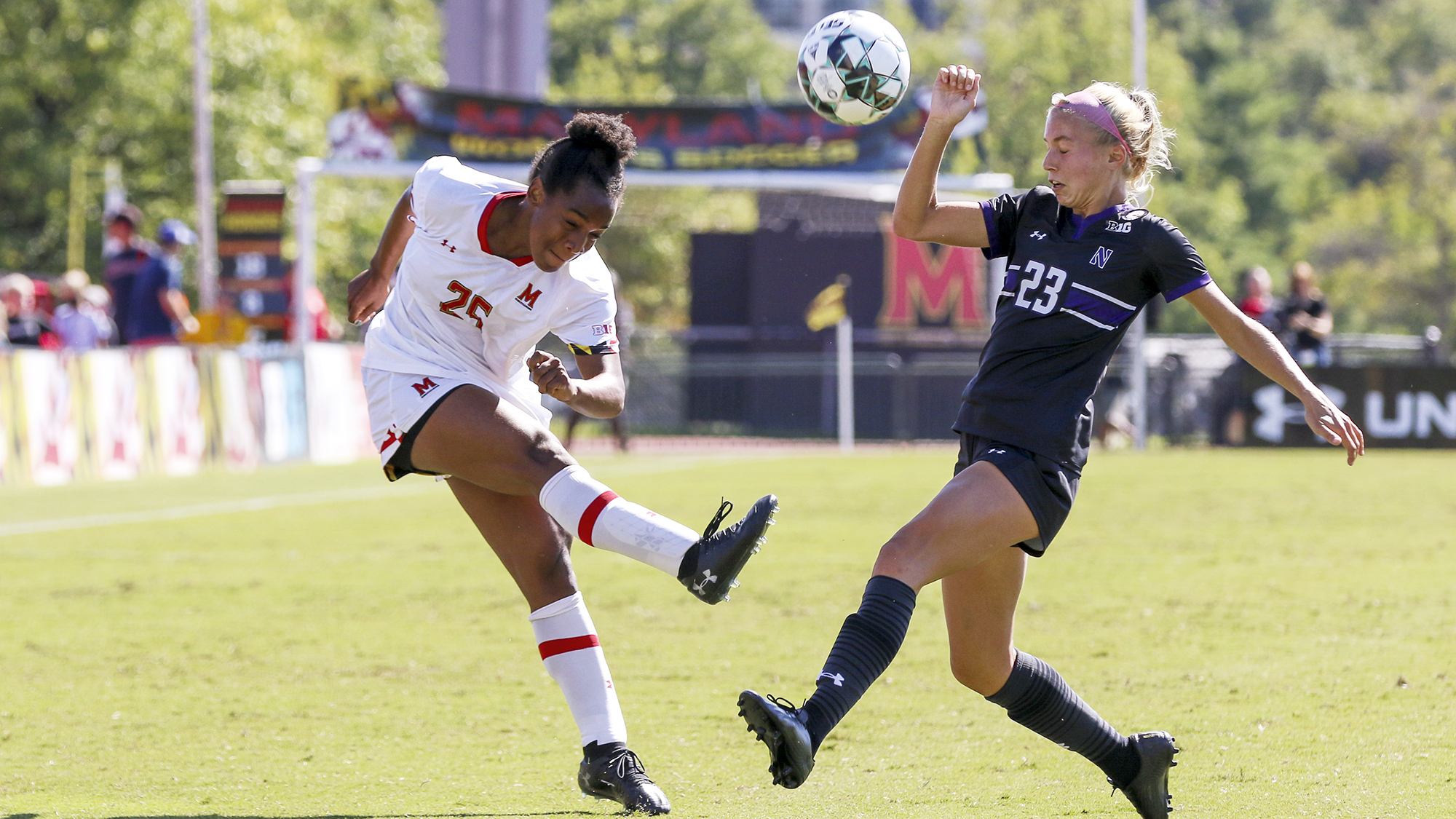 Maryland’s Zora Jackson and Northwestern’s Ingrid Falls challenge for the ball during the teams’ 1-1 draw on Sept. 26, 2021. (Cam Andrews/The Diamondback)

Goalkeeper Madeline Smith came onto the pitch at halftime, hoping to make an impact and prevent Penn State from adding to its three first half goals.

Just three minutes later, she had to pick the ball out of the back of her net. The Nittany Lions only needed two passes in their attacking half to play straight through Maryland’s entire team, leaving Smith helpless.

The Terps made an unfortunate habit of conceding on the night, shipping five goals against Penn State en route to their third straight loss. It was the most the team allowed in a single game since they played the Nittany Lions last year.

Maryland hoped to keep it much closer this season after a 6-0 loss to Penn State in the spring, as coach Ray Leone shifted to a 4-4-2 as opposed to the 4-3-3 they’ve used throughout the majority of the season.

“The 4-3-3, when it was at its best, was built with Alyssa [Poarch] playing attacking mid,” Leone said. “So we’re trying to reinvent ourselves without her and trying to find what’s best for our team.”

This brought the Terps’ wingers deeper, and throughout the first 15 minutes of the match, they were largely able to avoid any defensive breakdowns by keeping at least nine players behind the ball.

Malikae Dayes was crucial in Maryland’s new formation, as the center back moved up into central midfield, consistently breaking up plays and keeping possession for the Terps.

But Dayes went down and had to be subbed off in the 16th minute.

“Putting Malikae Dayes in the midfield was really a big move for us,” Leone said. “And unfortunately, it only lasted 15, 20 minutes. That was not the plan, let’s put it that way.”

While Dayes eventually came back and played in the second half, most of the damage had been done by then, as Maryland’s new shape didn’t slow down the Nittany Lions’ attack.

It took Penn State only three minutes to capitalize after Dayes left the field injured, slicing through the Terps’ midfield and defense with two passes to take the lead.

After winning the ball back, the Nittany Lions only needed three passes to find Sam Coffey, who completed her hat trick in the 40th minute.

And on all five of their goals, Penn State never needed more than three passes in its attacking half of the field before finding the back of the net.

Maryland couldn’t cope with the verticality the Nittany Lions’ forwards provided. While Leone hoped the 4-4-2 would prevent such an onslaught, Penn State had their way and played directly through the Terps.

The rout sends Maryland back to the drawing board before a crucial week with home matches against No. 8 Rutgers, which is undefeated in Big Ten play, and Indiana. Leone hopes to use the time to practice and get his players back to full strength.

“We’ve got so much time now, the longest stretch that we’ve had between games since I don’t know when,” Leone said. “So we’ll get healthy and we’ll bring our best on Thursday night.”