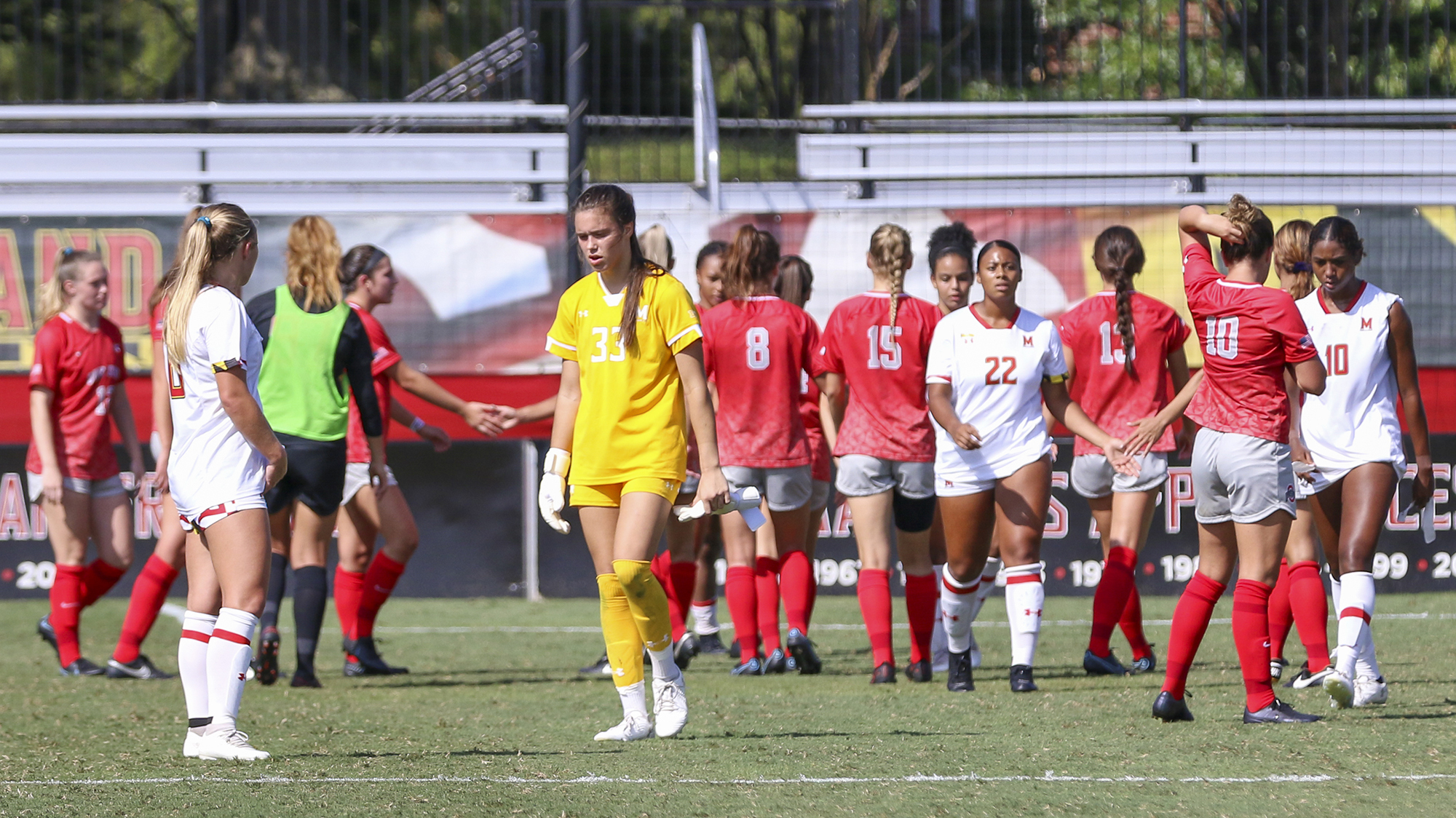 Penn State’s Sam Coffey took a touch and strode through Maryland’s defense before her strike found the back of the net, making it look easy while completing her first-half hat trick.

While both sides came into the match struggling, Coffey and the Nittany Lions looked like their normal selves in a 5-1 rout of the Terps.

Maryland struggled to defend Penn State once again and has now shipped 11 goals in its last two matches against the Nittany Lions.

Penn State took the lead in the 19th minute after some strong build up play. The ball was played in to Ally Schlegel, who knocked a first-time through ball to Coffey. She took two touches before her left-footed shot nestled inside the far post.

Mikayla Dayes won the ball after a poor touch from Mieke Schiemann, and the forward calmly finished past Katherine Asman to tie it up.

Penn State retook the lead in the 28th minute. Liz Brucia did well to tip Cori Dyke’s curling strike onto the post, but Coffey was there to put in the rebound.

Coffey, who was selected with the 12th pick in the 2021 NWSL draft by the Portland Thorns earlier this year, continued to cause all sorts of problems for Maryland’s defense, bagging her hat trick in the 40th minute.

The reigning Big Ten Midfielder of the Year did well to glide through two defenders with her first touch before finishing past Brucia for the third time.

The Nittany Lions carried a two-goal advantage into halftime, outshooting the Terps 11-2 in the first 45 minutes. Maryland’s strike came from its only shot on target.

While the Terps’ change in shape to a deeper 4-4-2 looked like it would work early, Penn State was still able to find ways to penetrate Maryland’s defense.

The change also left the Terps’ forwards disconnected from the midfield throughout most of the first half, and they struggled to get the ball up the pitch. Maryland switched from playing a 4-3-3 earlier this season but has been forced to make changes after star forward Alyssa Poarch was ruled out for the remainder of the year.

“The 4-3-3, when it was at its best, was built with Alyssa playing attacking mid,” coach Ray Leone said. “So we’re trying to reinvent ourselves without her and trying to find what’s best for our team.”

The Nittany Lions set up with three defenders in the back and were able to control most of the match as the Terps’ forwards struggled to get in behind Penn State’s defense.

“They set up in a good formation,” Leone said. “When you play against three [in the] back you got to get in behind them, and we just didn’t do it enough. So that made them all comfortable, they had good spacing everywhere, moved the ball really well and had us chasing.”

While Maryland wanted to turn it around in the second half, its hopes of getting anything out of the match were quickly dashed in the 48th minute when the Nittany Lions added to their lead.

Coffey once again contributed to the goal, this time providing a through ball to Rachel Wasserman, who finished at the near post.

Penn State added a fifth just five minutes later. Jilly Shimkin played a great long ball into the box, and Schlegel produced an even better looping header from a difficult angle that hit the bottom of the crossbar and went in.

The Nittany Lions were able to ride the rest of the game out for a 5-1 win, as the Terps dropped their third straight match.

The loss extended Maryland’s winless streak to nine games, with the Terps in desperate need of better results in their remaining Big Ten games to keep their hopes of qualifying for the conference tournament alive.

While Leone was disappointed with the defeat, he was excited with the high level of soccer his team was up against and hopes it will serve his side well heading into a difficult stretch at the end of the season.

“I enjoyed the competition and the level of the play,” Leone said. “That’s what we kept saying to our team, just keep playing, keep playing, because this is a special level, enjoy it and get better. Of course we want to win, and we didn’t win, and that’s the most important thing. But still, it was still exciting level soccer.”