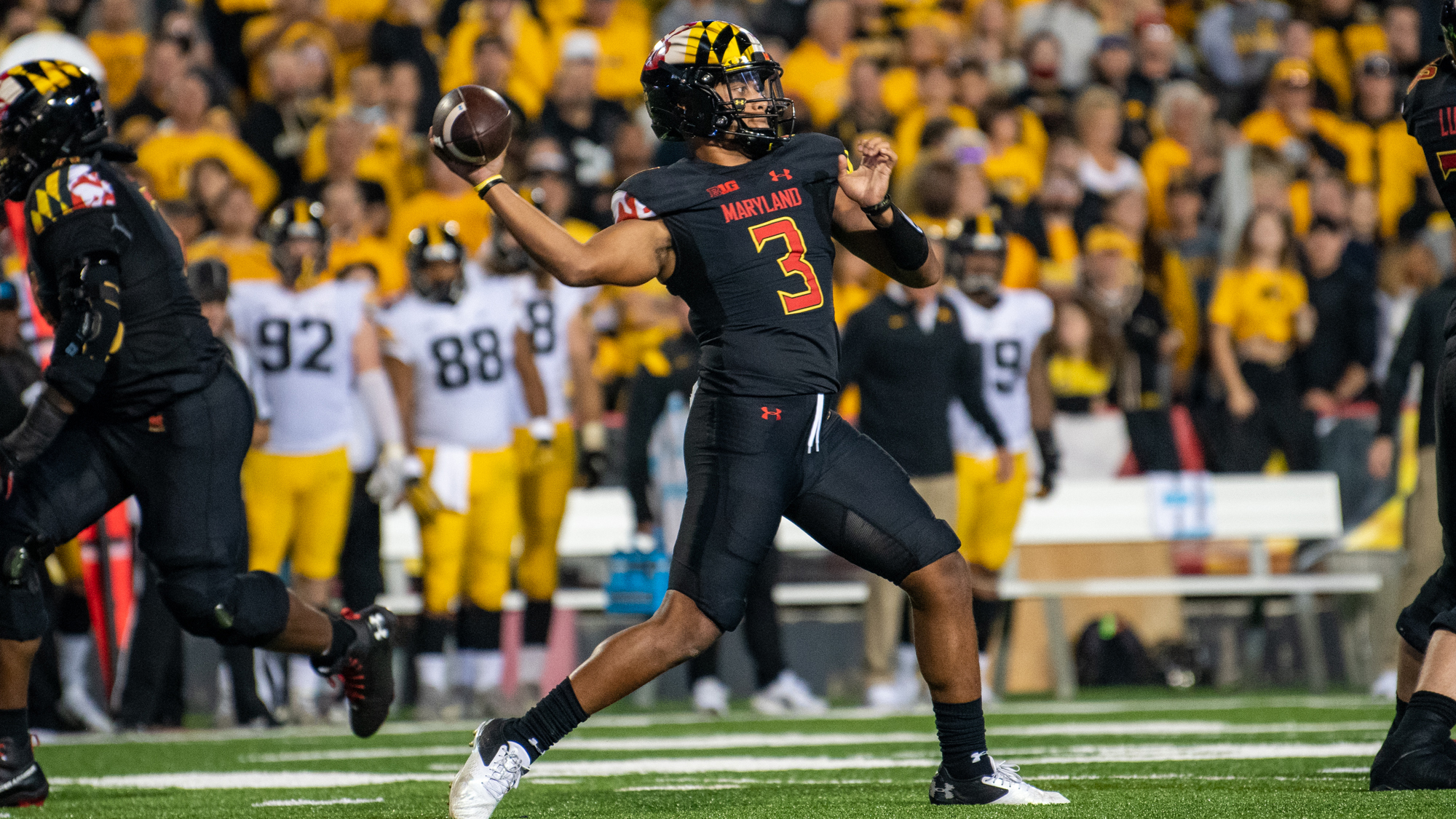 Taulia Tagovailoa throws a pass during the Hawkeyes’ 51-14 win over the Terps on Oct. 1, 2021. (Joe Ryan/The Diamondback)

For nearly all of its tenure in the Big Ten, the story’s been the same for Maryland football.

A hot start with a big nonconference win raises hopes, only for the Terps to crash and burn once the schedule toughens during conference play. Be it injuries, underperformance or simply being outmatched, Maryland has yet to show it can rebound when pushed around.

In their first six years in the Big Ten, the Terps’ inflection point has often been a game against Ohio State. They’ve never beaten the Buckeyes, but their typically uncompetitive performances in those contests often sends their season spiraling out of control.

After starting 4-0, then getting plastered by No. 5 Iowa, Maryland is in the same spot in 2021. No. 7 Ohio State awaits Saturday in Columbus, eager to pounce on a Terps squad reeling from a season-ending injury to star wideout Dontay Demus and a primetime embarrassment on home turf.

“They’re one of the top teams in our conference year in and year out,” coach Mike Locksley said. “I know our players are excited about the opportunity to go on the road and play a good team and have an opportunity to try to respond.”

To do that, Maryland will have to buck a trend of futility dating back to its very first Big Ten home game.

The Terps welcomed the Buckeyes to College Park on Oct. 4, 2014, sitting at 4-1 and looking to make a statement, much like they are now. But Ohio State spoiled the festivities, quickly taking a two-score lead and running away with a 52-24 win.

Though Maryland made a bowl game in 2014, that loss laid the groundwork for nearly a decade of Buckeye blowouts cementing the Terps’ place in the Big Ten’s basement.

Maryland has lost by at least three touchdowns in five of the teams’ six meetings, with three of those matches decided by 48 points or more.

The Terps fired head coach Randy Edsall after leaving Columbus 21-point losers in 2015, and though 2018 came down to the final play in overtime, Tyrrell Pigrome’s misfire on a two-point conversion attempt kept Maryland winless against the Buckeyes.

The stats are even more stark. Entering their six meetings with Ohio State from 2014-2019, the Terps were a combined 22-20, outsourcing their opponents by a combined 128 points.

After the six Buckeye beatdowns — in which Ohio State outscored Maryland by 216 points — the Terps fell apart. Maryland finished those six seasons a combined 6-20, getting outscored by a whopping 371 points.

Part of that disparity is due to the Terps’ weaker nonconference slate giving way to a Big Ten gauntlet, and the Buckeyes usually come at the right place in the schedule to thoroughly exploit Maryland’s weaknesses.

“No opponent’s gonna be a pushover,” wide receiver Rakim Jarrett said. “You gotta come out on your A-game every week.”

[Against No. 5 Iowa, Maryland football continued its big-game blunders]

There’s reason for the Terps to fear it’ll be more of the same. Their response to past shellackings has often been lackluster, perhaps no example more memorable than finishing the 2019 season 1-7 after losing 59-0 to rival Penn State. This season’s plethora of injuries — especially the loss of Demus, one of Maryland’s best players — surely doesn’t help either.

But even with the odds stacked against them, the Terps are hoping to change their fortunes this time around.

This is Maryland’s most talented team since it joined the Big Ten, and the Terps finally have a stable quarterback in Taulia Tagovailoa, who had the worst performance of his career against the Hawkeyes. The Iowa game was rock bottom and likely an “anomaly,” Locksley said.

As long as Maryland remains competitive against Ohio State, it will be an encouraging sign of progress.

“The key is, in road games like that, is to get it into the fourth quarter,” Locksley said. “When you do that, anything can happen.”

The Terps’ performance will be critical in judging their second-half prospects. Following Saturday’s contest, Maryland has a bye week followed by two winnable games against Minnesota and Indiana.

The November slate gets challenging, so it’s more important than ever that the Terps don’t fall apart as they have in past years. That starts with a strong showing against the Buckeyes, including a bounceback from Tagovailoa.

Otherwise, the story will be the same.

“If we want to win big games … I gotta be on top of my game,” Tagovailoa said.