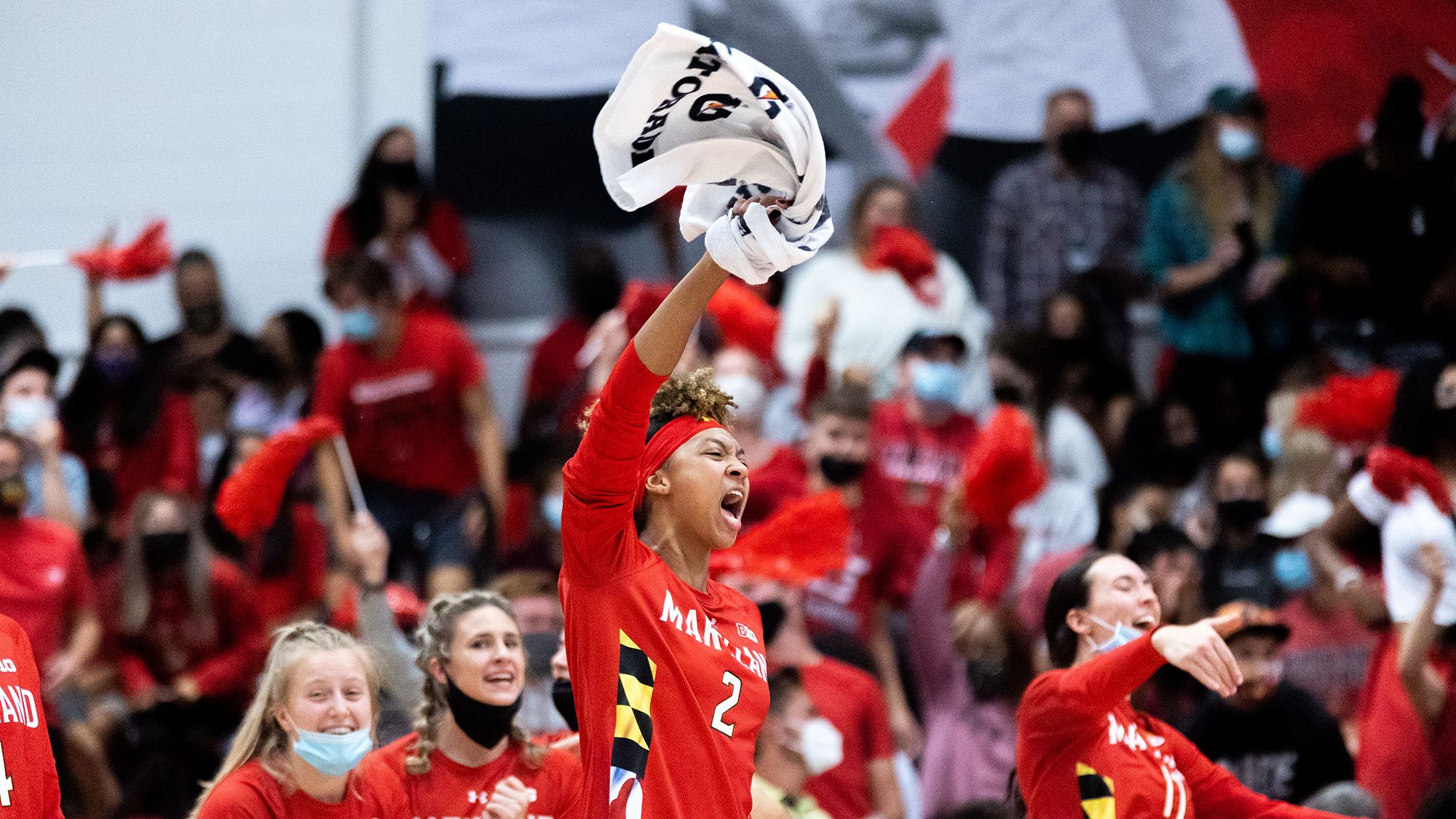 Middle blocker Rainelle Jones cheers on the team during Maryland's 3-2 loss to No. 14 Penn State on Sept. 29, 2021. (Julia Nikhinson/The Diamondback)

Maryland volleyball was on the brink of its second program milestone in less than a week in College Park on Wednesday.

The Terps had No. 14 Penn State on the ropes, holding a two-set advantage over the visiting Nittany Lions following back-to-back masterful set victories.

“We were a little bit more in system in the first two sets,” coach Adam Hughes said. “We had really good balance, we were moving the ball around, and that’s always been a goal of ours.”

But the Terps’ upset campaign skidded to a halt in the third set.

The Nittany Lions quickly came to life following their sluggish start, as outside hitter Jonni Parker blitzed Maryland’s block with a cluster of kills from the outside. Riding the momentum of a 25-22 third set victory, Penn State grabbed the final two sets of the evening to snatch a 3-2 come-from-behind victory out of the Terps’ grasp.

“The difference [was] they started picking up more tips and covers, extending rallies a little bit,” Hughes said following the loss. “I didn’t think we backed down, I just thought they were doing a little bit better job with some of their out of system attacking.”

[Maryland volleyball falls after battle with No. 14 Penn State, 3-2]

Despite the loss, the Terps came dangerously close to picking up their second victory over an elite Big Ten opponent early in their season.

For middle blocker Rainelle Jones, Maryland’s strong showings against Wisconsin and Penn State proved she and the Terps can go toe-to-toe with any team in a loaded Big Ten conference.

And while Jones and the Terps suffered their second straight loss following a 13-0 start, Maryland will have plenty of chances to prove their ascension into the upper echelon of Big Ten teams.

Hughes’ squad will fly to Columbus, Ohio, for its final contest of a brutal opening slate later in the week.

“We’ll get back to work tomorrow and get another crazy test against Ohio State,” Hughes said. “This is a hard stretch for us, and we knew that, but obviously like where we’re at right now, and how we’re playing.”

[‘No gimmies’: Maryland volleyball is halfway through the most difficult stretch of its schedule]

The Buckeyes, led by sophomore opposite hitter Emily Londot, enter Saturday’s contest following a 3-0 decimation of Indiana at home on Wednesday.

Londot, who currently ranks fourth in the Big Ten in kills per set, is one of Hughes’ top priorities as the Terps prepare for yet another elite Big Ten opponent.

“We had two good battles with [Ohio State] at their place last year, but I think both teams are a little bit different,” Hughes said. “They [had] the National Freshman of the Year last year in [Londot]… so we know we’ll have our hands full.”

For Jones, putting up a strong showing against Londot and the Buckeyes starts with rekindling the fire her team brought in their historic win over Wisconsin last week.

“We’re there, but we’re not there yet,” Jones said. “We lost to Minnesota, and we lost to Penn State, but we beat Wisconsin, so we need to go back to what we did [against] Wisconsin, learn from the past two matches, and then take it to the next.”