Maryland volleyball falls after battle with No. 14 Penn State, 3-2 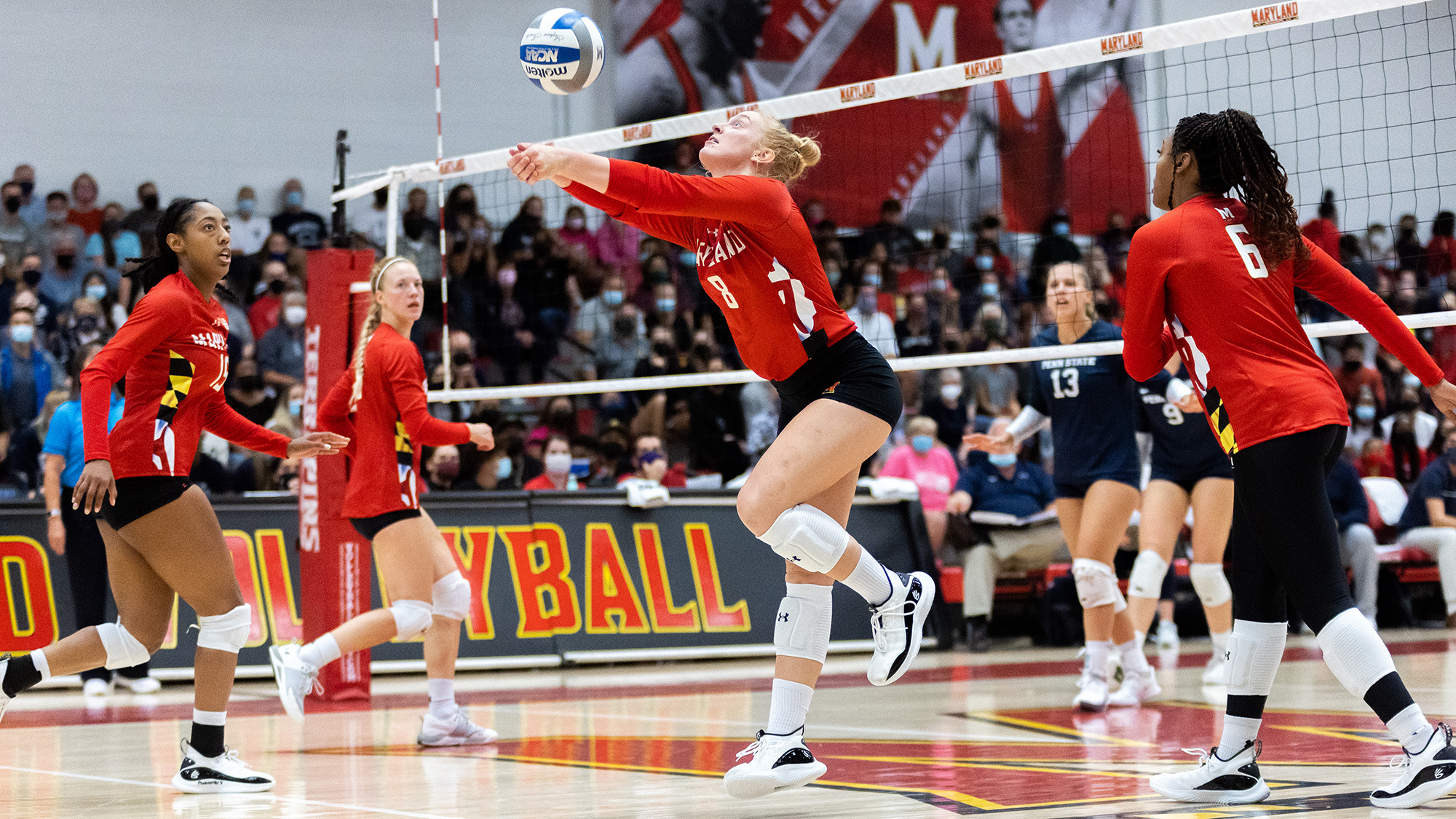 Outside hitter Paula Neciporuka flew down the middle of the court, hoping to connect on her 21st kill to extend a five-set thriller in College Park.

Neciporuka rose and fired, only to have her shot batted back by two Penn State defenders at the net for a match-winning block.

It was the culmination of a gritty win for the Nittany Lions, who rattled off three straight-set victories to knock off Maryland volleyball in heartbreaking fashion, 3-2.

“I think if you like watching volleyball, that was pretty good volleyball across the board,” coach Adam Hughes said. “Unfortunately, some of those bang-bang plays go the other way and I think the match would be a little bit different.”

Outside hitter Sam Csire led the early charge for Hughes’ squad, registering back-to-back kills on the first two points of the match. Feeding off of a packed Xfinity Pavilion crowd’s energy, Maryland rolled to an 8-3 first set start to force Penn State coach Russ Rose into burning an early timeout.

The Nittany Lions quickly responded out of the break, snagging the next three points to chip into the Terps’ early advantage.

But it wasn’t enough to quell a dynamic Maryland offense in the first set.

Logging an efficient .464 hitting percentage in the opening frame, the Terps coasted to a 25-19 first set victory. Outside hitters Csire and Neciporuka dazzled from the outside, each notching five kills to propel Hughes’ squad to a 1-0 lead.

[‘No gimmies’: Maryland volleyball is halfway through the most difficult stretch of its schedule]

“She knows that she’s undersized, but she’s been that player her entire career,” Hughes said of Neciporuka, who led the Terps with a season-high 20 kills on the evening. “I think [she’s] really helped some of the younger players see what’s possible and that you can be patient, you don’t have to go for the home run swing at all times.”

In stark contrast to Maryland’s dominant first set outing, the subsequent frame was much more of a slugfest between the Terps and Nittany Lions.

Both squads exchanged leads early, with neither team garnering more than a one point advantage until the tail end of the set. Penn State outside hitter Anastasiya Kudryashova began finding the holes in Maryland’s defense in the second set, registering five of her 17 total kills to lead the Nittany Lions’ offense.

But once again, it was the Terps that pulled through in the clutch.

With the second set knotted at 25, Csire found a lob from setter Sydney Dowler which she pummeled past Penn State’s defense to force a set point. With the crowd on its feet, Rainelle Jones and Laila Ricks walled a Jonni Parker spike attempt at the net to clinch a 27-25 second set win.

Now holding a 2-0 lead, the Terps found themselves on the brink of another historic win for the program for the second time in a week. However, the Nittany Lions wouldn’t go down without a fight.

[Maryland volleyball swept by No. 9 Minnesota for first loss of season, 3-0]

“They took a punch, they definitely took a punch with us and I feel like that kind of gave us a little shock,” Jones said.

And the Nittany Lions would continue to roll in the fourth frame.

After trading shots for the first half of the fourth frame, a service error by Quinn Menger knotted the set at 16 apiece. On the next point, Kudryashova connected on a booming spike past multiple Maryland defenders to give the Nittany Lions a one point lead.

A kill that would prove fatal for the Terps in the fourth set.

And with two straight sets under their belt, the Nittany Lions wouldn’t be denied in the pivotal fifth set. After a controversial call pushed Penn State’s fifth set advantage to four, Kaitlyn Hord connected on the final block of the evening to give the Terps their second straight loss following a 13-0 start.