Maryland volleyball swept by No. 9 Minnesota for first loss of season, 3-0 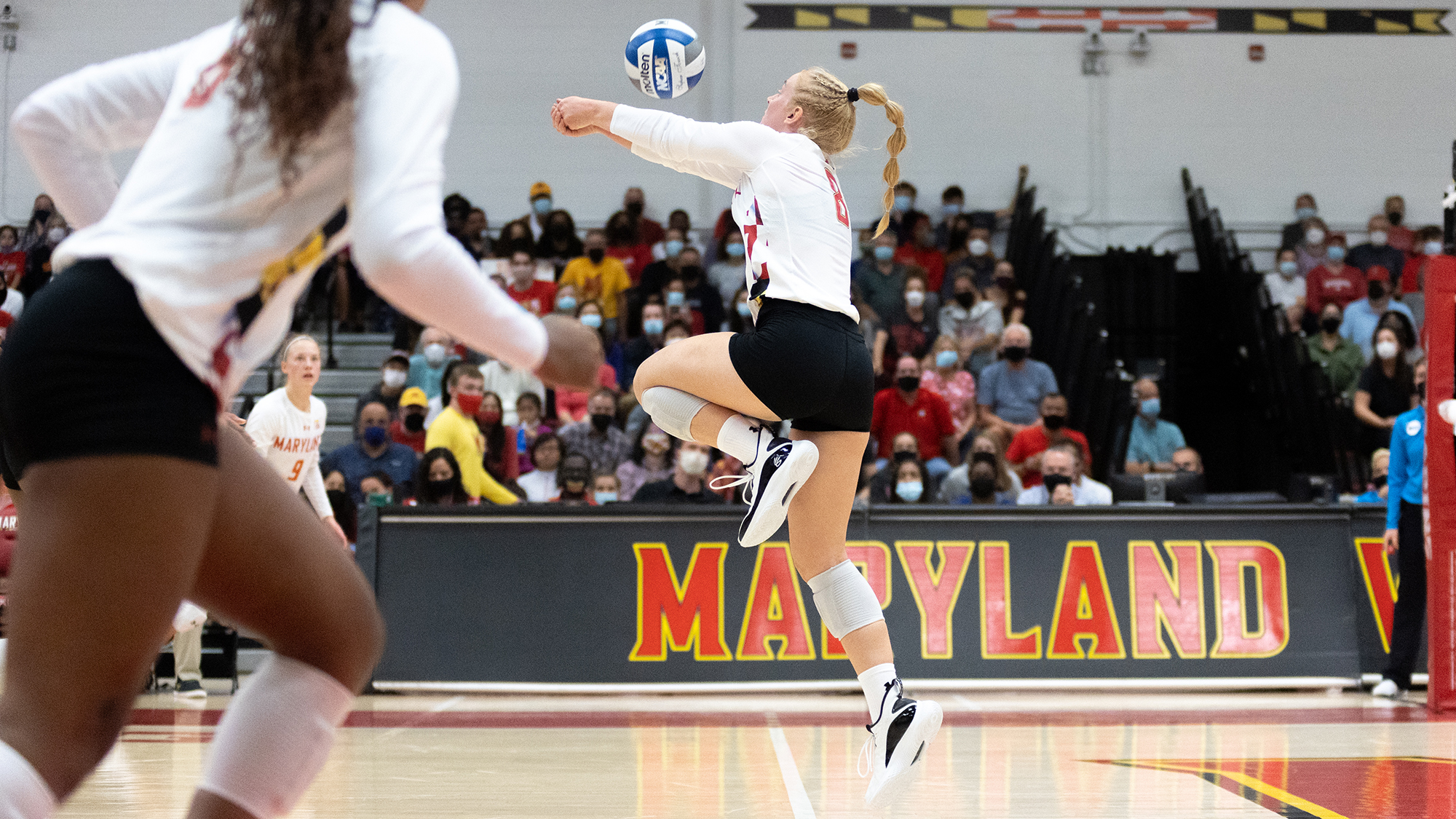 Paula Neciporuka sent a spinning spike attempt over the net, hoping to cut into a late Minnesota lead from the left side. Neciporuka’s hit was tipped by two Minnesota blockers at the net, then directed over to Ellie Husemann who sent a momentum-crushing kill past Maryland’s block.

It was one of 37 putaways for No. 9 Minnesota, which gashed Maryland volleyball’s defense en route to a 3-0 victory, the Terps’ first loss of the season.

“They came out ready to play from the very first point,” setter Sydney Dowler said. “They clearly wanted that one.”

The Gophers, who were coming off of a five-set victory of their own against Michigan on Friday, struck first in the opening set at Maturi Pavilion.

Spurred by a trio of Minnesota block assists, coach Hugh McCutcheon’s squad garnered an early three-point advantage. The Gophers’ defense was stifling to open the contest, racking up six blocks to hold a once-potent Maryland offense to a -.167 hitting percentage.

And Minnesota’s lead would only grow following the break.

The Gophers took a massive advantage late in the frame after a flurry of Maryland attack errors blew the set wide open. After an attack error from outside hitter Sam Csire pushed Minnesota’s lead to double-digits, back-to-back block assists from Stephanie Samedy and Husemann clinched a dominant 25-13 first set victory for the No. 9 Gophers.

“I thought we probably gripped it a little too tight to start, and got a little high-error and made some miscues from our side of the net,” Hughes said. “[Minnesota] did a good job managing the game.”

Minnesota’s dominance spilled over into the second set.

The Gophers opened the set at a blistering pace, scoring 11 of the first 14 points of the frame. Minnesota spread the wealth around, gashing Maryland’s block with an array of kills from Samedy and Jenna Wenaas to put their foot on the undefeated Terps’ necks.

Maryland, on the other hand, was unable to string together a consistent attack in the second set. The Terps followed up a 14-error first frame with 14 more in the second, as Minnesota built a 22-8 lead deep into the second frame.

Maryland showed signs of life late in the set, as a Neciporuka putaway spurred a 3-0 mini-run for Hughes’ squad. But moments later, another spike by Samedy put an end to a commanding 25-12 second set victory, the Terps’ worst set defeat of the season.

“I thought Minnesota did a good job of just having us pretty well scouted,” Hughes said.

Now just one set away from its first loss of the season, Hughes’ squad showed fight to close out the contest in the third set.

Neciporuka, who led the Terps with 10 kills on the afternoon, pitched in two early spikes to give Maryland a rare lead early in the third frame. Going back and forth with the Gophers, the Terps showed flashes of the dominant offense which they brought in their upset of No. 2 Wisconsin Friday.

But Minnesota quickly proved too tough to handle.

Converting 16 kills to just one attack error in the third set, the Gophers quickly dissolved Maryland’s advantage. Samedy continued to dazzle, starting a 4-0 Minnesota run with a  high-flying putaway past multiple Maryland blockers.

Back-to-back Taylor Landfair spikes pushed the game to match point. And after Samedy’s 11th kill of the afternoon was pushed past the Terps’ defense, Maryland had suffered its first loss of the season on the road in Minneapolis.