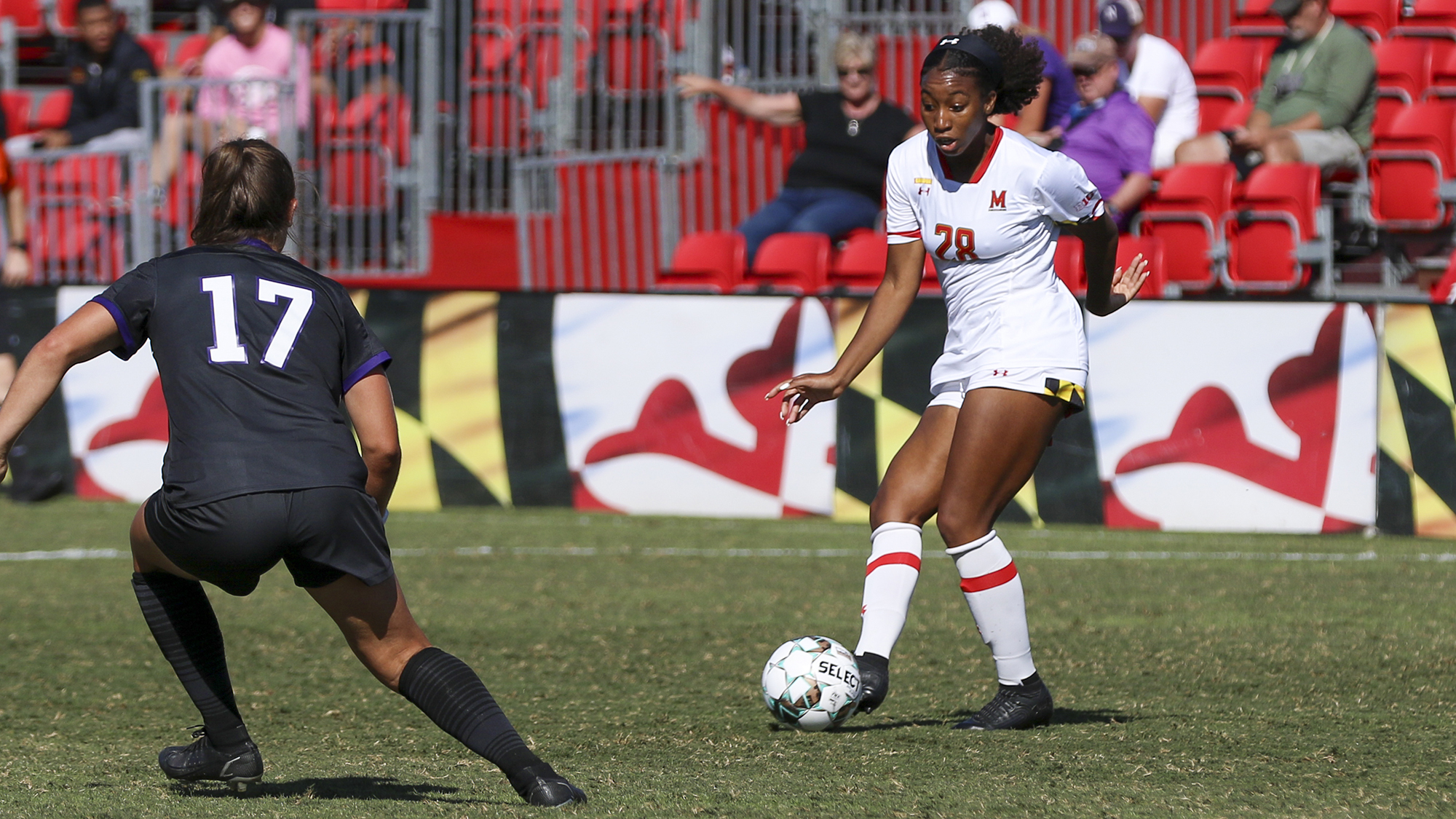 Maryland women’s soccer was chasing an equalizer, but all it took was a long ball from Iowa’s Sara Wheaton and a calm finish from Alyssa Walker to dash the team’s hopes.

The Terps’ winless streak hit seven as they struggled to create anything going forward against a physical Hawkeyes side. Iowa’s press thwarted Maryland in possession throughout the 2-0 loss.

Toni Domingos almost gave the Terps the lead in the 8th minute with a great half-volley, but Iowa goalkeeper Monica Wilhelm was able to parry it away for a Maryland corner kick.

The Terps continued to be on the front foot at the beginning of the first half before they started to give the ball away cheaply in the midfield due to the Hawkeyes’ press.

Iowa took advantage of this and grew into the game before scoring the opening goal in the 34th minute.

Addie Bundy played a long pass forward to Hailey Rydberg, who brought the ball down and drove at Maryland’s defense. Her low-driven shot from just outside the box hit the post and found the back of the net.

The goal gave the Hawkeyes the lead at halftime, as the Terps struggled to do anything going forward. Maryland failed to register a single shot in the last 31 minutes of the first half.

Leone was disappointed with his offenese’s performance, but thought they did what they could in difficult circumstances, as Iowa committed 17 fouls and only saw one yellow card.

“We were having a lot of success on the flank, and we just didn’t get the numbers in the box,” Leone said. “It’s frustrating to have [17] fouls against us and only one card, because basically everyone’s just grabbing them every time they get the ball, and they’re fighting off of it so strongly that you can’t even tell it’s a foul, but it is. It looks like it’s a water polo game.”

The Terps nearly equalized spectacularly in the 55th minute, but Tori Paul’s long free kick glanced off the top of the crossbar.

Paul made the longest appearance of her Maryland career, notching 39 minutes and three shots while playing at center mid.

Leone was satisfied with the sophomore’s performance, and thought it was one of the upsides of a rather disappointing match.

“She did well, she worked hard, she was creative.” Leone said. “We finally got a corner kick when she was on the field and she’s very good at that, so that part was promising.”

Iowa had a prime chance to extend its lead in the 70th minute, but Terps keeper Madeline Smith was able to deny Rydberg her brace from close range. Smith played the entire 90 minutes for the first time this season, as her and fellow transfer Liz Brucia have split time in net since Smith was cleared to play before the Penn game.

It looks like the pair will continue to split time in goal and will switch off playing full games.

“We’re just trying to keep them fresh,” Leone said. “We will pretty much start Liz on Sunday and do the same thing.”

The Terps were chasing an equalizer, but the Hawkeyes put the game away in the 85th minute when Walker brought down a long ball from Wheaton and found the bottom corner, giving Smith no chance of saving her strike.

The late goal would be enough to give Iowa a 2-0 win and extend Maryland’s winless streak to seven. The Terps struggled to deal with the Hawkeyes’ physical play, failing to play through Iowa’s high pressing.

Maryland will hope to fix its sputtering offense and break its winless streak as it heads to Illinois on Sunday, a side that is rooted to the bottom of the Big Ten standings.

“You always got to get some points on the road,” Leone said. “We’re going for broke on Sunday, that’s for sure.”