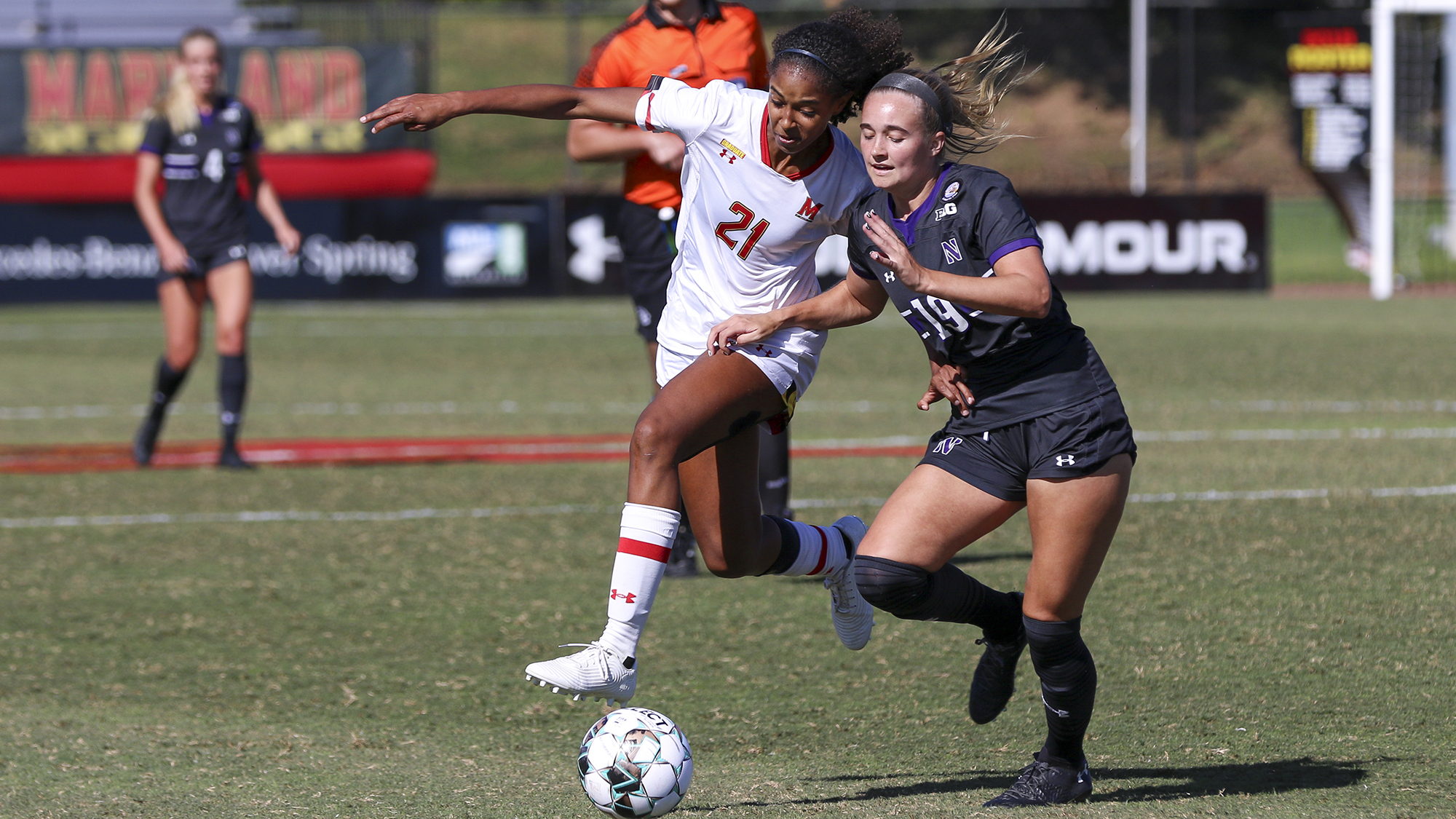 Kori Locksley battles a defender for the ball during Maryland women's soccer's 1-1 draw with Northwestern on Sept. 26, 2021. (Cam Andrews/The Diamondback)

Despite positive performances throughout its first three Big Ten games, Maryland women’s soccer has yet to break its winless six-game streak.

The Terps looked like the better side in both matches last week against Nebraska and Northwestern, but failed to get in the win column, drawing both games.

Maryland has been unable to generate a lot of quality attacking chances, save for one well-built goal against Northwestern.

Now, they’ll look to break their dry spell on the road this week, as the Terps travel for their first Big Ten away matches at Iowa and Illinois.

And coach Ray Leone is hoping his team starts by creating and taking better shots.

“[We’re] just trying to get closer in and have a better selection of shots,” Leone said. “It’s almost like basketball, it’s not just getting the shots, it’s getting a high-percentage shot.”

Maryland has also failed to close out opponents, conceding late goals against Ohio State and the Wildcats and costing the Terps critical points early in their conference schedule.

While Leone has praised his team for many of their early performances, he says improving late-game play is important for Maryland moving forward.

“[A key focus is] finishing the game and playing all the way down to the very last second of every single segment,” Leone said. “We’re playing so much better. When you watch it, it’s very disappointing because we did enough to get the three points.”

The Terps are almost back to full strength, with Alyssa Poarch, Emily McNesby and Adalee Broadbent all returning to action last week. However, Poarch did exit the game against Northwestern and is questionable to play this upcoming week.

Broadbent returns to the fold in a new position, operating in central midfield as the defense has developed a lot of chemistry during her couple games out.

Maryland will look to avenge last year’s heartbreaking overtime loss against the defending Big Ten Tournament champions in the Hawkeyes.

Leone isn’t out for revenge though, just a good performance and the Terps’ first conference-win of the season.

“I just think it’s important for us to focus on us,” Leone said. “[Big Ten opponents] are all good. So, you know, does one matter more than the other? No, it’s the next one. The next one is the most important.”

Iowa suffered a similar fate to Maryland on Sunday, conceding an equalizer with just 19 seconds remaining, before losing in overtime to Purdue. The Terps conceded an equalizer of their own with just 23 seconds left against the Wildcats, but were able to hold out for a draw.

Both games will surely be tight with Maryland (0-1-2, Big Ten), Iowa (1-2, Big Ten) and Illinois (0-3, Big Ten) all sitting outside of the qualification spots for the Big Ten Tournament as the halfway point of the conference season approaches.