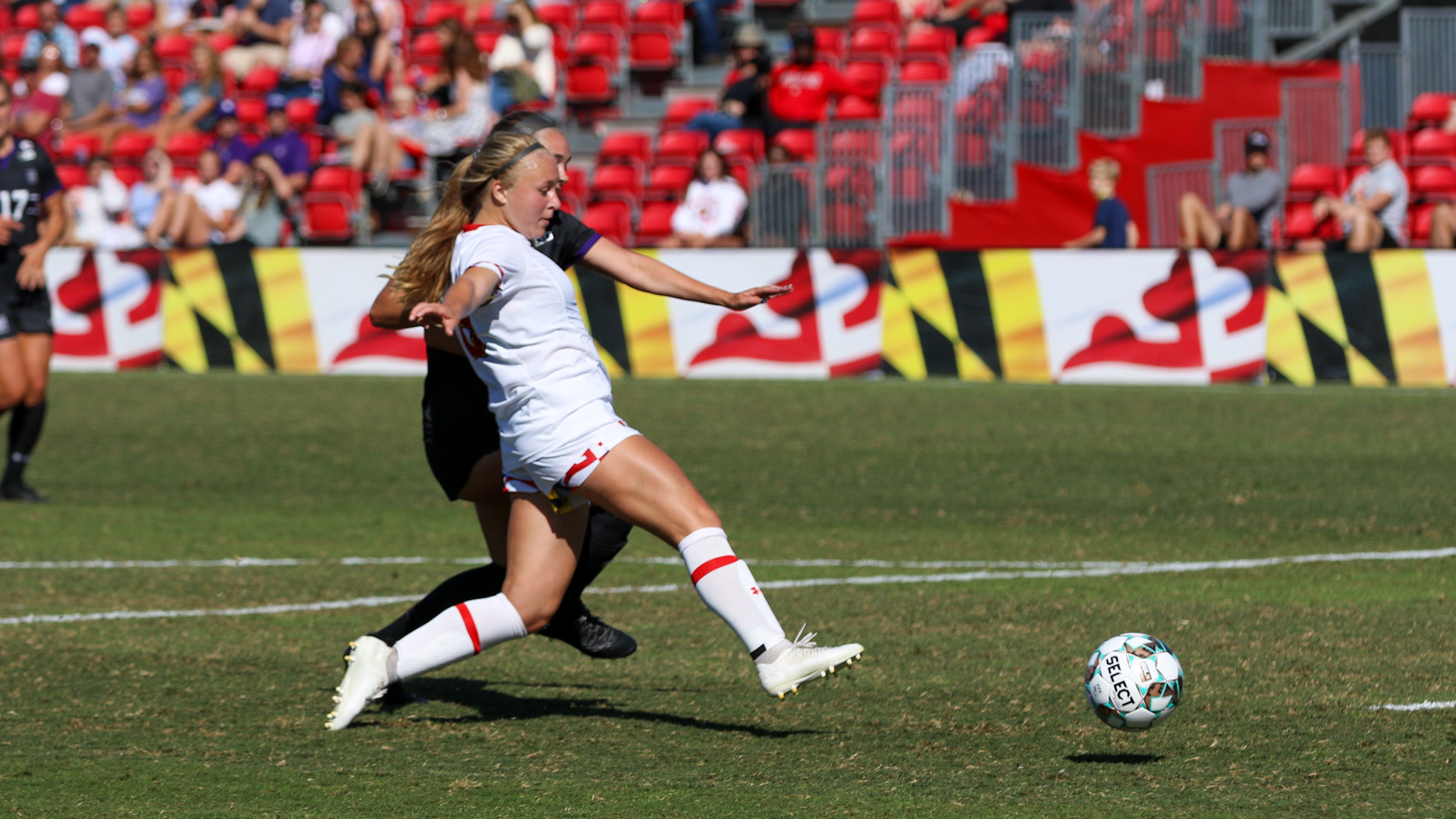 Loren Sefcik shoots past a defender to score during Maryland women's soccer's 1-1 draw with Northwestern on Sept. 26, 2021. (Cam Andrews/ The Diamondback)

Maryland women’s soccer’s Zora Jackson intercepted a Northwestern pass and fired the ball right to Loren Sefcik. She found Alyssa Poarch with a first-time pass around midfield and made a darting run forward as Poarch carried the ball upfield herself.

Poarch looked up and spotted Sefcik’s run, threading a perfect through ball into the midfielder who only had to touch past the Wildcat’s onrushing goalkeeper to give the Terps the lead early in the second half.

While the goal looked like it would be enough for Maryland to break its winless streak and earn its first Big Ten win in just over 700 days, a late Northwestern equalizer sent the game to an overtime period. Neither side could find the winner, playing to a 1-1 draw.

Despite conceding and dropping points late once again, coach Ray Leone thought the team played very well throughout the match.

“Their performance was at a high level, probably the highest level we’ve played in five years,” Leone said. “I’m very proud of them to do that after an overtime game and really push the envelope pretty much throughout the game.”

The Terps’ best chance of the opening half came in the 13th minute, when Leone’s squad earned a free kick just outside the box for a handball. Poarch’s strike almost found the bottom corner, but Mackenzie Wood was able to parry it away.

The Terps were able to get in behind the Wildcats’ defense in the 35th minute, but Toni Domingos’ touch was too heavy and Wood was able to come out and stop the freshman from getting a shot off.

The run of play was indicative of a lot of Maryland’s problems in the attacking end throughout the season. The Terps held 63% of possession and were able to get forward and keep the ball in the forward third, but were unable to create a lot of dangerous chances.

“There was good spacing,” Leone said of his offense. “Good ball movement, good spacing, I mean it looks like the game was fun today… The game was really a good game for both teams.”

Maryland didn’t allow a shot on target from Northwestern in the first half, and finished the period with four shots on target of their own. But the Terps had nothing to show for it, with the sides going into the break tied 0-0.

Maryland carried its first half momentum into the beginning of the second, and the Terps were able to score the opening goal in the 53rd minute.

Sefcik and Poarch combined well before connecting on the ball to Sefcik, who’s first time finish gave Maryland the lead.

“AP and I were working really well up top together,” Sefcik said. “And we ended up finding one in the back of my mind, so that was exciting.”

[Despite solid goalie play, Maryland women’s soccer wants to clean up its defense]

Northwestern almost responded immediately as the ball fell to Rowan Lapi inside the box, but despite striking well, her shot went wide as the Wildcats missed a big chance to equalize.

The Terps looked well on their way to their first conference win in 703 days, but Olivia Stone put a cross in and an unmarked Francesca Docters popped up at the back post and finished with just 23 seconds left, sending the game to overtime.

Neither side could find a breakthrough in overtime, as the Terps conceded a late goal in their second straight game, to draw 1-1 against Northwestern. The tie is Maryland’s fourth in its last six games, as its winless streak extended to six games.

The Terps will hope to move on from the draw quickly, as Maryland has three important and challenging home games coming up.

“Well, you just got to put this heartbreak behind us quickly because if they don’t, we’re not going to do what we want to do,” said. But the performance, you can’t take that away. The performance was phenomenal.”