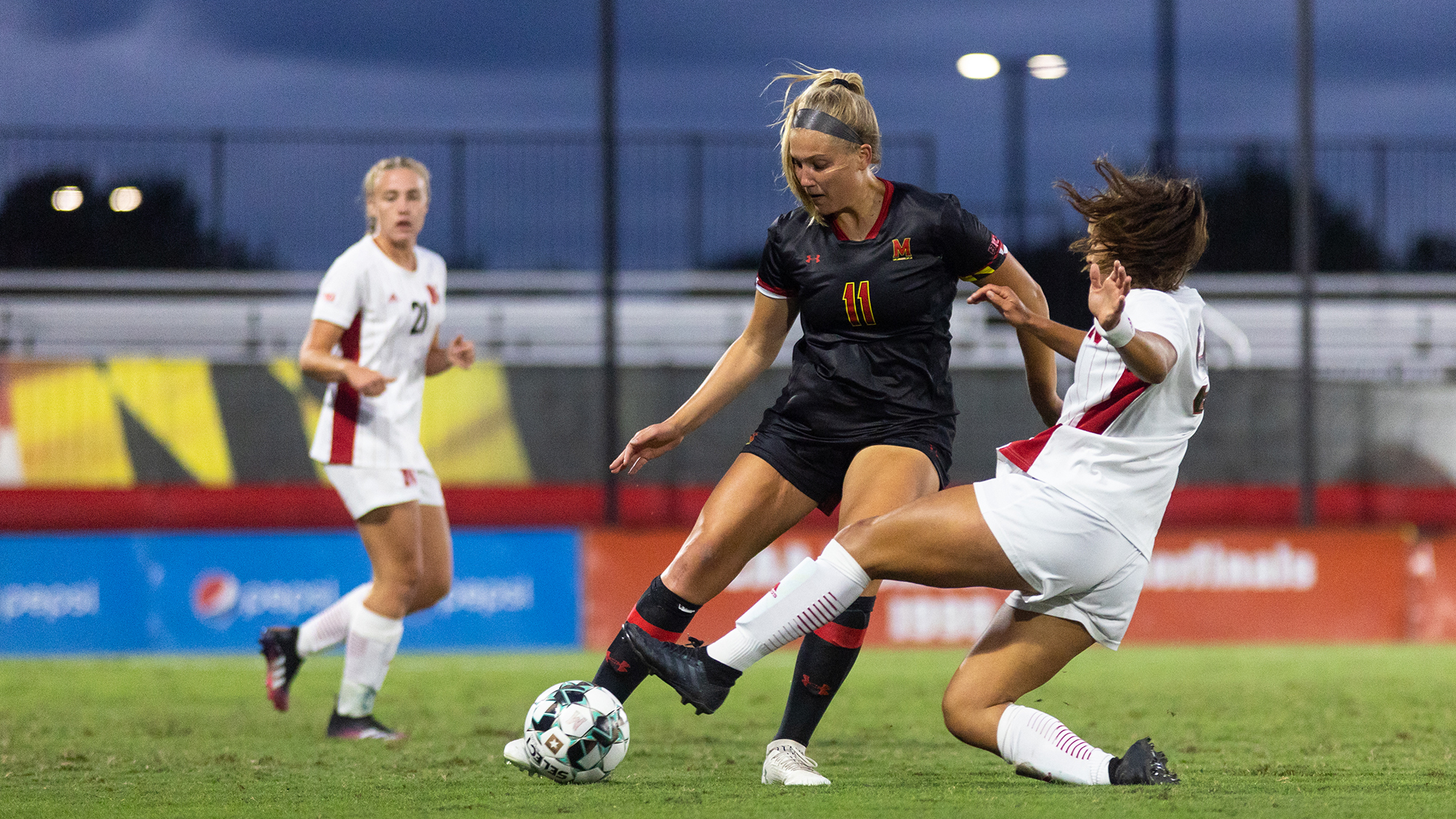 Maryland's Brooke Weston tries to dribble around a sliding Nebraska defender during the Terps' and Cornhuskers' 0-0 draw on Sept. 23, 2021. (Julia Nikhinson/The Diamondback)

Maryland outshot the Cornhuskers, 15-10, but its poor shooting cost the Terps a crucial three points in Big Ten play.

“It’s extremely disappointing for us,” Catherine DeRosa said. “We’re still looking for our first big time win of the season, but there were a lot of positive things to take away from this game, so we’re hoping to build off of that going into Sunday’s game against Northwestern.”

Maryland almost took the lead just five minutes in, after Loren Sefcik played a great lofted pass over Nebraska’s defense to Kori Locksley. Locksley was able to get a touch to the ball, but her first-time effort was saved by Samantha Hauk.

The Cornhuskers almost took the lead in the 25th minute, but Eleanor Dale’s looping header from Jordan Zane’s long-ball hit the inside of the post and bounced out.

The Terps had another high-quality chance to take the lead in the 37th minute. Toni Domingos won a header and spotted Hauk off of her line, but Domingos wasn’t able to get her shot on target.

[Despite solid goalie play, Maryland women’s soccer wants to clean up its defense]

Neither side was able to strike in the first half, despite Maryland having a majority of possession and a 5-2 advantage in shots.

The Terps’ best chance came in the 57th minute, when Mikayla Dayes beat her defender and squared the ball to Sefcik. However, the midfielder could only put her shot over the bar as Maryland missed another big chance.

Nebraska grew into the game as the half went on, and Grace Brown forced a good save from Madeline Smith from a free kick in the 76th minute.

“We literally have nothing to worry about back there,” Malikae Dayes said.

The Cornhuskers were almost able to steal the match late with a header from a corner but couldn’t convert, and a scoreless 90 minutes would see the sides head to overtime.

The Terps created a couple of solid chances in the first overtime period but weren’t able to find the golden goal.

Nebraska had a strong chance to find the winner in the 105th minute when Sarah Weber got in behind Maryland’s defense, but her shot was right at Smith, who was able to make an easy save.

Mikayla Dayes almost found the game-winner for the Terps two minutes later, but her left-footed shot went just over the bar.

Despite a glut of opportunities in overtime, neither side could find a goal. The draw extended Maryland’s winless run to five games, with the Terps going 0-2-3 in that span.

Maryland’s defense was solid all night, and coach Ray Leone said he was impressed with the Terps’ performance on that end.

“The level of concentration,” Leone said. “I think we saw a couple late chances, and we got caught in the last game. To play 110 [minutes] and really keep our focus defensively was a big step for our team.”

Yet, the Terps hope to see their offense improve in the coming days, as Maryland has now only been able to score two goals in its last five games.

“We had some chances, and we’re just rushing it,” Leone said. “We’re just going to have to take a breath when we get near the box, because I think we’re taking shots from too far out.”