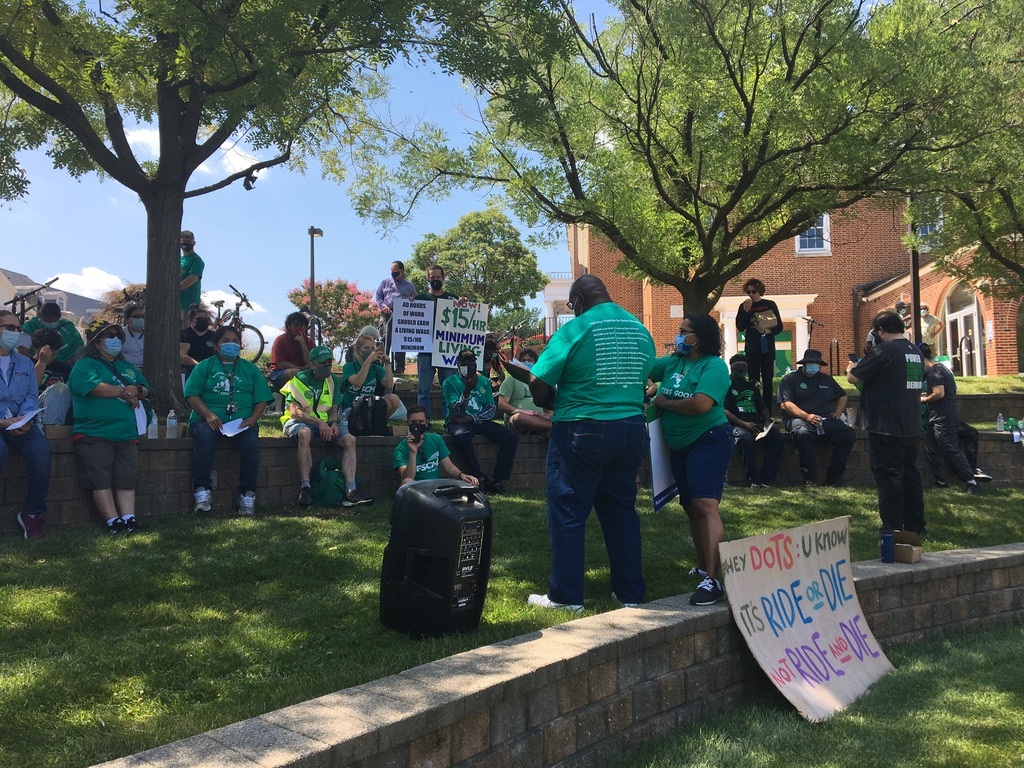 Scores of people gathered near the Stamp Student Union on Aug. 5, 2021 to demand a $15 minimum wage, pandemic hazard pay and expanded telework. (Shifra Dayak/For The Diamondback)

Antoine Peterson, a housekeeper at the University of Maryland, said he gets paid $12.66 an hour. Some days, after paying his bills, he’s left with hardly any money to put food on the table or purchase necessities like shoes for his grandchildren. And he wants things to change.

Peterson was one of over 100 community members who attended a rally organized by the American Federation of State, County and Municipal Employees Council 3 Thursday at this university.

At the rally, employees from the University System of Maryland demanded that the unions should be able to negotiate one master bargaining contract, applicable to all system institutions. In the contract, they want to see a $15 minimum wage, pandemic hazard pay and expanded telework policies established for all university workers.

Employees have been fighting for those measures for months. Frontline state employees who have been required to report to work in person throughout the pandemic receive hazard pay — extra financial support — through the state. However, higher education employees who fit that description have not received any hazard pay. Under the current policy, where supervisors can make blanket determinations about telework for their departments, some employees haven’t been granted telework either.

In April, the Maryland General Assembly passed a bill that would have allowed for bargaining to happen through one contract on a systemwide level, rather than through each individual university under the system. Gov. Larry Hogan vetoed the bill, but it is likely that both chambers of the legislature can override the veto — so workers are still fighting.

“We all do the same thing. We don’t need 16 different contracts from one agency,” said Debbie Michaels, a program management specialist at the University of Maryland Baltimore County’s Department of Information Technology, at the rally.

Currently, some workers at the University System of Maryland schools make less than $15 an hour, leaving them struggling to provide for themselves and their families, especially during the pandemic.

“On the Eastern Shore, we cannot support a family on less than $15,” said Relford Matthews, who works at the University of Maryland Eastern Shore and serves as a regional vice president for AFSCME Council 3. “We’ve worked too hard through this pandemic [to not] get the respect that we deserve.”

Workers at this university expressed similar sentiments. Some referenced the increasing cost of living in the Washington metro area.

Iris Castro, a housekeeper who has worked at this university for 13 years, earns $12 an hour, which is not enough for her to pay for insurance, rent and other expenses while supporting her family, she told The Diamondback in Spanish through a translator.

Student workers also joined the fight for a $15 minimum wage.

Many student workers on campus make $11.75 an hour, said Michael Marinelli, a student at this university. Others, like Marinelli himself, are not paid at all, and are instead compensated with room and board, Marinelli said — a policy he thinks is unfair during the pandemic, when dorms and communal bathrooms can be grounds for COVID-19 transmission.

“Student safety is worker safety,”said Marinelli, a senior in his fifth year of college majoring in English. “Students at UMD are workers too and would benefit from this hazard pay like any other worker on campus.”

At the rally, university system employees also continued calls for pandemic hazard pay. Many frontline university workers were required to report to work in person during the pandemic, which increased their risk of contracting COVID-19. Despite this,  they have not received the same financial compensation as other state employees.

“If a nurse is a nurse for the state of Maryland and gets hazard pay, a nurse working on this campus swabbing noses, doing all of the COVID-19 testing throughout the pandemic, she also deserves hazard pay,” said Celina Sargusingh, the clinic coordinator for this university’s health center and the vice president of AFSCME Local 1072.

The university system workers also spoke out in favor of expanded telework allowance, an issue that has existed since before the pandemic but has picked up speed in recent weeks as a full-time, in-person return to campus looms for all employees.

In a petition that AFSCME delivered to university administration last month, the union demanded acceptance of case-by-case requests for telework and a minimum of three days of telework per week for all employees who wanted it.

Lower-income workers and workers of color have seemed to be hardest-hit by non-flexible telework policies, Jennifer Patterson, the assistant director at this university’s arts and humanities college, said at the rally.

As university system workers continue to advocate, AFSCME will continue to fight on their behalf for a single bargaining contract and better treatment, said Todd Holden, AFSCME Local 1072’s president.