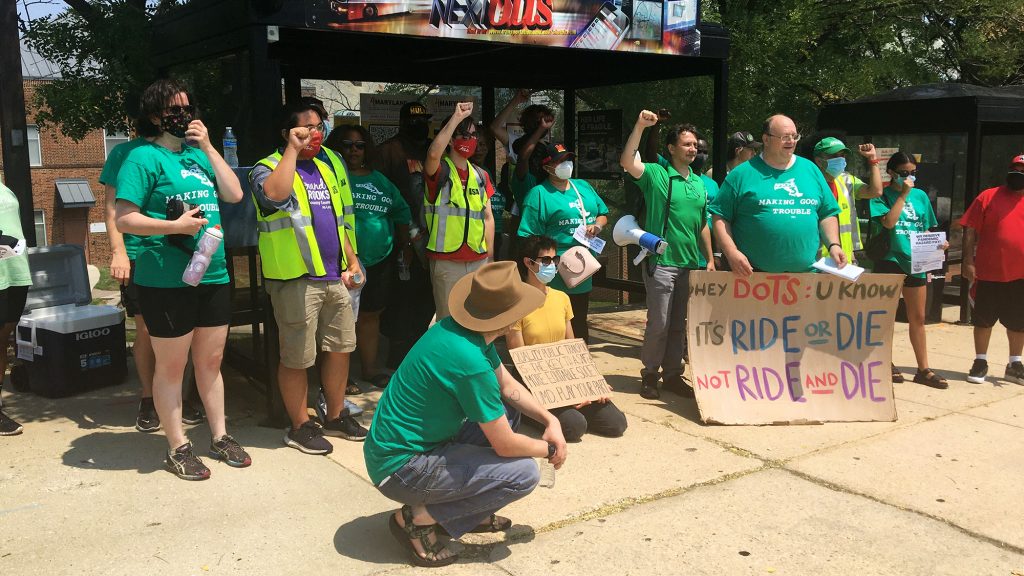 More than 50 people gathered to protest for better maintenance of buses and hazard pay for DOTS employees on July 28, 2021. (Shifra Dayak/For The Diamondback)

Standing at the bus stop in front of Stamp Student Union on Wednesday, Jakeetah Alston-Ali’s voice reverberated through a megaphone: Transit operators at the University of Maryland are “tired of feeling underpaid and left behind,” she proclaimed.

Alston-Ali is a bus driver for Shuttle-UM, the bus system operated by this university’s Department of Transportation Services. She was among the more than 50 people — including other drivers and bus riders — who gathered for a protest against cuts to Shuttle-UM routes over the summer and for better maintenance of buses and hazard pay for DOTS employees.

The protest was the second this month organized by the American Federation of State, County and Municipal Employees Local 1072, the union that represents this university’s employees. And in both protests, university employees made their point clear: They feel the university is not doing enough for its workers.

“They have the money, they have the resources. It’s the political will from the higher-ups, they’re not willing to do it,” said Nathan Sparks, another Shuttle-UM driver. “That’s what we’re here to push back against.”

Some of the issues addressed at Wednesday’s protest have existed for several years, Sparks, who has been driving for Shuttle-UM since 2013, said in an interview with the Diamondback on Tuesday.

Despite contractors working to clean and disinfect Shuttle-UM buses, they are “dirtier than ever,” said Sparks — an issue that has been especially concerning during the pandemic.

But come August, the contracted workers won’t clean the buses anymore, Sparks said. As of now, he said, the university’s Department of Transportation Services has not expressed any plans to hire full-time cleaning staff as a replacement.

[Here’s how Shuttle-UM routes are changing this fall]

The university told some drivers that they had to clean their own buses to save time, Alston-Ali said.

The union is demanding better cleanliness for buses. To Sparks, that means hiring at least two bargaining unit members as full-time cleaners and giving them proper training and fair pay.

For Vilma Diaz, also a Shuttle-UM driver, maintenance issues don’t stop at cleanliness. Many of the buses’ radios do not work properly, Diaz said, which could present safety issues if a driver ever needs to contact emergency services.

In a survey of 34 Shuttle-UM staff conducted by the union in June, employees complained about faulty bus mechanisms, including horns that don’t work, having to stand on brakes to get the bus to stop or slow down and mirrors that moved out of place while buses were in motion.

Shuttle-UM drivers have driven buses through most of the pandemic, including before COVID-19 vaccinations were available. Yet, many of the drivers say they haven’t received hazard pay.

In April, Gov. Larry Hogan allocated $100 million for some state essential workers to receive additional pandemic-related support. But this only applied to workers who had already received the benefits, so many workers at University System of Maryland institutions were excluded from receiving the money — which left Shuttle-UM drivers, among others, frustrated.

“We [were] here during the pandemic, we [were] running buses, we didn’t complain. We showed up on time, we did all our routes,” Earnest Izzard, another Shuttle-UM driver, said after the rally. “The one thing we’re looking for is somebody to help us out.”

In a statement, this university said it “looks forward to productive talks” regarding hazard pay for university workers with AFSCME in collective bargaining sessions.

Drivers are not the only ones frustrated. People who use Shuttle-UM to get around campus were also at the rally sharing their experiences with reduced bus service and cut routes.

During the summer of 2019, Shuttle-UM was operating 13 routes. This summer, two routes are in service.

For Brian Crawford, a digital media coordinator for the arts and humanities college, commuting to campus used to take about 30 minutes on the 111 Shuttle-UM bus. But since DOTS cut most shuttle service on and around campus for the summer, it takes Crawford closer to 90 minutes to commute, he said.

Leslie Lindsey, who works as the senior instructional designer at this university’s business school, does not own a car and relies on Shuttle-UM to get her around campus, she said in an interview Wednesday. She is expected to return to campus in person next week.

With full shuttle service, her commute to the university was an hour and 15 minutes each way. Now, she expects it to be a four-hour round trip, with three transfers each way, she said.

“As we begin our return to campus this fall, we are glad to announce that we are running all of our bus routes,” the statement reads.

For the Shuttle-UM drivers and AFSCME members, voicing their concerns continues to be important.

“If you don’t put pressure on these folks, they will walk right over you,” Sparks said. “We’re trying to put pressure on management to say, ‘Hey, we’re not going to sit idly by while you trample all over us.'”