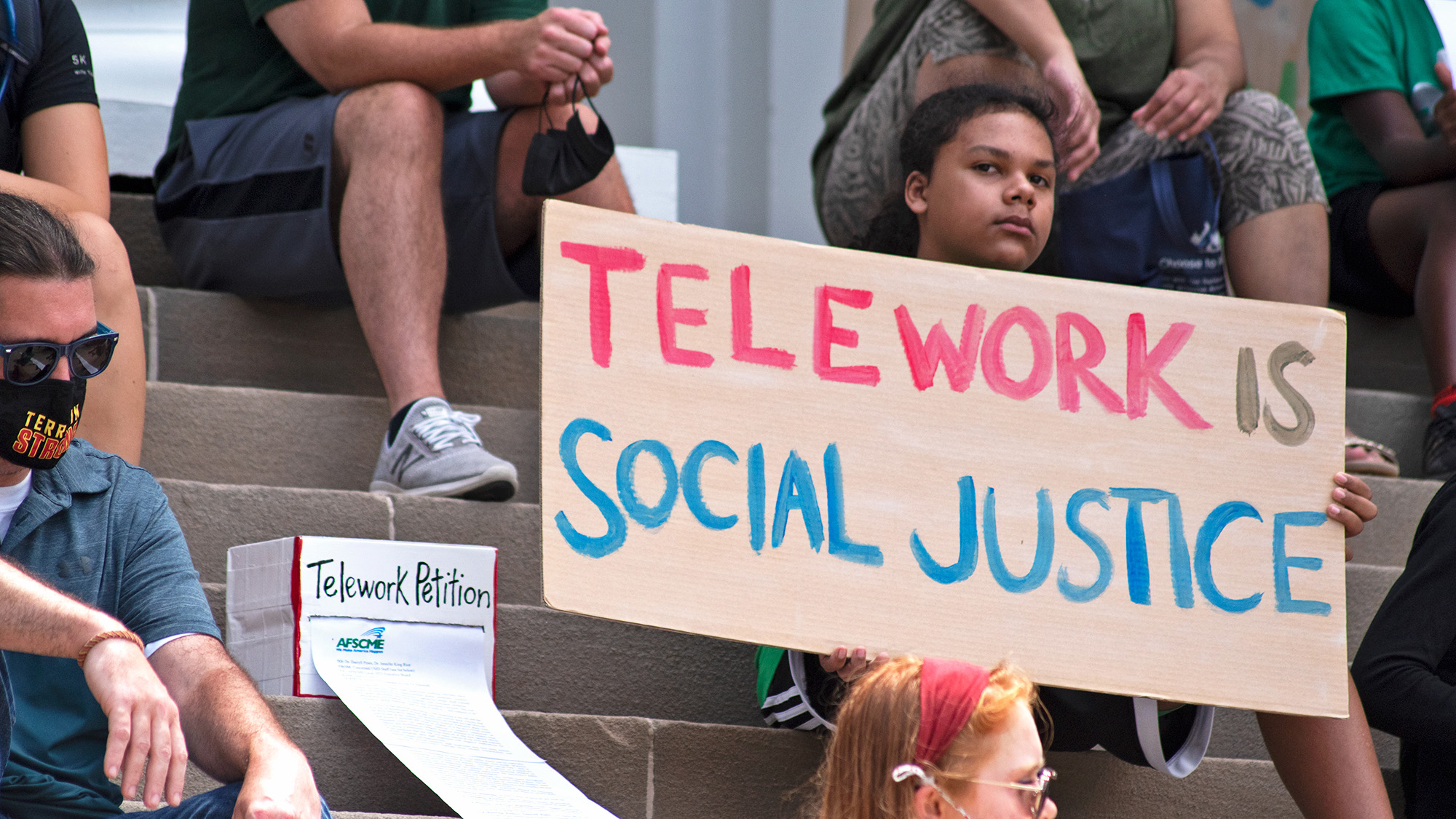 Petitioners demonstrate outside of the main administration building on July 13, 2021. (Autumn Hengen/The Diamondback)

In the blazing midday heat Tuesday, impassioned chants of “Office workers are ready to fight!” and “UMD, do what’s right!” echoed from the steps of the University of Maryland’s main administration building.

Seventy-five university community members had gathered in front of the building to protest — organized by American Federation of State, County and Municipal Employees Local 1072, the union that represents employees at this university — against what they deemed a lacking response from the university regarding requests for telework.

The protest was the latest rallying cry for more flexible telework policies from community members and AFSCME, which has voiced concerns about the university’s treatment of workers during the pandemic.

At Tuesday’s protest, attendees placed a long piece of paper across the steps of the administration building. It was a petition — now with almost 600 signatures — that has been in the works for more than a month.

The union first delivered the petition to university President Darryll Pines and now-provost Jennifer Rice in mid-June, when it had about 550 signatures. In the petition, the union called on the university administration to extend telework through the end of the summer, rather than requiring certain employees to come back in person before August.

The petition also called for at least three days of allowed telework per week for employees who want it.

Speaking out against departments and supervisors issuing “blanket determinations for telework” — a policy that has existed since before the pandemic — AFSCME also demanded that workers be able to make case-by-case requests for telework.

Upon initially receiving the petition, the university responded saying it would be willing to discuss telework policies during a full bargaining session, a move that Holden said ignores the urgent and time sensitive nature of the issue because it could be a long process.

During Tuesday’s protest, AFSCME tried to deliver the petition again but the administration building’s doors were locked, leading to boos from the attendees.

In a statement, the university cited its recent collective bargaining agreements with AFSCME, which include provisions for telework.

“Campus unit leaders continue to consider employees’ requests for telework, and many divisions have already expanded telework options for staff,” the statement read. “To further support employees, the University has expanded family care resources to meet the various caregiving needs of our employees.”

In March, the university expanded child care and family care benefits by offering some employees free premium memberships to Care.com — a caregiver search service — as well as access to subsidized in-home and in-center care providers and partial reimbursement for providers in an employee’s network.

But the university’s response has been insufficient, some employees said, and they say the telework policies dismiss their child care needs.

Solomon Comissiong, the assistant director for student involvement and public relations at Nyumburu Cultural Center, has been largely working remotely since the pandemic started, which has allowed him to take care of his two young children.

Comissiong, who is also the president of the Black Faculty Staff Association at this university and an executive committee member at-large for this university’s American Association of University Professors chapter, found out he would be expected back in person in August. In mid-May, he submitted a request for telework and said his department responded more than a month later that he could telework four days each week. It’s an improvement from the original guidelines, but it’s still frustrating, he said.

“It just doesn’t make any sense at all,” he said. “Those folks that have children should be allowed to continue to work remotely, at least until the start of the semester.”

For others, the scramble to find child care has been happening for months.

Wendi Adams, an accounting clerk in this university’s Department of Transportation Services, has been reporting to work in person since last July. When she can’t find a friend or grandparent to watch her kids, who are 6 years old and 14 years old, they stay home alone. During the school year, she would often get calls from their school during the day, which she would have to juggle with her job, she said.

Adams submitted three telework requests so she could stay home with her kids. The first two were denied, she said. After submitting the third one with AFSCME involvement, her department allowed her to telework one day each week.

“I practically was pleading for telework, and I was met with ‘You don’t qualify’ … I felt very insulted by it, disappointed by it,” Adams said.

Yolanda Kerr, a technology transfer coordinator in this university’s technology commercialization office, used to work a second part-time job to make ends meet. She lost the job during the pandemic, and the ability to telework helped her save money on gas and parking, she said at Tuesday’s protest.

“This past year has placed significant financial challenges on so many people, and just because things are reopening, it does not mean things have gone back to normal,” Kerr said.

For some, including Linda Dye, transportation-related concerns don’t just end at cost.

The College Park Metro station is closed for construction until early September, fewer university bus routes are operating during the summer and biking and walking has been deemed risky in some areas. As a result, there are fewer public and eco-friendly transportation options to get to campus, meaning employees who are required to report in person have to drive, Dye said.

To Dye, who is a public inquiry coordinator in the Department of Resident Life, this is at odds with the university’s claimed commitment to sustainability.

“The university talks a big game about sustainability and how we want to have zero emissions and how we want to be a green campus,” Dye said. “A good way to show that commitment is to have multiple days of telework a week for all people who can do their jobs from home.”

From the start of the pandemic until June, Dye had been working remotely. Last month, she started going back to the campus in person two days a week. Dye enjoys working, but as someone who sometimes struggles to focus when surrounded by many people, she said teleworking has been an appealing option.

At the protest, Comissiong said the university’s lack of action — both toward those who have asked for telework and those who have to report in person — is “almost like they’re flexing their might.”

Although AFSCME’s two attempts to deliver the petition thus far have not ended in employees’ desired results, Holden hopes things will change soon.

“We are hoping that the administration will recognize the real need that people are facing … and take steps to recognize workers’ challenges and make remedies,” he said.