No. 25 Maryland baseball finishes regular season with 7-3 loss to Indiana 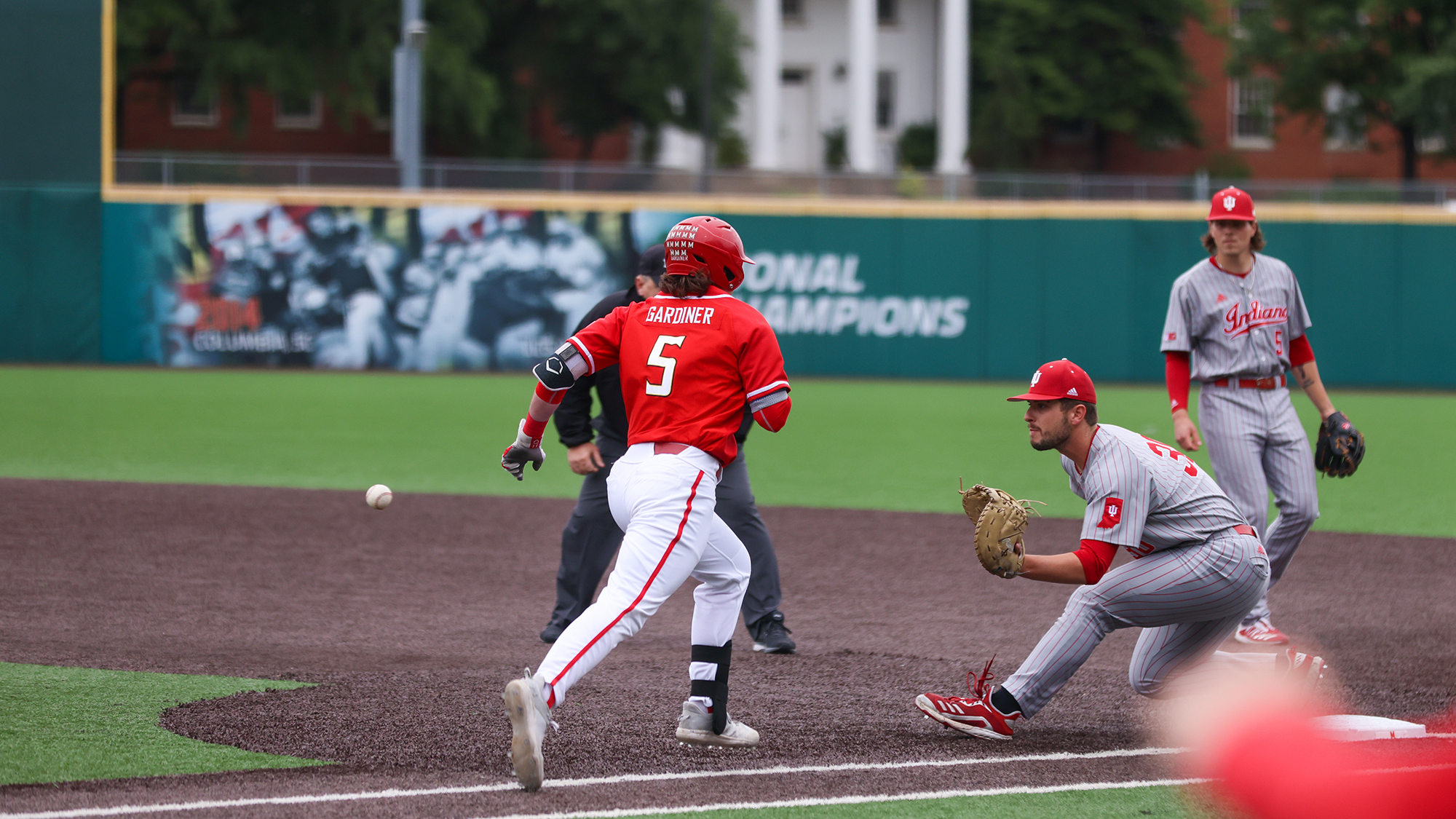 Tommy Gardiner attempts to reach base on a sacrifice bunt during Maryland baseball's 7-3 loss to Indiana on May 30, 2021. (Collin Riviello/The Diamondback)

Eleven upperclassmen framed jerseys sat side-by-side, held tight by their respective family members in admiration of their long Maryland baseball careers. While their final regular season game against Indiana didn’t offer the ending many of them would hope to have, their story isn’t done yet.

An emotional outing with likely no playoff implications for the Terps ended on a sour note as coach Rob Vaughn’s squad fell to the Hoosiers, 7-3.

After 43 grueling games, Maryland entered its regular season finale in prime position. The Terps have probably earned an NCAA tournament bid and rewarded their seniors a year after they had no chance to play at all.

And on Sunday, a few of those seniors showed what the team will be missing next season.

Beginning with a second inning solo homer banged over the wall by Randy Bednar, the seniors dominated the early innings. That same frame saw two runners stranded in scoring position, but it didn’t matter.

“I got to enjoy my last home game at The Bob with my teammates and having my family be in attendance was something special,” Bednar said. “It’s something I’ll remember for the rest of my life, happy that we get to keep on playing.”

Sean Fisher, who entered Sunday having allowed no earned runs in his last 8.1 innings, kept that streak up in the outing. He allowed no runs and four hits white striking out two in three innings. He pitched a bend-but-don’t-break style efficiently, despite allowing runners in scoring position twice.

While Fisher dealt, Chris Alleyne sprinted home after throwing mishaps by Indiana to score the second run of the day in the third inning. Fisher was taken out at the beginning of the fourth in favor of fellow senior Zach Thompson.

“It’s a mix of emotions, kind of sad,” Alleyne said. “Last time I will play a game here with some of these guys but it’s also exciting because we have a bright future.”

With this game meaning much more to the Hoosiers — who entered Sunday on the NCAA tournament bubble — things got out of hand as Vaughn rotated pitchers.

The combination of Thompson and Tyler Blohm allowed four runs and five hits in two-plus innings as Indiana picked up offensive momentum. A two-run homer in the sixth forced Blohm off the mound in favor of Sean Heine, who promptly allowed a solo home run against the first batter he faced.

[Maryland baseball is ranked for the first time in 4 years]

A Ben Cowles RBI double in the seventh provided a bit of hope for Maryland, but the Hoosiers maintained a four-run lead. Still, Sam Bello, one of the more routine pitchers in the Terps staff, provided a boost with a hitless inning in the eighth.

But Maryland’s bats went quietly the rest of the afternoon, and Indiana celebrated one last regular season victory. Still, the Terps used the game as a means to get some of their seniors and bench players into action.

One was Mark DiLuia, who was the highlight of the contest. Pitching through shoulder pain that has held him out all season, DiLuia struck out Paul Toetz on three pitches in the ninth.

“That’s everything right there. Mark’s my best friend,” Alleyne said. “That’s when I started to get a little emotional because it’s really awesome to be able to see him come out there and get the last out of the game.”

And with a postseason run on the horizon, they’ll soon be relegated back to their normal duties. But for one final time at Bob “Turtle” Smith Stadium, it was the seniors’ moment to shine.

“This is one of the most special groups in the history of Maryland baseball,” Vaughn said. “Not a doubt in my mind.”